The 11th Executive Conference of Mayors for Peace was held in, the Vice President City, Hannover, Germany.

President Matsui (Mayor of Hiroshima), representatives from Executive Cities, and Secretary General Koizumi discussed next Vision and Action Plan based on the assessment of the 2020 Vision and the progress of the Action Plan (2017-2020), and attended a peace-related event hosted by the City of Hannover.

Mr. Thomas Hermann, Vice Mayor of Hannover, explained the history of the church, which was destroyed in air raids during WWII, and preserved as a symbol of hope for peace, in a call to inspire participants to build peace together. President Matsui, Vice President Taue, and Vice Mayor Herman laid a flower wreath on the cenotaph, complete with a ribbon bearing the Mayors for Peace logo, before a moment of silence. 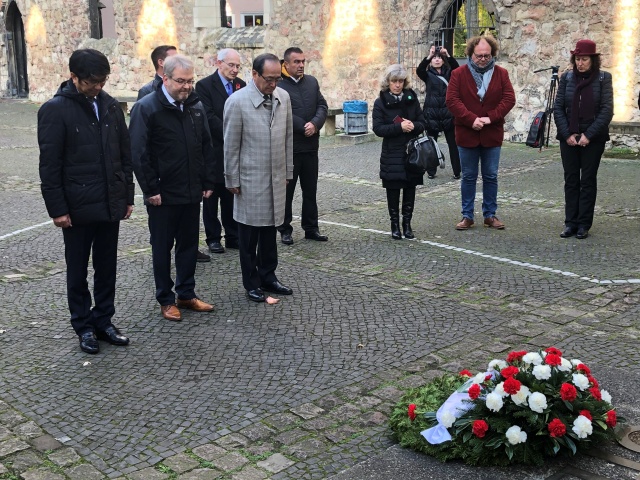 Day 1 of the 11th Executive Conference

Representatives assessed the progression of the 2020 Vision and the initiatives under the Action Plan. They agreed that under the 2020 Vision, many of the member cities had expanded their independent activities for nuclear disarmament with NGOs. President Matsui stated that in order to strengthen and expand network, it is vital that we increase the number of member cities and supporters among cities, and appeal to political leaders to change their policies by generating public support for peace in nuclear armed states and their allies. 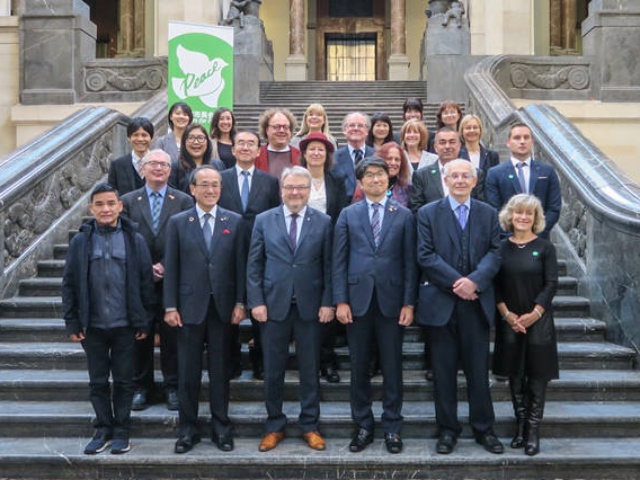 Based on the discussions held in Meeting I, participants discussed how best to lay down the concepts of the new Vision and Action Plans to be launched in 2021. They agreed upon the basic concepts which center on our main objectives: “the realization of a world without nuclear weapons” and “the realization of safe and resilient cities.”

In addition, consensus was reached on the third objective, “the promotion of a culture of peace,” which encourages people to think about peace and take action towards creating peace in their daily lives. It was agreed that discussions would continue until the adoption of the new Vision and Action Plan at the 10th General Conference in August 2020.

Three of the Executive Cities each made a report on their effective peace initiatives: Manchester, UK,Peace education utilizing A-bombed trees; Muntinlupa, Philippines,International Day of Peace event to raise peace consciousness; and Hannover, Germany,Membership recruitment efforts as a Lead City.

After the report, representatives discussed items that Mayors for Peace should prioritize for action until the end of 2020, the final year of the 2020 Vision to ensure the smooth and successful implementation of the next Vision and Action Plan. The Executive Conference decided to set the following three items as priorities for action:
■ Expand membership to support the agreed goals of Mayors for Peace including the entry-into-force of the Treaty on the Prohibition of Nuclear Weapons
■ Conduct peace education to raise awareness among future generations
■ Strengthen support for existing projects to receive youths in Hiroshima and Nagasaki, such as “The Youth Exchange for Peace Support Program.” 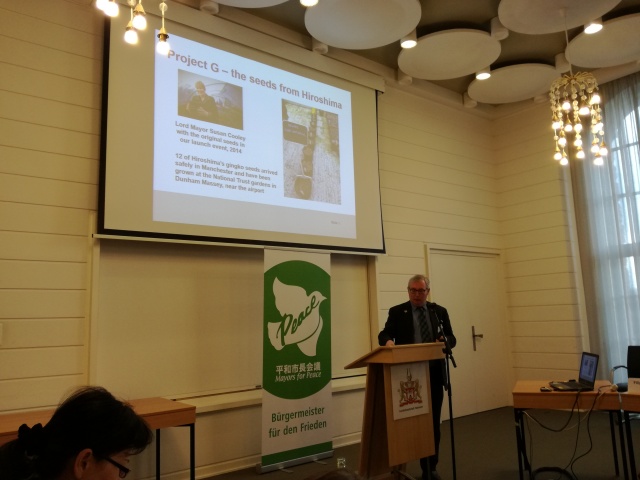 The Executive Conference approved a proposal by the City of Granollers and other European Executive Cities to launch the European Chapter of Mayors for Peace in January of 2020.
In addition, the Secretariat explained the outline of the next General Conference, joining the “PEACE ORIZURU” project for the Tokyo Olympics and Paralympics which is conducted by the Tokyo Organising Committee of the Olympic and Paralympic Games, and working for the 2020 Review Conference. 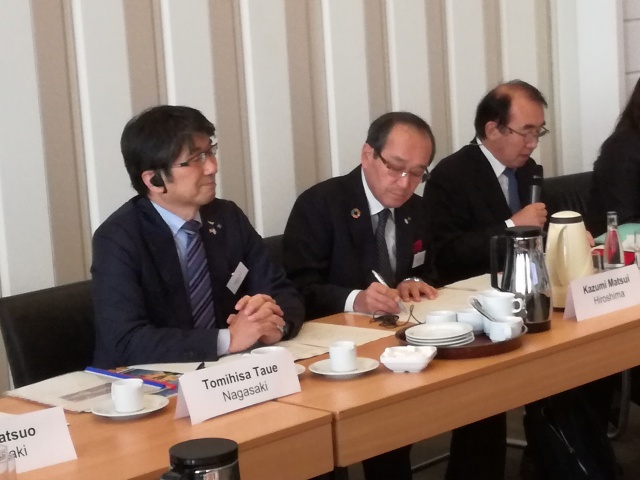 President Matsui gave an address in the beginning of the event, “Renaissance of Nuclear Weapons? Challenges for Europe Security Architecture”, and asked the audience for support and to take action together towards realizing a world without nuclear weapons.

A panel discussion was held for the audience by three speakers, including Ms. Beactice Fihn, Executive Director of ICAN. 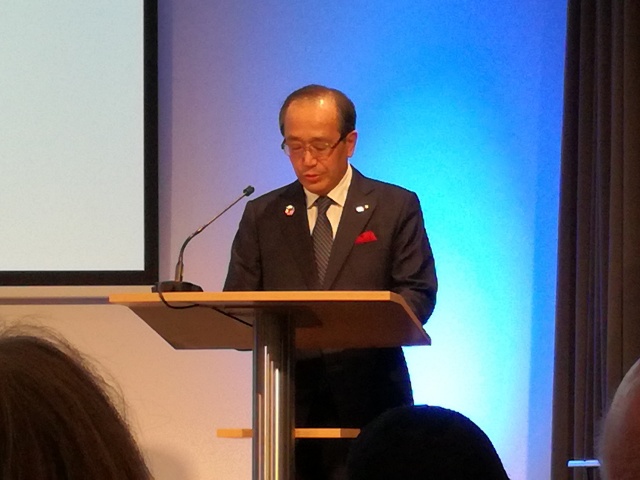 Dinner reception hosted by the City of Hiroshima, Nagasaki, and Hannover

All of the Executive Cities participating in the Conference attended the dinner reception held at the restaurant in the Hannover City Hall. Baumkuchen, a German dessert, was served to commemorate the 100th anniversary of the introduction of baumkuchen to Japan, where it was first baked in Hiroshima by a German prisoner of war. 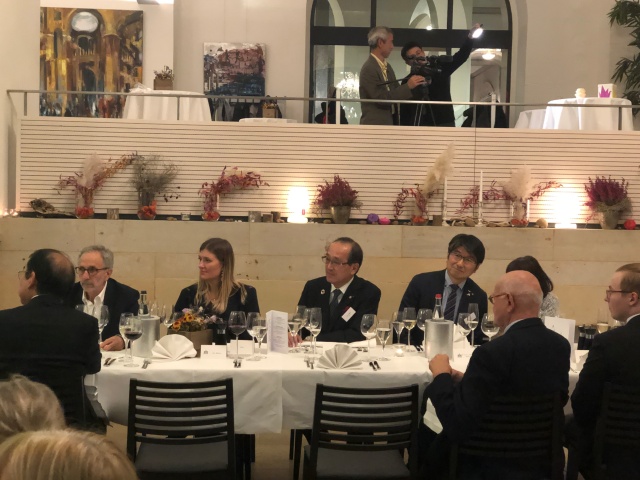 Day 2 of the 11th Executive Conference

The Executive Conference recapped the deliberations of Day 1, and approved theSummary Notes. 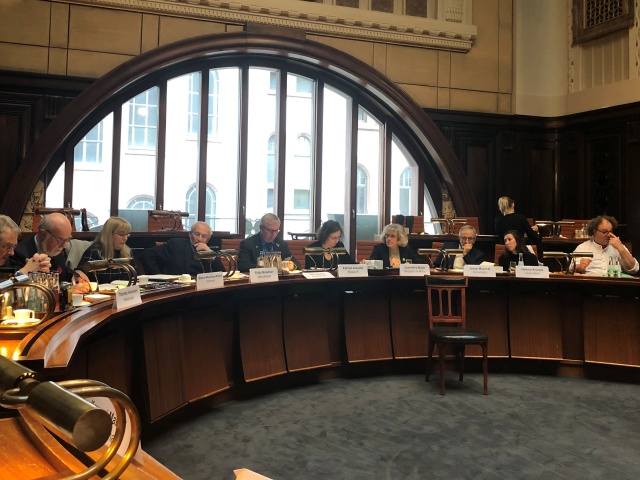 The first meeting was held for the launch of the European Chapter of Mayors for Peace, approved by the Executive Conference on Day 1. At beginning of the meeting, President Matsui stated that it was of great significance to have Lead Cities working together towards the realization of world peace. He also expressed his hope by solidifying the Mayors for Peace network of cities, we may work to seek peace both in Europe and throughout the world.