A Mayors for Peace delegation, including the mayors of Hiroshima and Nagasaki, who serve as the President and Vice President of Mayors for Peace respectively, attended the Second Session of the Preparatory Committee for the 2020 NPT Review Conference held in Geneva, Switzerland. They appealed to the representatives of the UN and national governments for the need for good faith negotiations in accordance with Article VI of the NPT and the importance of promoting the Treaty on the Prohibition of Nuclear Weapons (TPNW) towards the abolition of nuclear weapons. They also requested consideration of and collaboration in the activities of Mayors for Peace. During the PrepCom, Mayors for Peace also hosted a side event titled “Mayors for Peace Youth Forum” and an A-bomb Poster Exhibition.
Following his visit to Geneva, Mayor Matsui, Mayor of Hiroshima and President of Mayors for Peace, visited Paris, France and Gerika-Lumo, Spain. He attended ceremonies in which he presented or planted a seedling of an A-bombed tree, delivering a message from an A-bombed city and sharing our desire for peace.

During his opening remarks, Ambassador Bugajski, Chair of the Second PrepCom, encouraged participants of the session to “not only talk but also listen to each other with respect and an open mind,” as well as to “constantly look for what unites us and for practical solutions.” 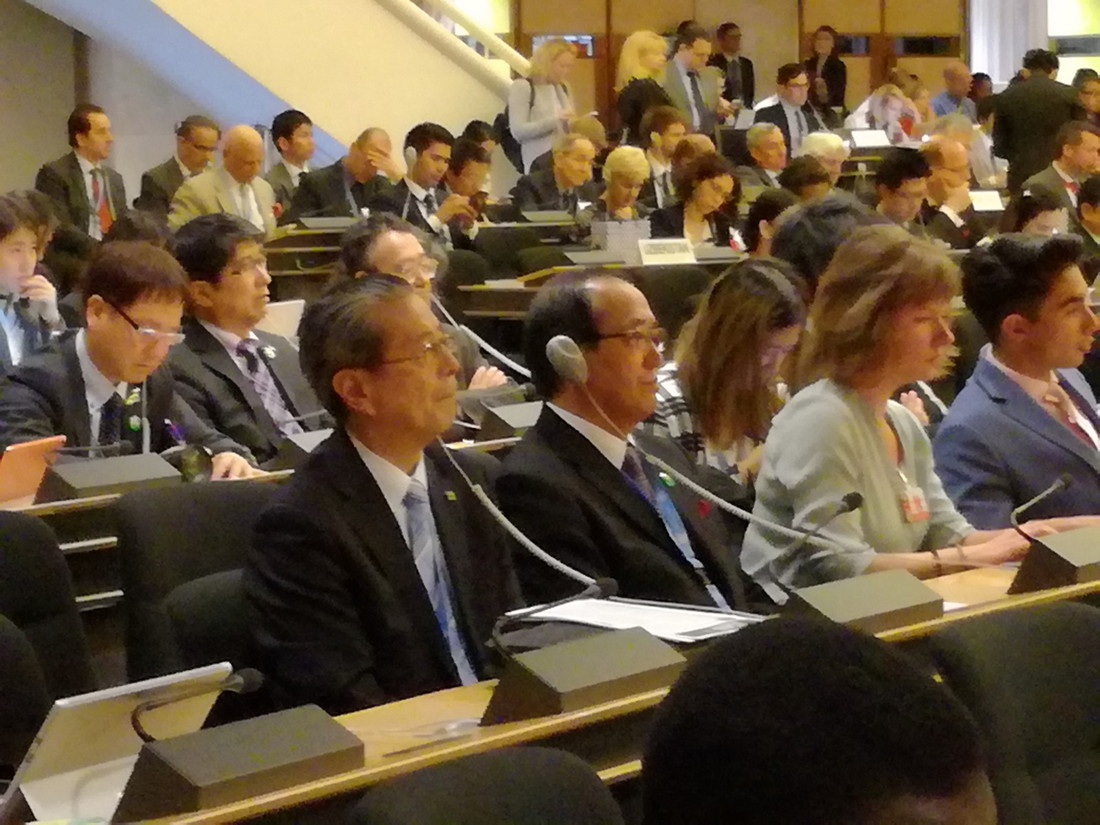 In 2016, Mayors for Peace presented the United Nations Office at Geneva with a seedling of a Ginkgo tree whose mother tree had been exposed to the A-bomb in Hiroshima. President Matsui and Secretary General Komizo visited the tree in the compound of the UNOG and they were pleased to see it steadily growing. 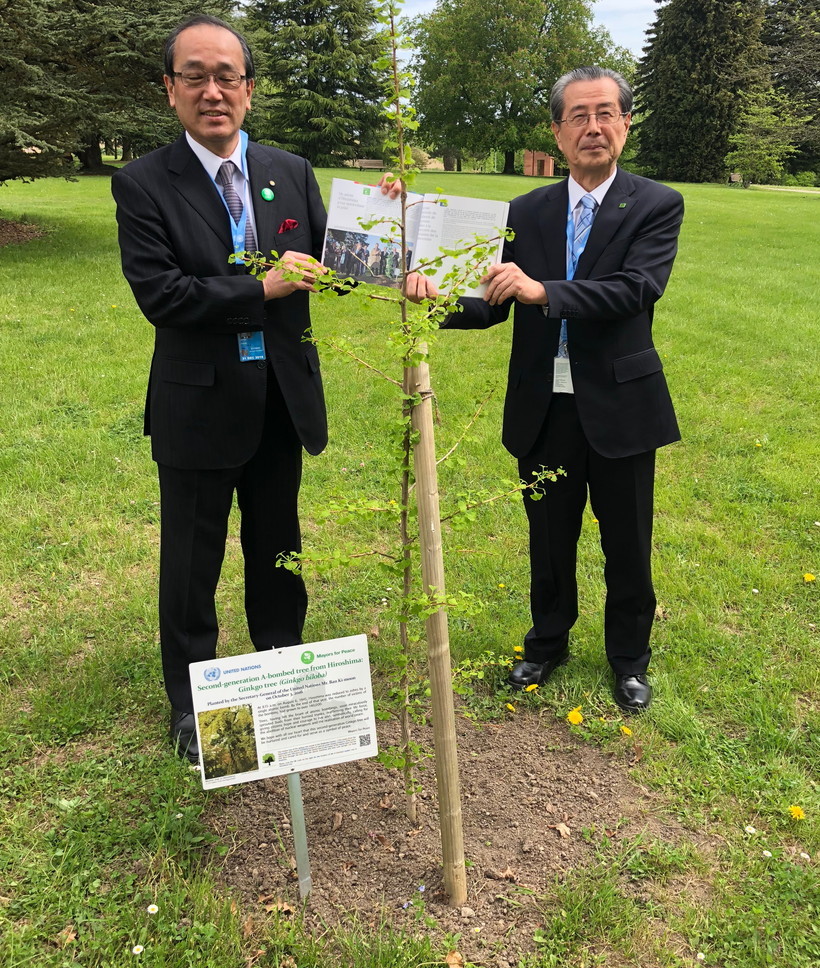 Lunch with the Manager of UNITAR’s Decentralized Cooperation Programme

President Matsui shared with Mr. Alex Mejia, Manager of UNITAR’s Decentralized Cooperation Programme, the collaboration between UNITAR Hiroshima Office and Mayors for Peace in the “Green Legacy Hiroshima Initiative”, which distributes seeds and seedlings from A-bombed trees to cities around the world.

Meeting with Mayor of Geneva

President Matsui and Vice President Taue met Mr. Rémy Pagani, Mayor of Geneva. They expressed their hope that the City of Geneva, a Mayors for Peace member city, will decide to become Lead City of Switzerland and will further promote Mayors for Peace initiatives including membership expansion and collaboration with other influential cities in the country. 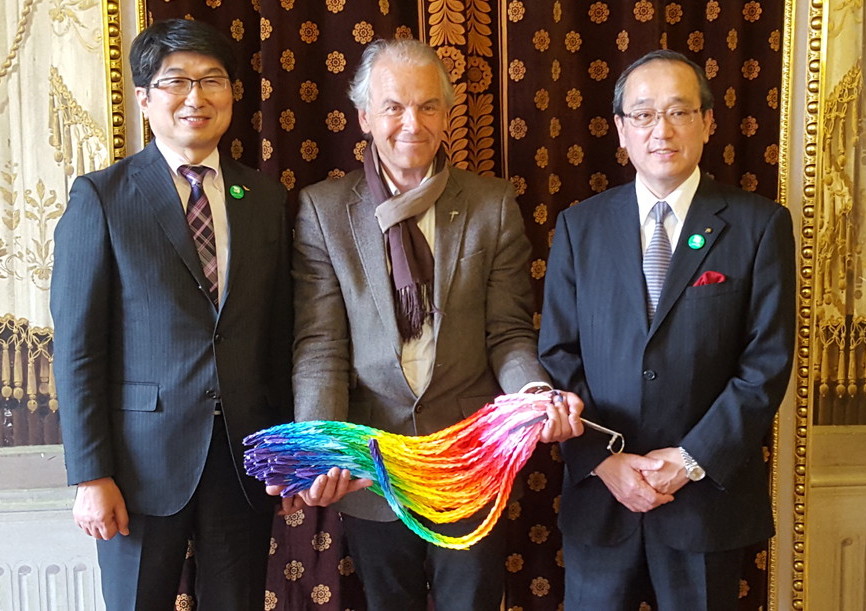 Meeting with Vice President of ICRC

At the meeting, it was confirmed that Mayors for Peace and ICRC will continue to collaborate as close partners working for the same goal of abolishing nuclear weapons based on the approach of human security. 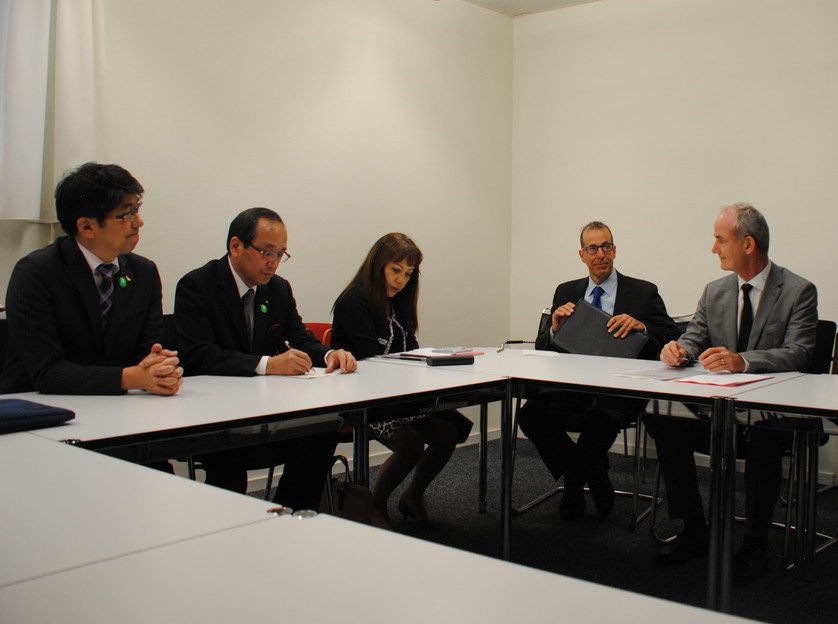 Meeting with the Chair of the Second NPT PrepCom

Ambassador Adam Bugajski of Poland, Chair of the Second PrepCom, shared his views that regardless of their political positions, all states, together with the civil society, should work to advance towards the goals of the NPT, while raising awareness about the threat of the use and possession of nuclear weapons. President Matsui expressed his hope that the nuclear armed states and their allies would accept the will of the A-bombed cities. Vice President Taue referred to the Mayors for Peace A-bomb Poster Exhibition held as a side event to the PrepCom and expressed his hope that the PrepCom participants would visit the exhibition to learn what happened in Hiroshima and Nagasaki at the time of the atomic bombings. 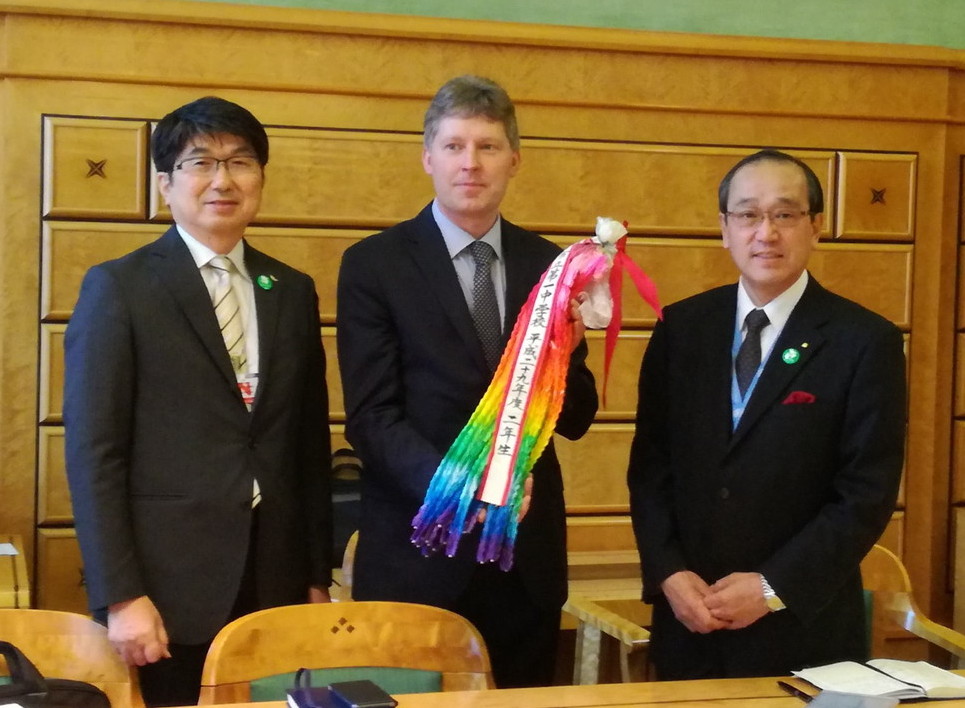 Mayors for Peace sent to the PrepCom eight Japanese high school students who supported the activities of MfP by participating the petition drive “No nuclear weapons from Hiroshima / petition campaign”. The students had the opportunity to meet Ms. Elayne Whyte Goméz, Permanent Representative of Costa Rica to the UN Office at Geneva, who served as the President of the UN conference that adopted the TPNW last year and handed her a certificate of signatures. Ambassador Whyte responded with warm words of encouragement to the students.

During the meeting that followed, President Matsui expressed his hope that he would be able to take this opportunity to share with PrepCom participants the hibakusha’s earnest message that “no one shall ever suffer again as we have.” The Mayors for Peace delegation met with Dr. Christopher Ford, Assistant Secretary, Bureau of International Security and Nonproliferation, U.S. Department of State. Dr. Ford expressed his view that all states should engage in effective and constructive dialogue to advance nuclear disarmament. Speech at NGO session of PrepCom 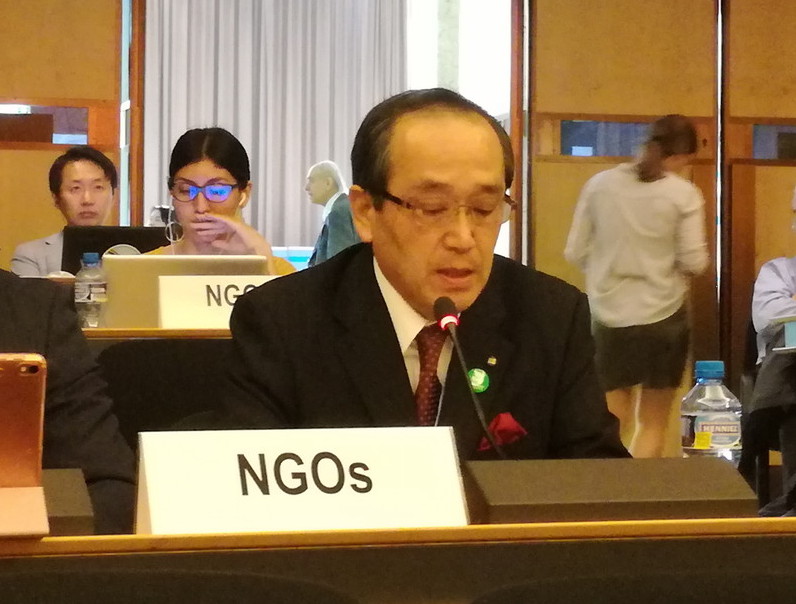 The European Mayors for Peace meeting

Representatives of 7 executive cities in Europe took this opportunity to host a meeting to discuss the further development of Mayors for Peace activities in Europe, which has the largest concentration of executive members. The Mayors for Peace delegation had a meeting with Ambassador Elisabeth Tichy-Fisslberger, Permanent Representative of Austria to the United Nations Office at Geneva. President Matsui said that he hopes to increase Mayors for Peace member cities in nuclear armed states to gain enough influence to have their national leaders change their policy toward the TPNW. 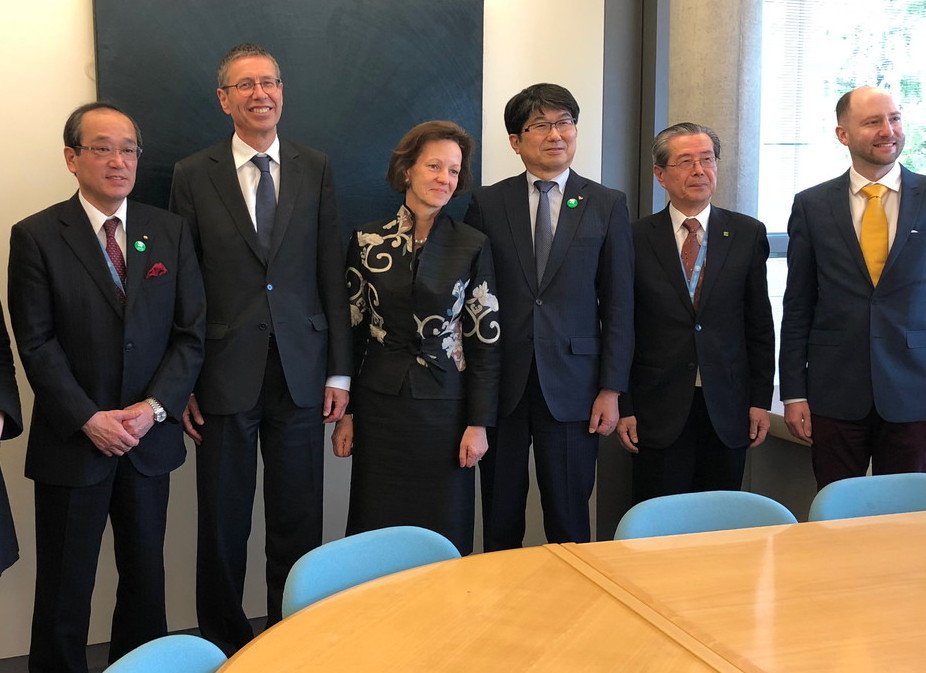 President Matsui introduced the work of Mayors for Peace to national Red Cross and Red Crescent Societies from around the world and expressed his hope that Mayors for Peace will develop further cooperation with ICRC and other international peace organizations. Youth presenters from Hiroshima, Okinawa, and Nagasaki representing Japan; from Manchester, UK and Granollers, Spain representing two additional Mayors for Peace Executive Cities; and from PAX and INESAP representing NGOs all made presentations on their efforts and wishes for peace. 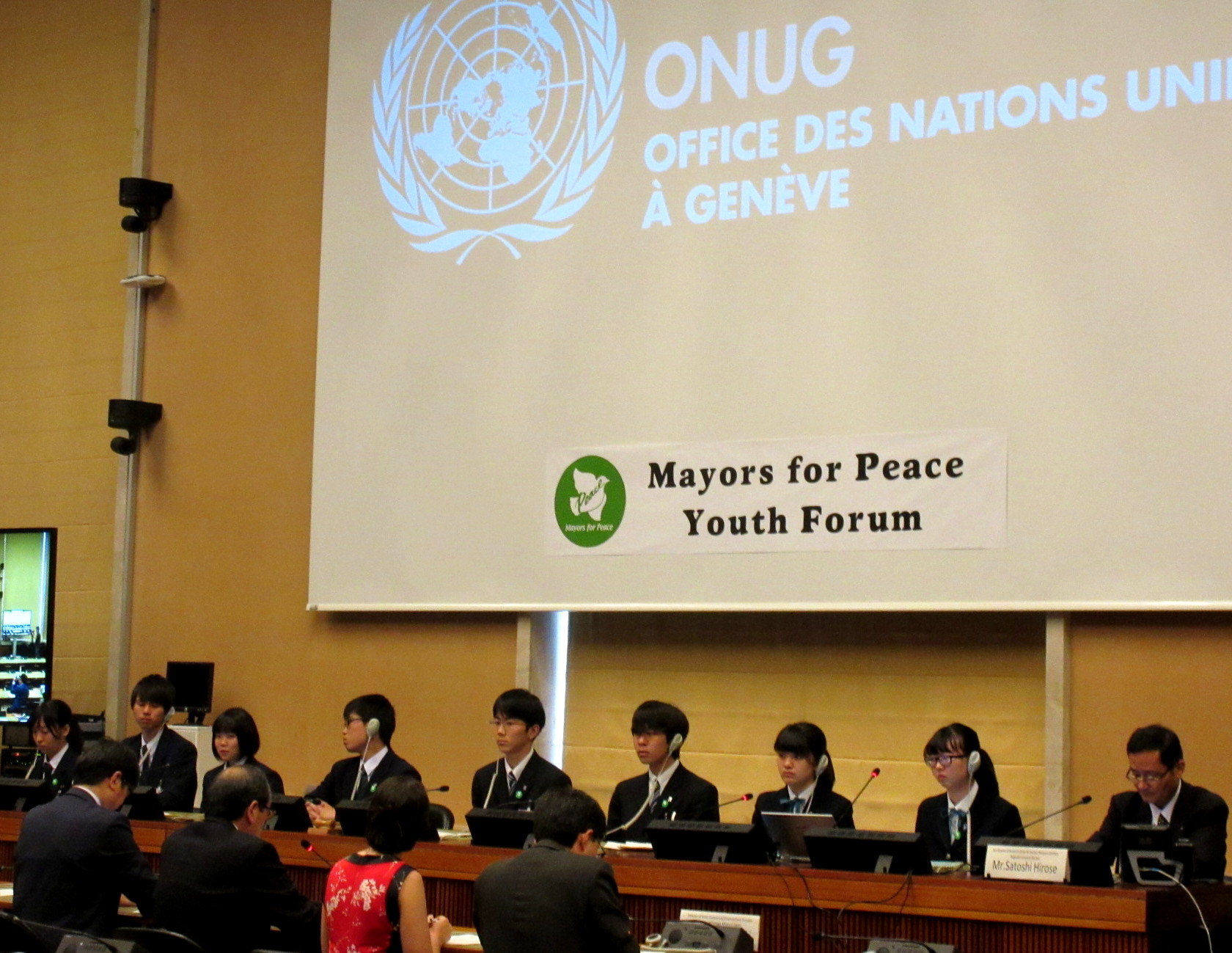 The 10th Executive Conference of Mayors for Peace

To coincide with the PrepCom, representatives of 10 executive cities gathered in Geneva for the 10th Executive Conference of Mayors for Peace and discussed the promotion of the Mayors for Peace Action Plan (2017-2010) adopted at the General Conference last year. The participants engaged in active discussion on strengthening activities in each region led by lead cities and also on strategies to promote membership expansion. 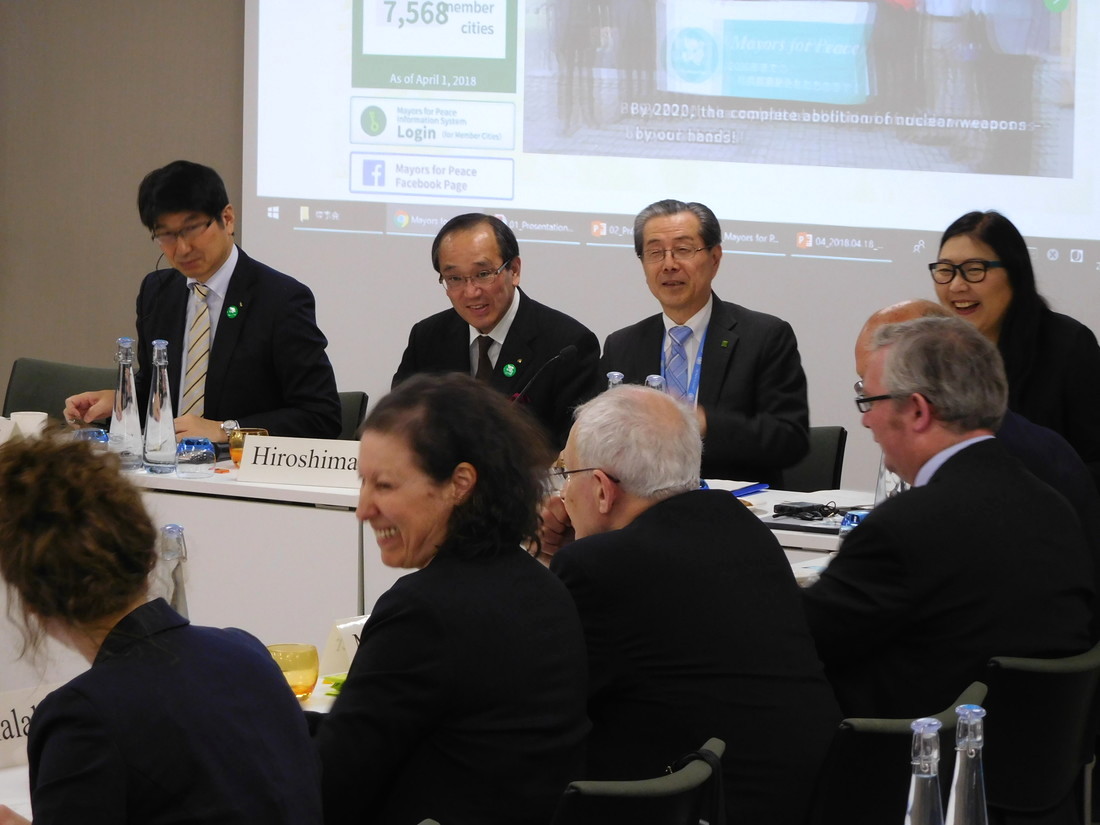 Dinner hosted by the City of Geneva Mayors for Peace hosted a poster exhibition at the United Nations Office at Geneva, where the PrepCom was held, aiming for the PrepCom participants to deepen their understanding of the reality of atomic bombings. 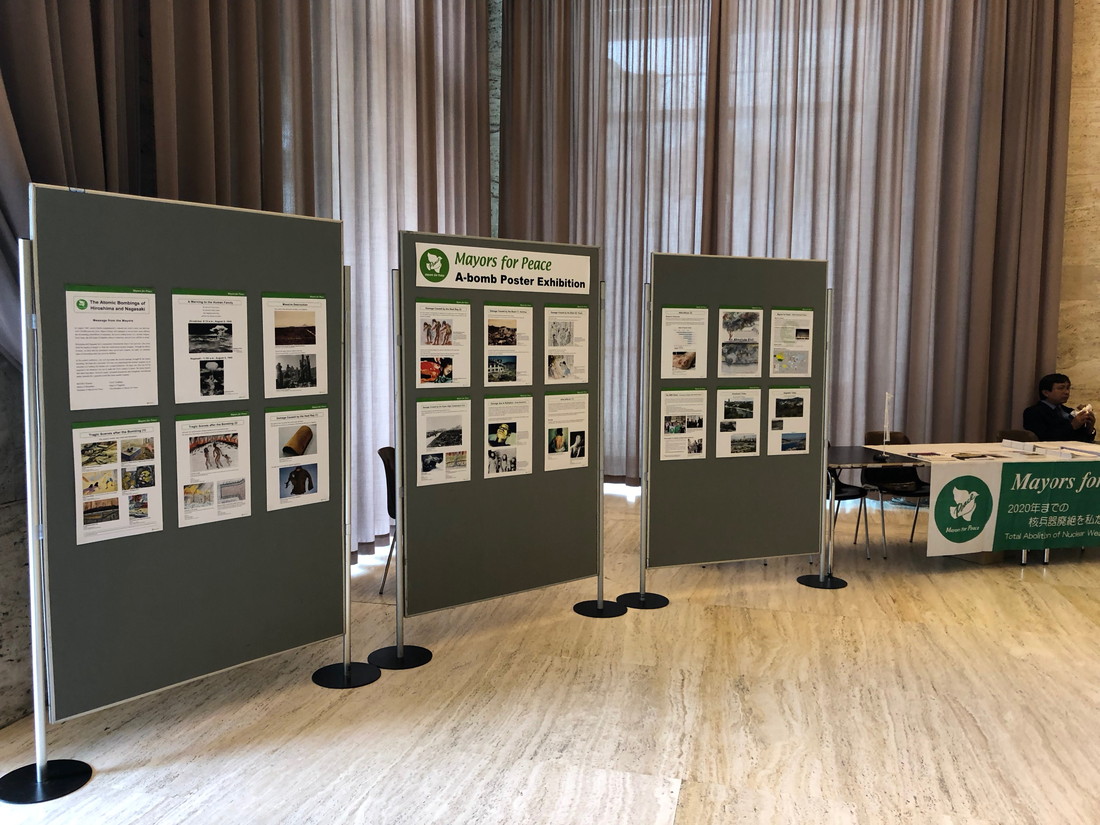 Lunch with the Ambassador of Japan to France

During the meeting, Ambassador Masato Kitera mentioned that he attended the A-bomb exhibition held in a public archive near Paris and shared his view that everyone should visit Hiroshima at least once. 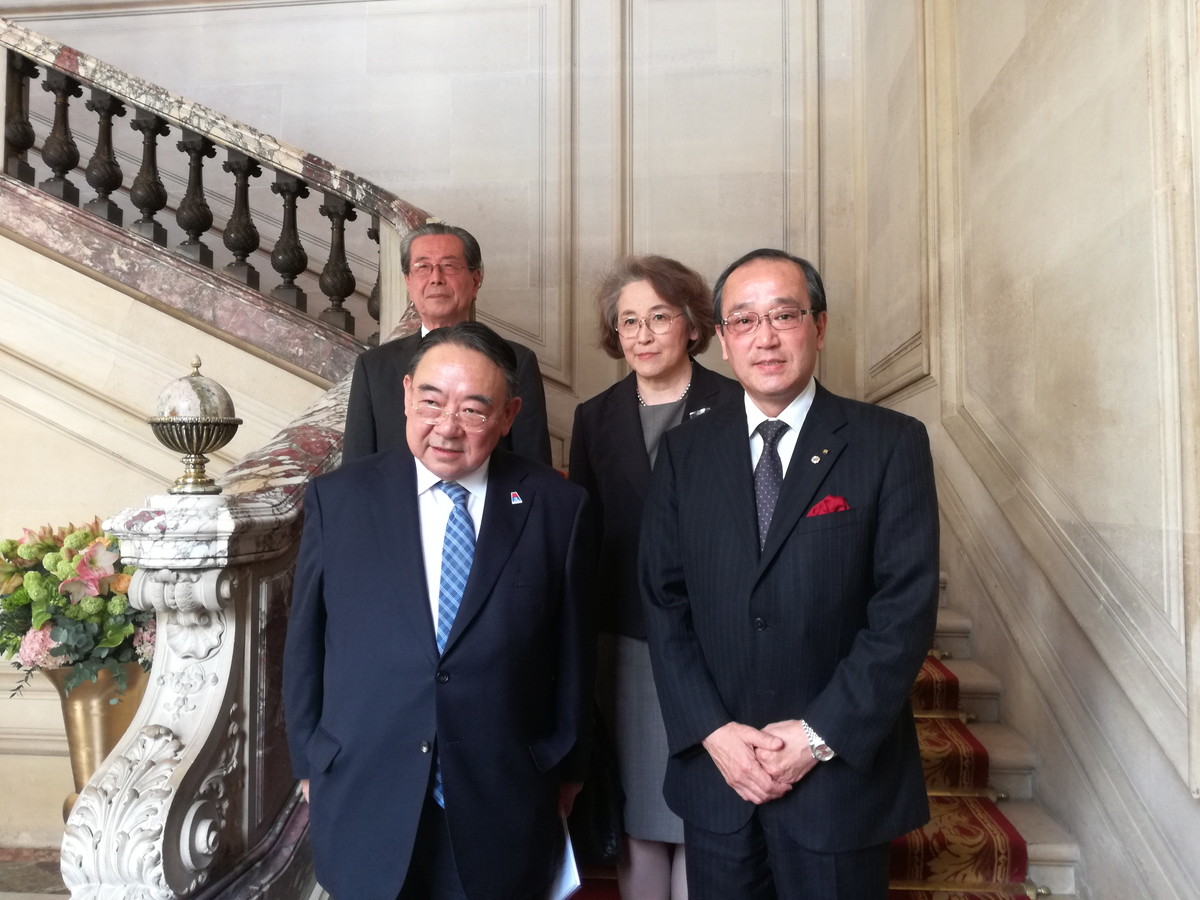 President Matsui met with Mr. Cibot, Executive Officer of AFCDRP-Maires pour la Paix France (Mayors for Peace French Chapter) and Mrs. Cibot, a Hiroshima Peace Ambsassador. Mrs. Cibot pointed out that it was significant that a seedling of an A-bombed tree from Hiroshima would be presented to Paris, at a time when the French government continues with developing and modernizing nuclear weapons.

Meeting with Vice Mayor of Paris

Prior to the donation of a second-generation A-bombed Gingko tree to Paris, President Matsui had a meeting with Mr. Mao Peninou, Deputy Mayor of Paris. President Matsui expressed his hope that taking care of the tree will raise awareness among the people of Paris about lasting world peace and contribute to increasing the momentum for nuclear abolition in France. President Matsui handed the potted seedling to Deputy Mayor Peninou of Paris with the presence of distinguished guests, including Ms. Alaudat, Deputy Mayor of Makakoff, a Vice President City of Mayors for Peace, the city that generously offered one of the seedlings they have been growing for this occasion; Mr. Rio, Mayor of Grigny who serves as the President of AFCDRP-Maires pour la Paix France; Mr. Cibot, Executive Officer of AFCDRP and Mrs. Cibot, a Hiroshima Peace Ambsassador.

During the ceremony, Deputy Mayor Peninou expressed his hope that Paris will develop further collaboration with Hiroshima, utilizing the Ginkgo tree as a symbol of friendly relationships between the two cities. President Matsui said “I hope that as the seedling grows as a symbol of peace seeking efforts, so will the wish for peace among the citizens of Paris.” Visit to the Guernika Peace Museum and Welcome dinner

President Matsui traveled from Paris to Guernika-Lumo, which suffered indiscriminate bombing in 1937 during the Spanish Civil War, and paid a visit to the peace museum in the city. He also attended a dinner hosted by the City of Guernika-Lumo. Ms. Maria Uribe, Deputy Mayor of Guernika-Lumo and other participants warmly welcomed Mr. Matsui as a guest from Hiroshima, a city that shares in a common wish for peace as Guernika. President Matsui attended a welcome event hosted by Mr. Jose María Gorroño, Mayor of Guernika-Lumo. President Matsui expressed his hope with Mayor Gorroño for their cities to develop further collaboration based on their common wish for lasting world peace as both cities share the tragic experience of having suffered indiscriminate bombings against civilians. Afterwards, Mayor Gorroño took President Matsui on a tour of his city, guiding him to “The Tree of Guernika”, a symbol of peace just like A-bombed trees in Hiroshima, and also to buildings and shelters that survived the bombing of 1937. Welcome event hosted by the President of the Biscay Parliament

Ms. Ana Otadui, President of the provincial parliament in Biscay, gave a warm greeting to President Matsui, saying that she hopes that Guernika and Hiroshima will work together to take steps toward peace, showing respect to the victims of the bombings. 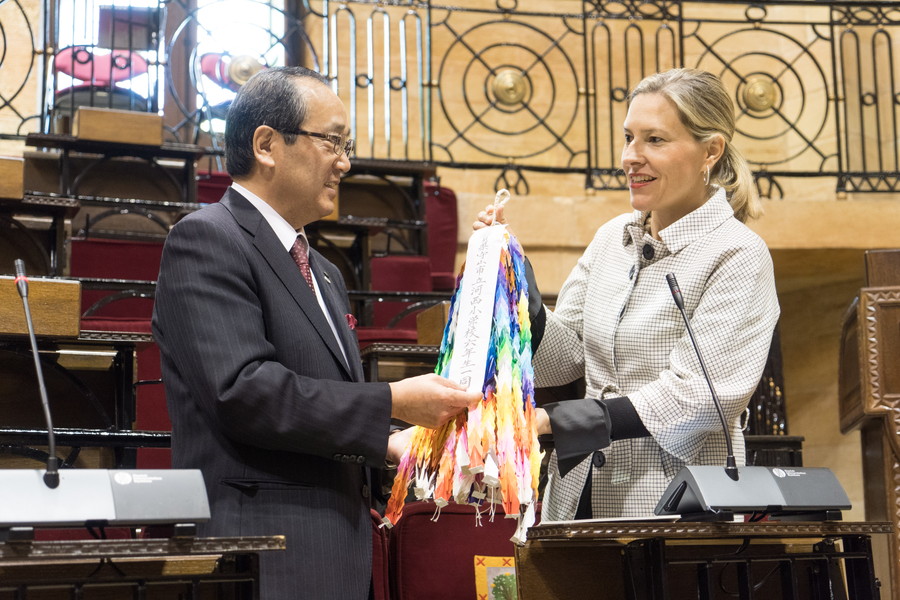 President Matsui attended a planting ceremony which took place in a park located behind the Biscay Parliament. Among the guests who joined the planting was Mayor Mayoral of Granollers. Granollers, a Vice Presdent City and the Lead City of the Catalan Chapter of Mayors for Peace has been actively nurturing A-bombed Gingko trees from Hiroshima and contributed one of their seedlings for this occasion. The ceremony served as a great opportunity to show the solidarity of the Mayors for Peace network. 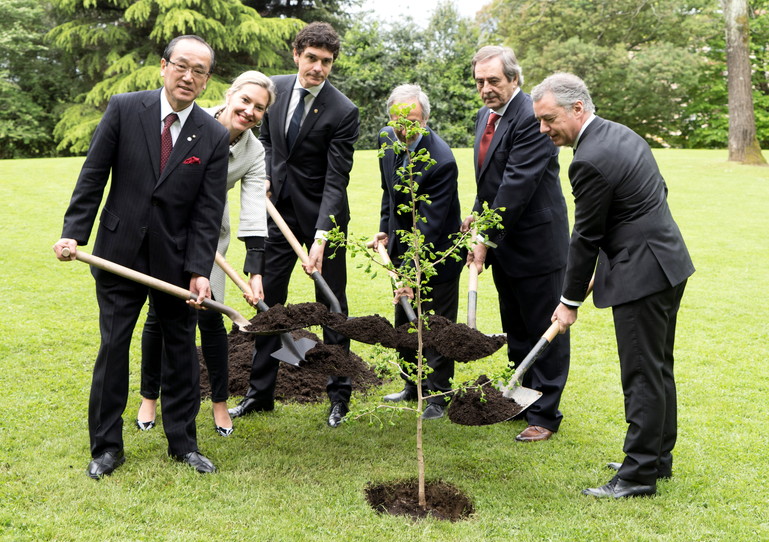