At the UN High Level Forum on The Culture of Peace convened by the President of the 75th Session of the UN General Assembly at the UN headquarters in New York on September 7th (10 am to 6 pm local Time), a video message from Mayors for Peace’s President Kazumi Matsui, who is also the Mayor of Hiroshima, was broadcasted during the panel discussion. Mayor Matsui was invited by the President of the UN General Assembly, H.E. Mr. Volkan Bozkir, to offer a message on this occasion.

In line with the Declaration and Programme of Action on a Culture of Peace, which was adopted at the UN General Assembly in September 1999, this High Level Forum has been held every year since 2012 with the aim of promoting the culture of peace. H.E. Ambassador Anwarul Chowdhury, who served as Chair of the panel discussion, welcomed the new objective set forth by Mayors for Peace, which is to “promote a culture of Peace,” as one of the objectives under a “Vision for Peaceful Transformation to a Sustainable World (PX Vision)” that was adopted in July this year, and this opportunity was made possible.

Mayor Matsui offered a brief introduction of the new objective. An excerpt from the video is as follows:
“In order to break the status quo in which tensions between nation states are rising, we need to create an environment where policymakers have no other choice than to shift from their nation-minded approach to a human-centered one by building a consensus in favor of the abolition of nuclear weapons. To do this, cultivating a culture of peace—a culture in which the everyday actions of each person are grounded in thinking about peace—is essential. That’s why Mayors for Peace introduced a new objective, ‘promote a culture of peace.’”

A recording of the panel discussion is available on the UN WebTV via the link below.
(Mayor Matsui’s message starts at the 24’10” mark.)
https://media.un.org/en/asset/k12/k1207gqgdn 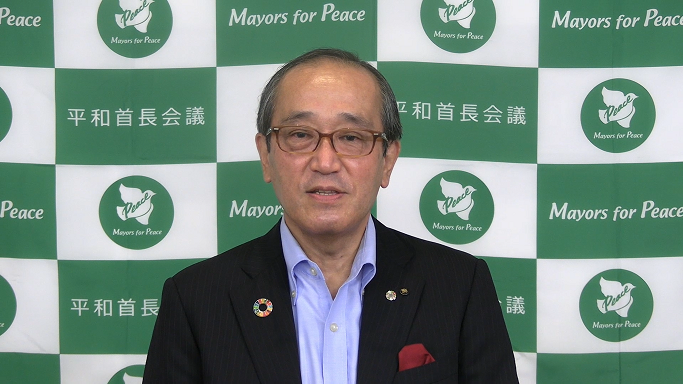