Mr. Takashi Koizumi, Secretary General of Mayors for Peace, visited Geneva, Switzerland while in Europe for the 11th Executive Conference. While there, he met with representatives from the UN, government, and international organizations, and asked for their understanding and future cooperation with Mayors for Peace leading up to next year’s critical NPT Review Conference.

Secretary General Koizumi met with Ms. Elayne Whyte Gomez, Permanent Representative of Costa Rica to the UN Office at Geneva, and explained that although the 2015 NPT Review Conference suffered a setback due to turmoil in the Middle East, Mayors for Peace still has over 1,000 member cities in Iran, which is a positive sign in the eyes of civil society. He also told Ambassador Whyte that he is confident that she will work to achieve the entry into force of the Treaty on the Prohibition of Nuclear Weapons (TPNW), and focus her efforts on next year’s NPT Review Conference. 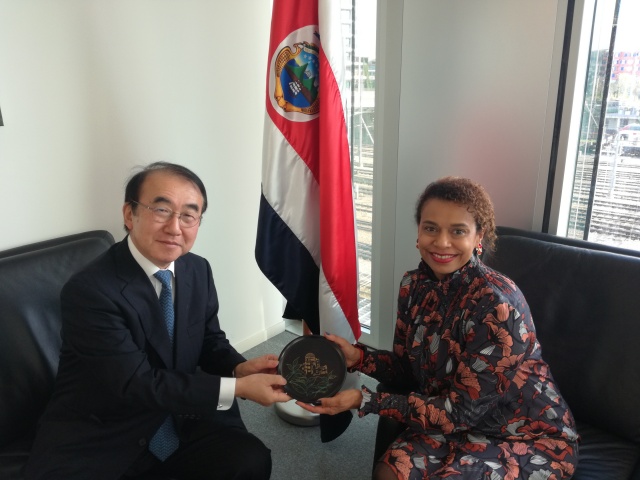 Ms. Kathleen Lawand, the head of Arms Unit Legal Division, stated her strong concerns about the termination of the Intermediate-Range Nuclear Forces (INF) Treaty which may make it difficult to regulate nuclear weapons by law, and that in this light, the TPNW is our best hope. In addition, she stated that as the targets of nuclear weapons are cities, the initiatives and actions of Mayors for Peace as a worldwide network of cities is absolutely important. Secretary General Koizumi asked her for continued support of Mayors for Peace and all of their activities.

In addition, Secretary General Koizumi paid a visit to the second-generation of A-bombed ginkgo tree, which is flourishing on the ICRC grounds under their care. 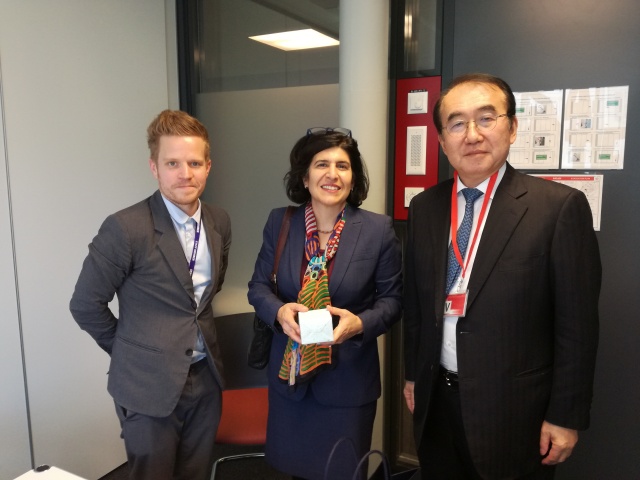 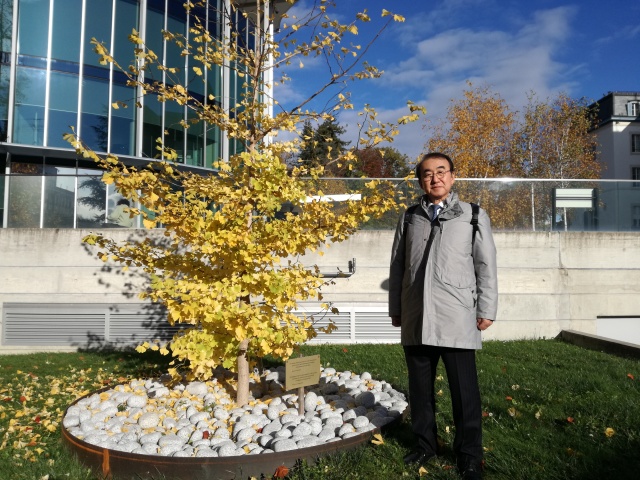 During his meeting with Dr. John Borrie, Research Coordinator of UNIDIR, Secretary General Koizumi stated that it is important to work for nuclear abolition in solidarity with civil societies, international organizations and NGOs.

Dr. Borrie stated that even though next year will be the 50th anniversary of the NPT entry into force, the situation of nuclear disarmament remains challenging. He added that the situation is much the same for the TPNW, causing a rift between nuclear and nonnuclear states. What is important, he said, is to generate public demand for nuclear disarmament. 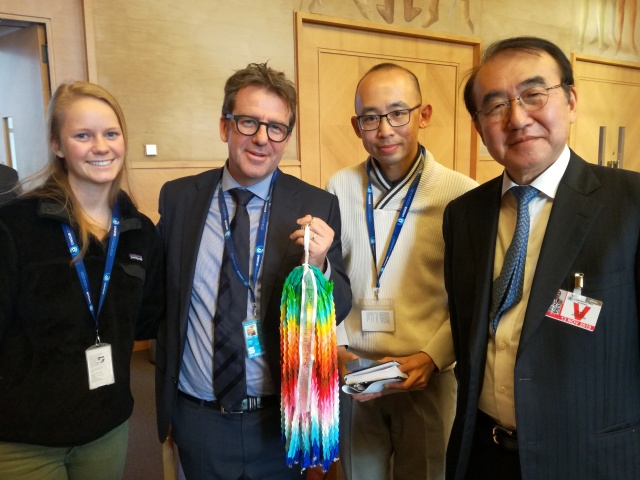 Meeting with Director-General of the UN Office at Geneva

Secretary General Koizumi met with Ms. Tatiana Valovaya, the Director-General of the UN Office at Geneva, and explained that the objectives of Mayors for Peace coincide with the targets of UN’s SDGs. He also expressed his hope to appeal for nuclear abolition to the world at the 10th General Conference of Mayors for Peace and the Tokyo Olympics in 2020. Director-General Valovaya recognized that 2020, the 75th anniversary of the atomic bombings of Hiroshima and Nagasaki, will be an important year for Mayors for Peace, and voiced her commitment to support Mayors for Peace. In addition, she also spoke of the importance of informing younger generations about what happened in Hiroshima and Nagasaki.

After the meeting, Secretary General Koizumi visited the second-generation of A-bombed ginkgo tree which planted in the courtyard of the UN Office. 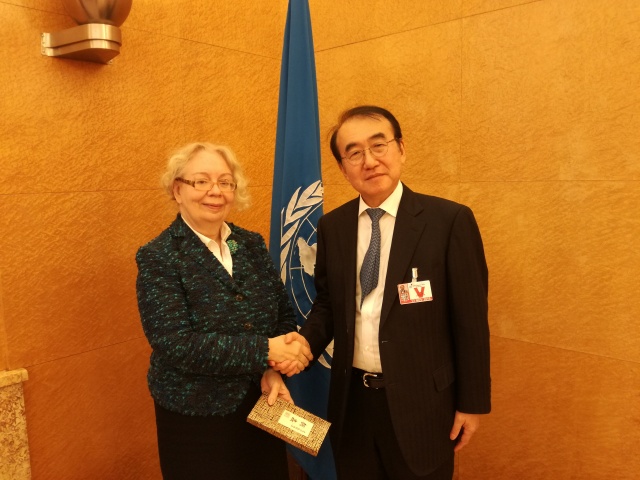 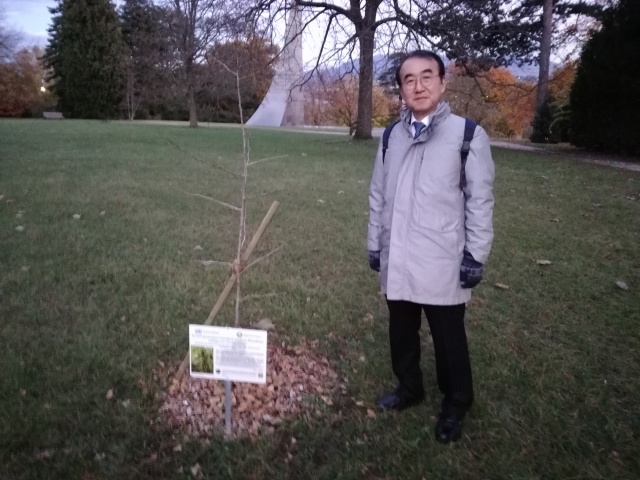 Dinner with Japanese Ambassador Extraordinary and Plenipotentiary, and Permanent Representative to the Conference on Disarmament

Ambassador Nobushige Takamizawa spoke of how once again, Japan’s resolution on nuclear disarmament was adopted by the First Committee of the United Nations General Assembly this year. He also explained that the resolution was created without fundamentally adhering to previous resolutions, in the hopes of leading next year’s NPT Review Conference to success, despite the various opinions in regard to the resolution itself.

Ms. Beatrice Fihn, the Executive Director of the ICAN, spoke of her gratitude for the cooperation between ICAN and Mayors for Peace. She also stated that Mayors for Peace objective “the realization of safe and resilient cities for nuclear abolition” is what inspired the ICAN to launch the ICAN Cities Appeal. 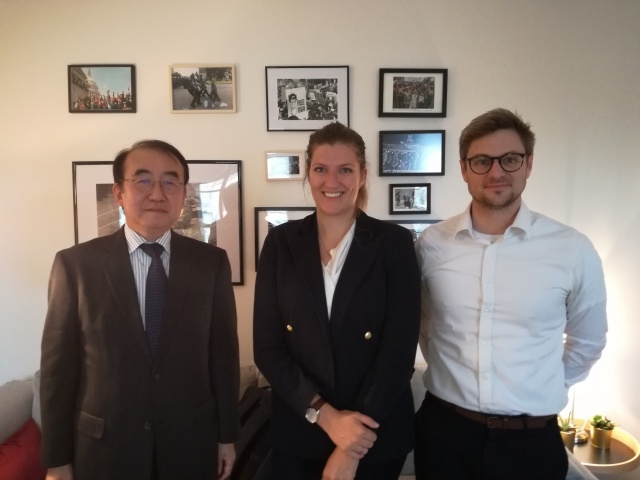