Mayors for Peace sent a delegation to the first Preparatory Committee for the 2020 NPT Review Conference in Vienna, Austria and called for the implementation of the Article Ⅵ obligation of the NPT and asked for the appreciation of and cooperation with MfP activities. As side events, MfP organized an A-bomb poster exhibition and a Youth Forum.

Secretary General Yasuyoshi Komizo explained MfP activities for the abolition of nuclear weapons to Executive Secretary Lassina Zerbo.
Dr. Zerbo expressed the appreciation for our activities and stated that he will support them. 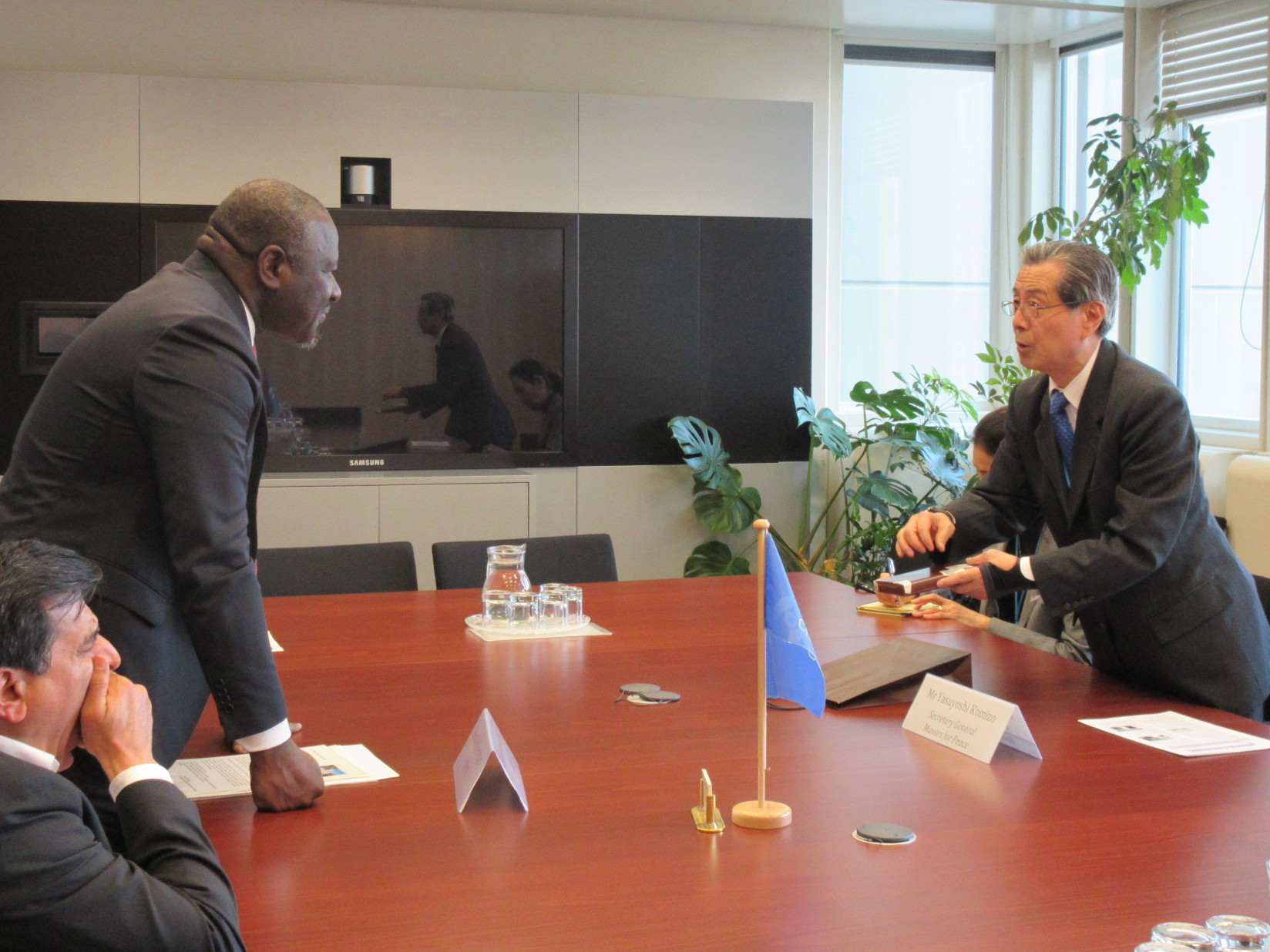 Secretary General Yasuyoshi Komizo and Director General Amano exchanged views about how to proceed with the activities of MfP and IAEA respectively in an increasingly intensified rift regarding the abolition of nuclear weapons. 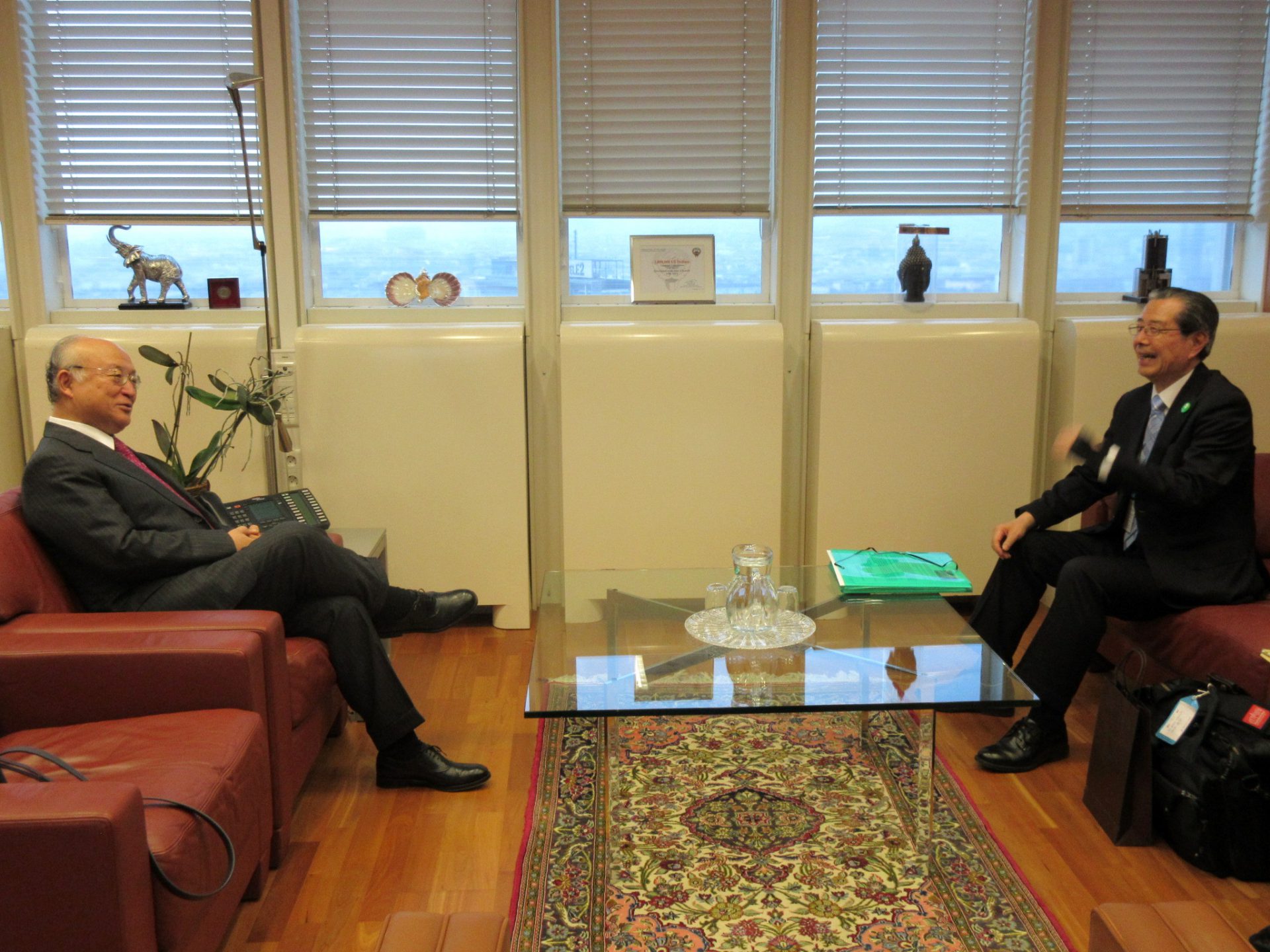 Secretary General Yasuyoshi Komizo delivered a speech on behalf of Mayor Matsui, President of Mayors for Peace.
He re-emphasize the importance of the obligation to negotiate nuclear disarmament in good faith as Article VI stipulated and called on world leaders to take the initiative to create a new security framework while deepening their mutual understanding. Following Mr. Komizo, Mayor Taue also delivered a speech and sent a message that we should not assume that a nuclear prohibition treaty is impossible and we must have the courage to participate in the negotiations. 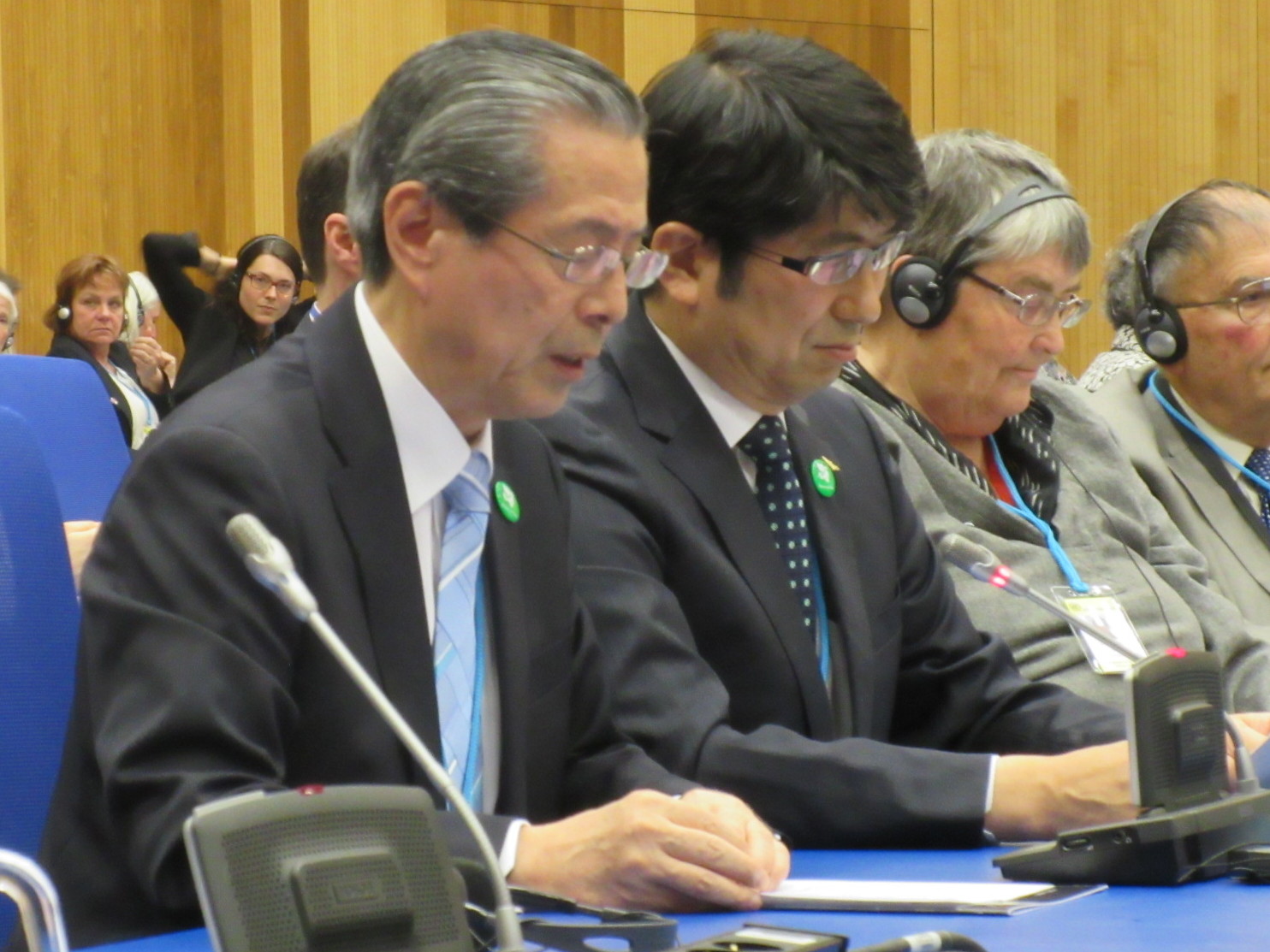 Mayor Taue and Secretary General Yasuyoshi Komizo visitied the Austrian ministry of foreign affairs and exchanged views with Dr. Linhart. He expressed his hope to contribute to realizing a world free from nuclear weapons. 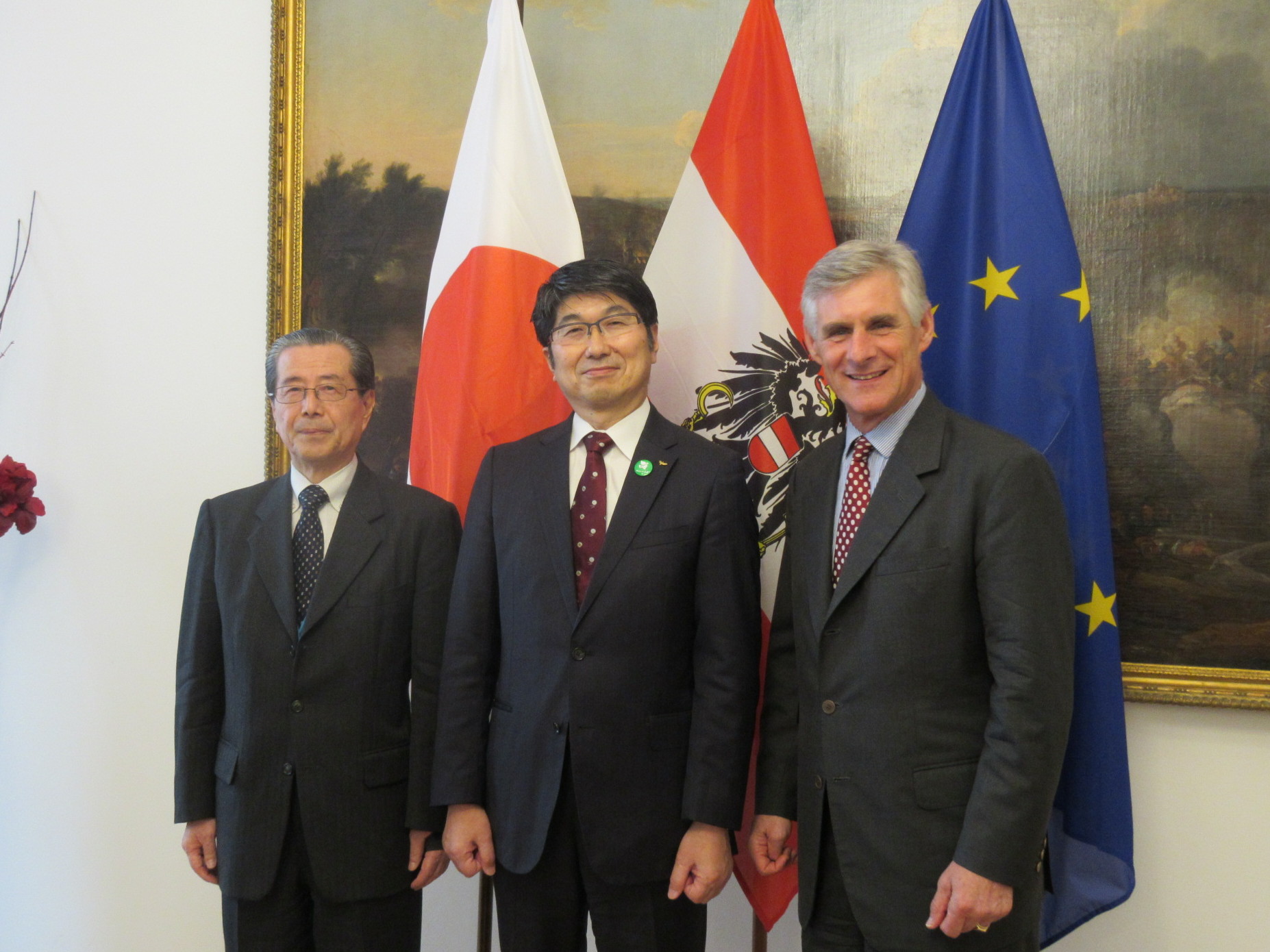 Meeting with Ambassador Kitano, Permanent Mission of Japan to the International Organizations in Vienna and others

The Mayor for Peace Delegation met with Ambassador Kitano and other officials. The delegation members expressed their hope for the Japanese government to support the earnest wish of A-bomb survivors and take concrete actions to realize a world free from nuclear weapons.

Meeting with Ambassador Henk Cor van der Kwast, Chair of the first session (Netherlands) and handing a certificate of signatures

Mayors for Peace sent eight Japanese high school students who supported the activities of MfP by participating in a drive for “No nuclear weapons from Hiroshima / petition campaign” to the first Preparatory Committee. One of them handed a certificate of signatures to Mr. Henk Cor van der Kwast, the Chairman of the 2017 PrepCom. He expressed his expectations for the younger generations.

Following the presentation of a certificate, the delegation exchanged their opinions with the Committee Chair. Mayor Matsui expressed his hope for the next round of UN negotiations for a nuclear prohibition treaty, saying that nuclear and non-nuclear weapons states must overcome their difference and make their utmost efforts for the success of the negotiations. 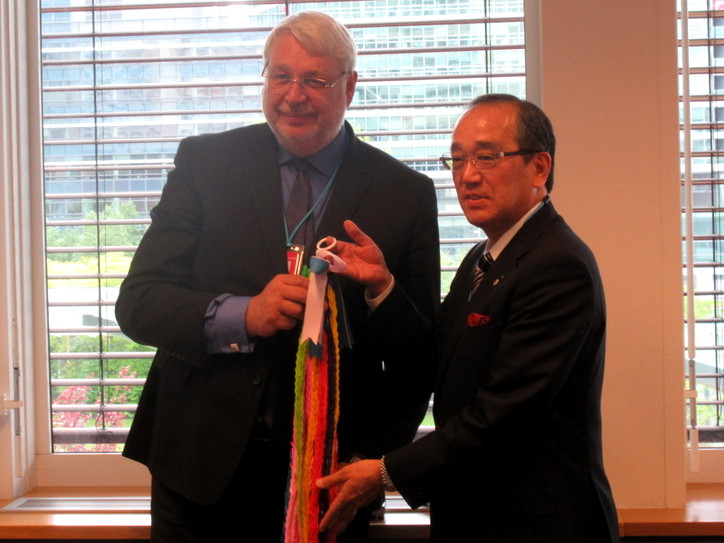 Disarmament Ambassador Franz Josef Kuglitsch agreed with our views that nuclear deterrence is no longer an effective security policy, and expressed his hopes for a wider membership to the prohibition treaty, for which strong support from civil society is indispensable. 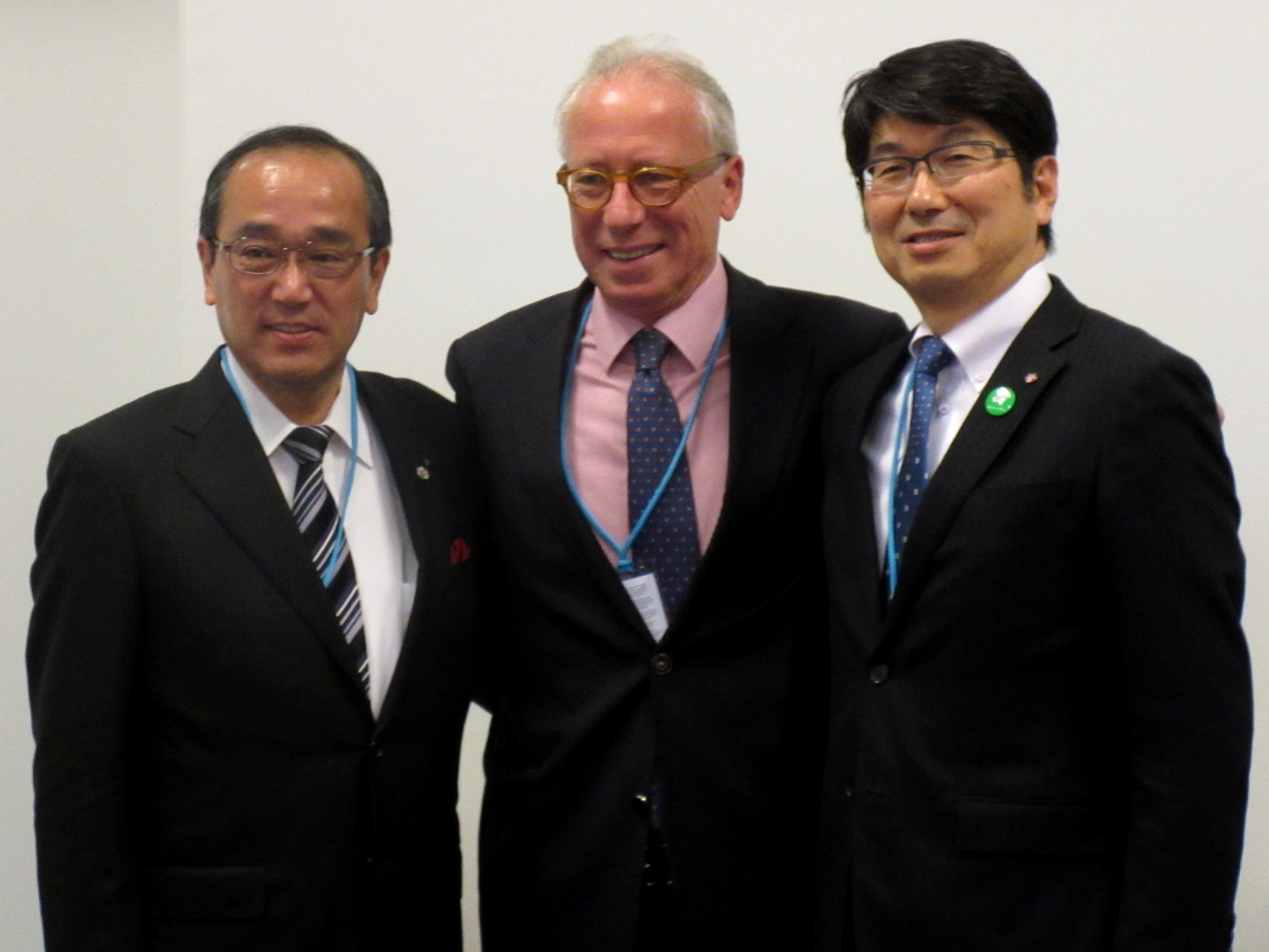 Mayors for Peace Executive Cities’ Meeting for Exchange of Views

Representatives of eight executive cities, mainly from Europe, gathered to exchange their views. They engaged in active discussion on their efforts toward nuclear disarmament and their unique activities in each region. Through the discussion, they reaffirmed the importance to address issues of not only nuclear disarmament but also others such as terrorism, refugees, and various regional issues in order to create a lasting world peace in this tense global state. They determined they would more deeply discuss the issues and member activities in each of their regions and how to more strongly coordinate their actions at the 9th General Conference in August. 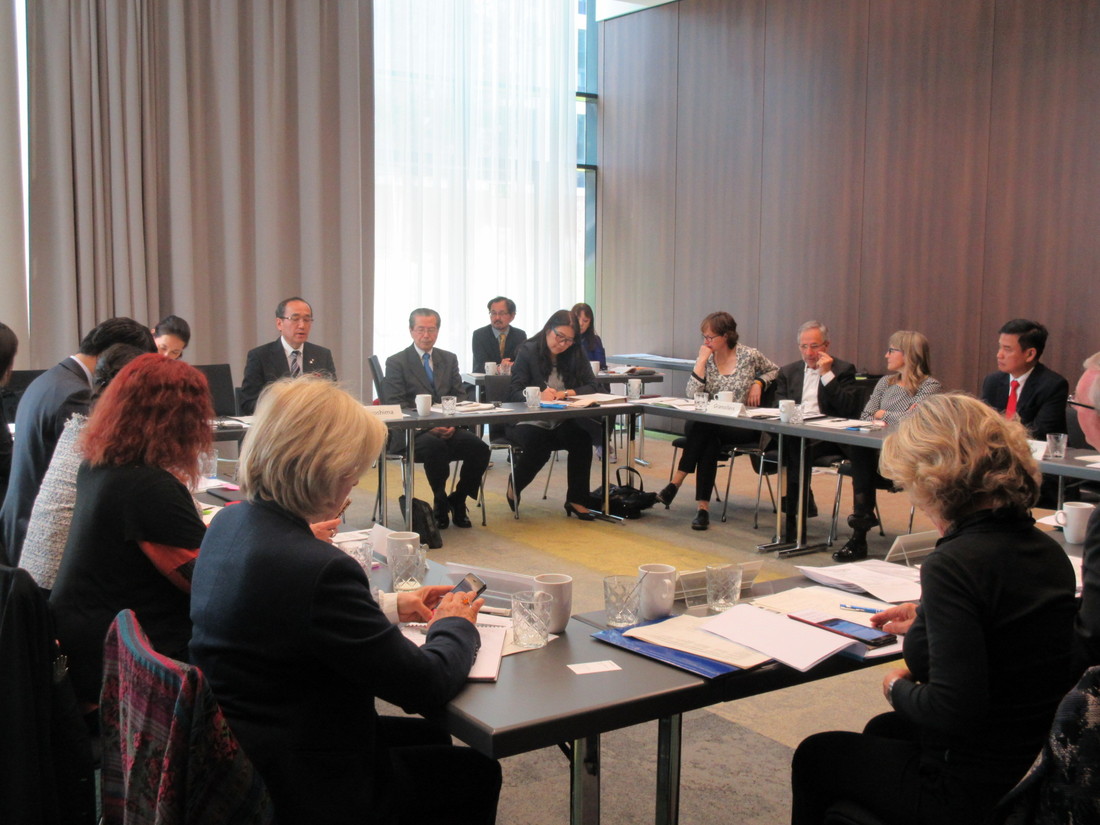 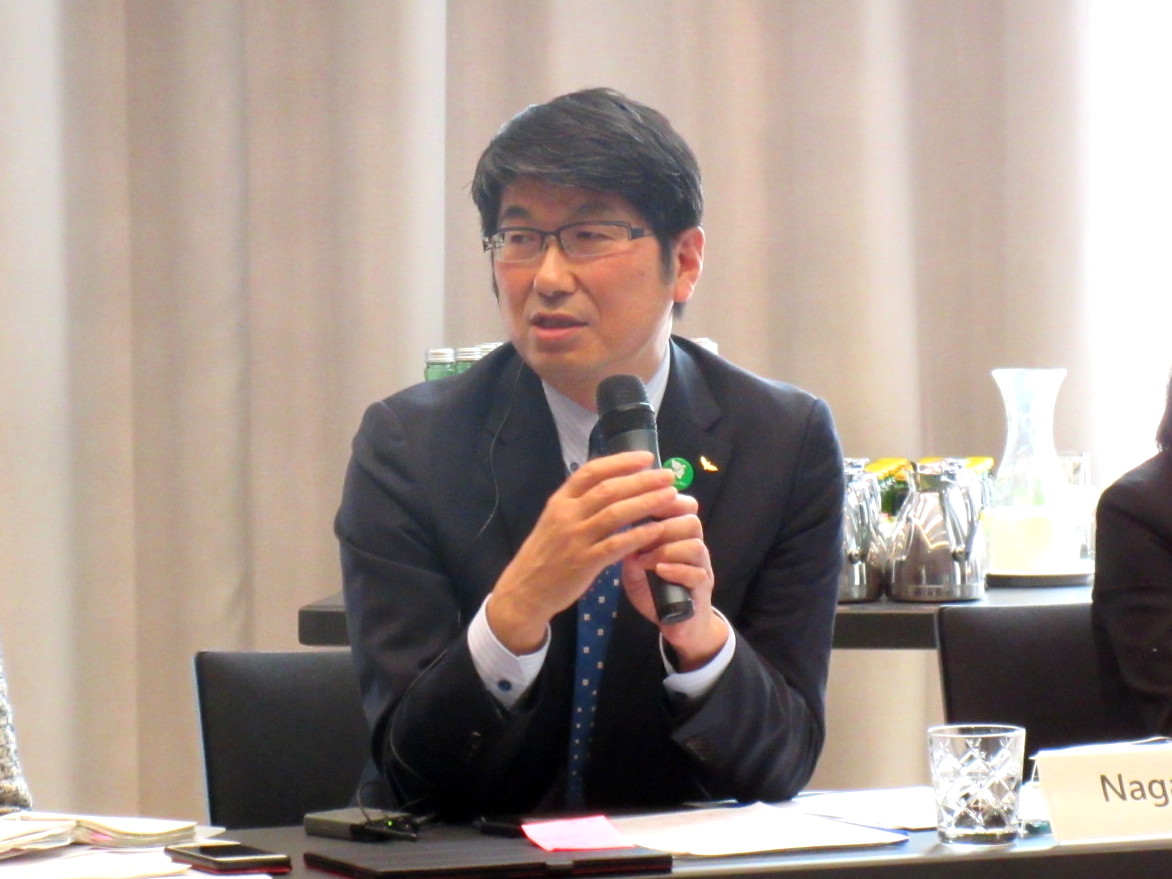 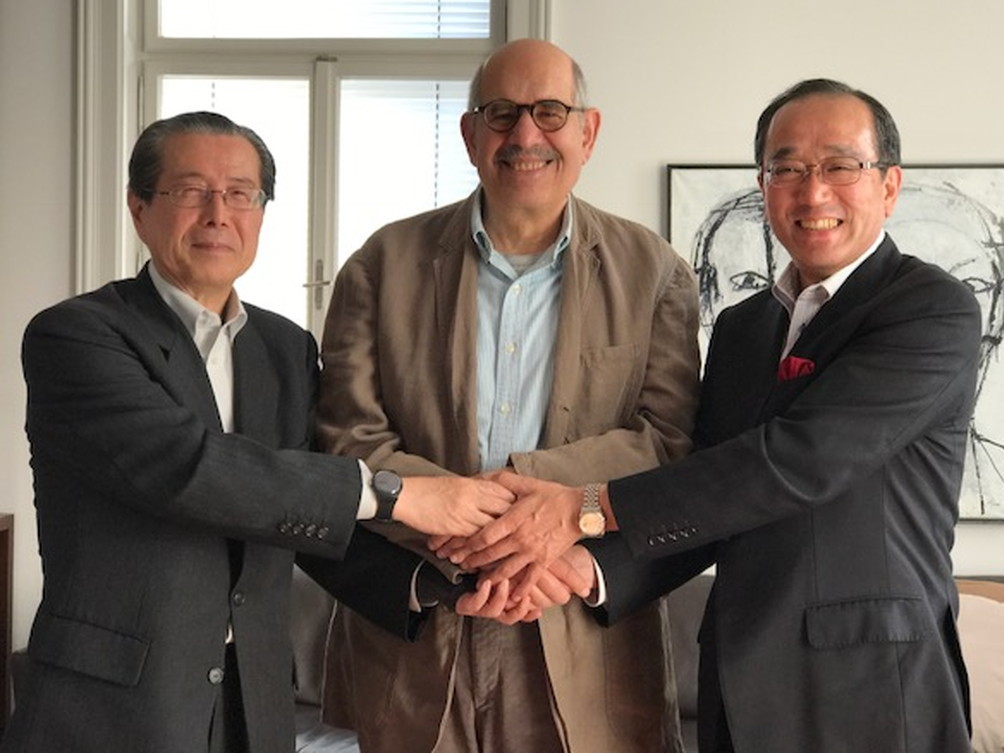 Mayor Matsui and Secretary General Komizo exchanged views on the current situation towards nuclear abolition with Ms. Laura Rockwood, Executive Director of the Vienna Center for Disarmament and Non-Proliferation and Ms. Angela Kane, a senior fellow of VIC.

Mayors for Peace President Kazumi Matsui handed Ms. Izumi Nakamitusu a letter to Mr. António Manuel de Oliveira Guterres, Secretary-General of the United Nations, requesting him for the Keynote speech at the 9th General Conference of Mayors for Peace.
Ms. Nakamitsu said that they would give this matter positive consideration. 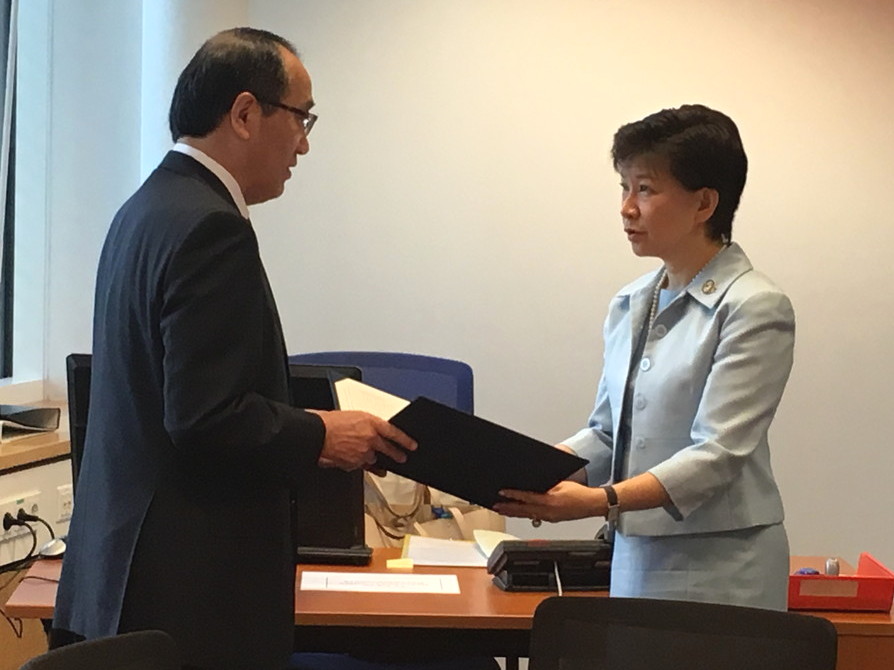 MfP delegations observed a speech by Ms. Izumi Nakamitsu, the UN Under-Secretary-General and High Representative for Disarmament Affairs, Office for Disarmament Affairs. Ms. Nakamitsu delivered a speech in which she said the threat of nuclear weapons is the biggest factor that worsens the world security situation and nuclear and non-nuclear nations should play their roles respectively to take forward nuclear disarmament.

High school students from Hiroshima, members of the Nagasaki Youth Delegation, and youths from member cities of Mayors for Peace such as Volgograd, Russia made presentations on their experiences gained through peace activities and their wishes for peace. Members of the youth delegations from Hiroshima and Nagasaki overcame their language barrier and confidently delivered their presentations. The youths from member cities who visited Hiroshima as part of the program of “HIROSHIMA and PEACE” and “International Youth Conference for Peace in the Future, Hiroshima ” in previous years sent a message by live or recorded video. Meeting with Ambassador Patricia O’Brien, Permanent Representative of Ireland to the UN

Mayor Matsui appealed the importance of mutual understanding through dialogue, not threats, in order in to realize a world free from nuclear weapons. Ambassador Patricia O’Brien expressed strong appreciation that MfP continues meaningful and attractive activities. 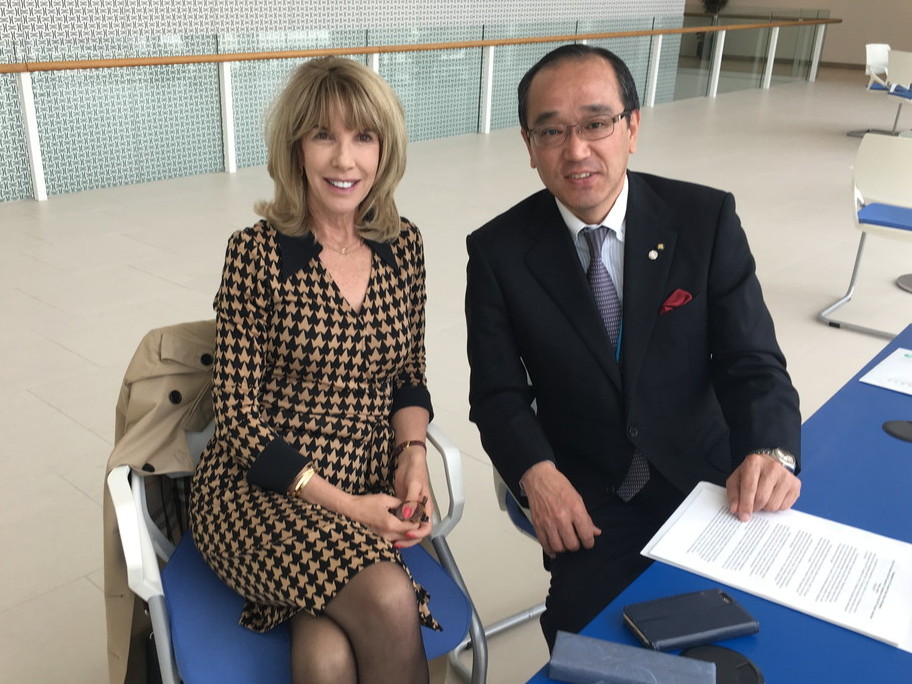 MfP organized a Mayors for Peace Exhibition in Vienna International Center where the A-bomb PrepCom was held. Committee participants deepened their understanding of the realities of the atomic bombings.