Mr. Komizo gave an introduction about the “Hiroshima-Nagasaki Peace Study Course,” and expressed his hope that Volgograd State University will start offering the course in the near future as the first Russian university to do so. Rector Tarakanov mentioned that his university is committed to preserving memories of the past, and conveying them to future generations. Following the meeting, one of the students gave a presentation on the Battle of Stalingrad (now Volgograd), one of the bloodiest battles in history, which cost both the USSR and Germans a vast number of casualties. 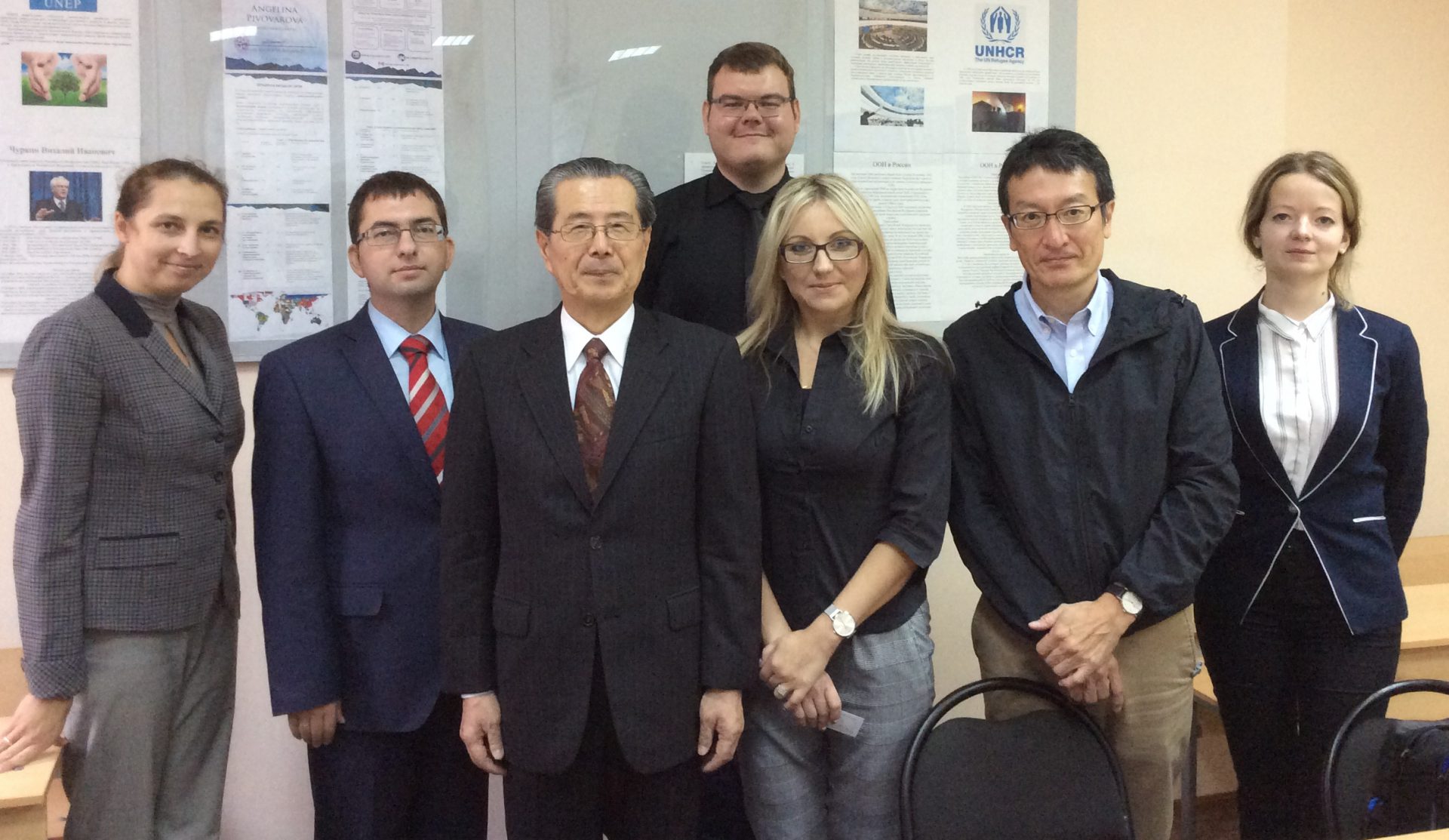 Mr. Komizo visited the Panorama Museum of the Battle of Stalingrad, which features a 360-degree, over 10 meter high drawing of the battlefield, powerfully depicting the cruelty of war. He also visited the ruins of Grudinina mill, which has been preserved as a silent witness of the battle that lasted over seven months. 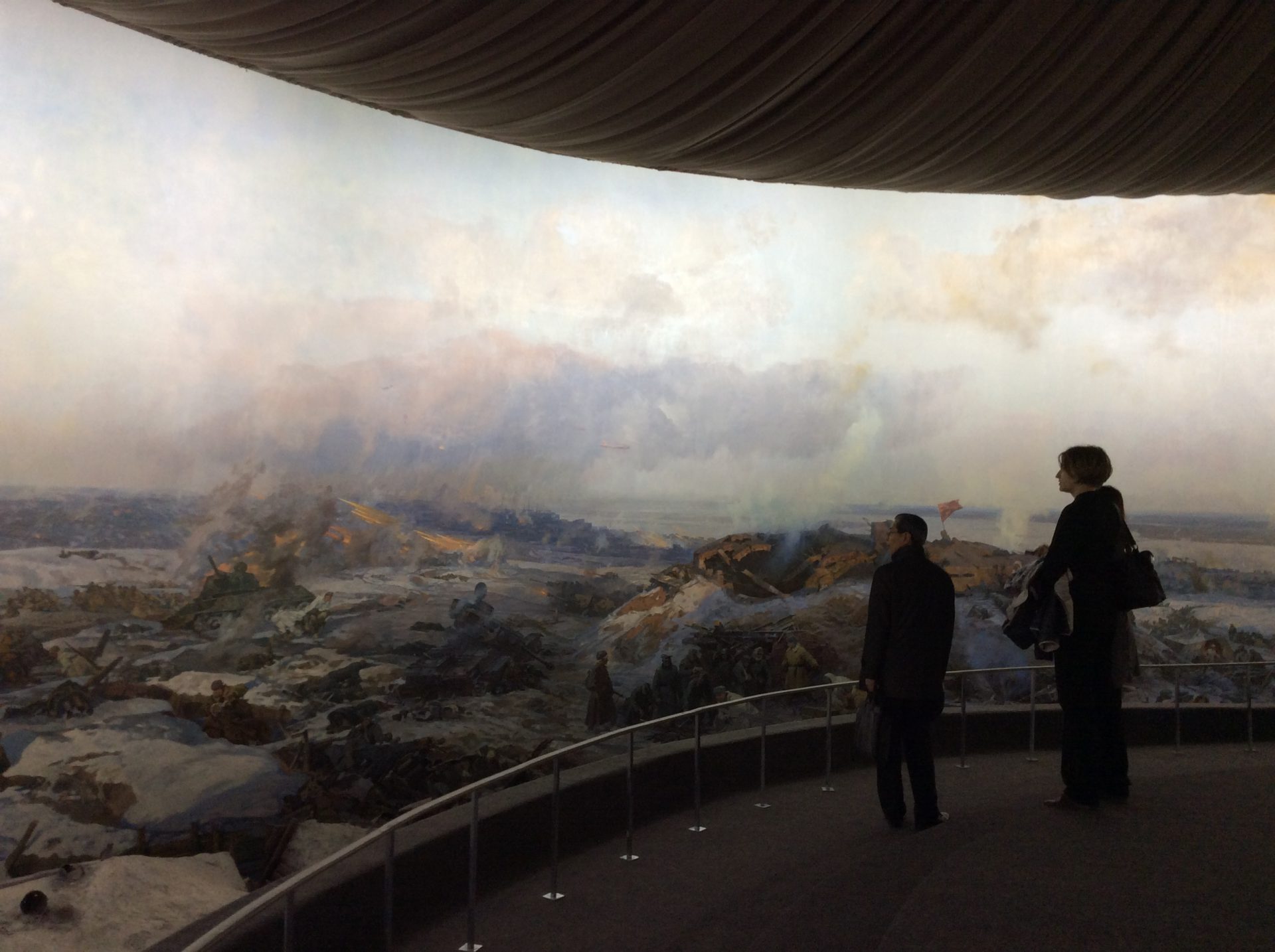 Dinner with Mayor Kosolapov of Volgograd

The Mayor of Volgograd kindly arranged an impromptu dinner for Mr. Komizo. Mayor Kosolapov confirmed his continued commitment to Mayors for Peace activities. Mayor Kosolapov and Mr. Komizo discussed various topics over dinner including the public opinion in Russia over nuclear issues and Volgograd and Hiroshima’s sister city relationship. 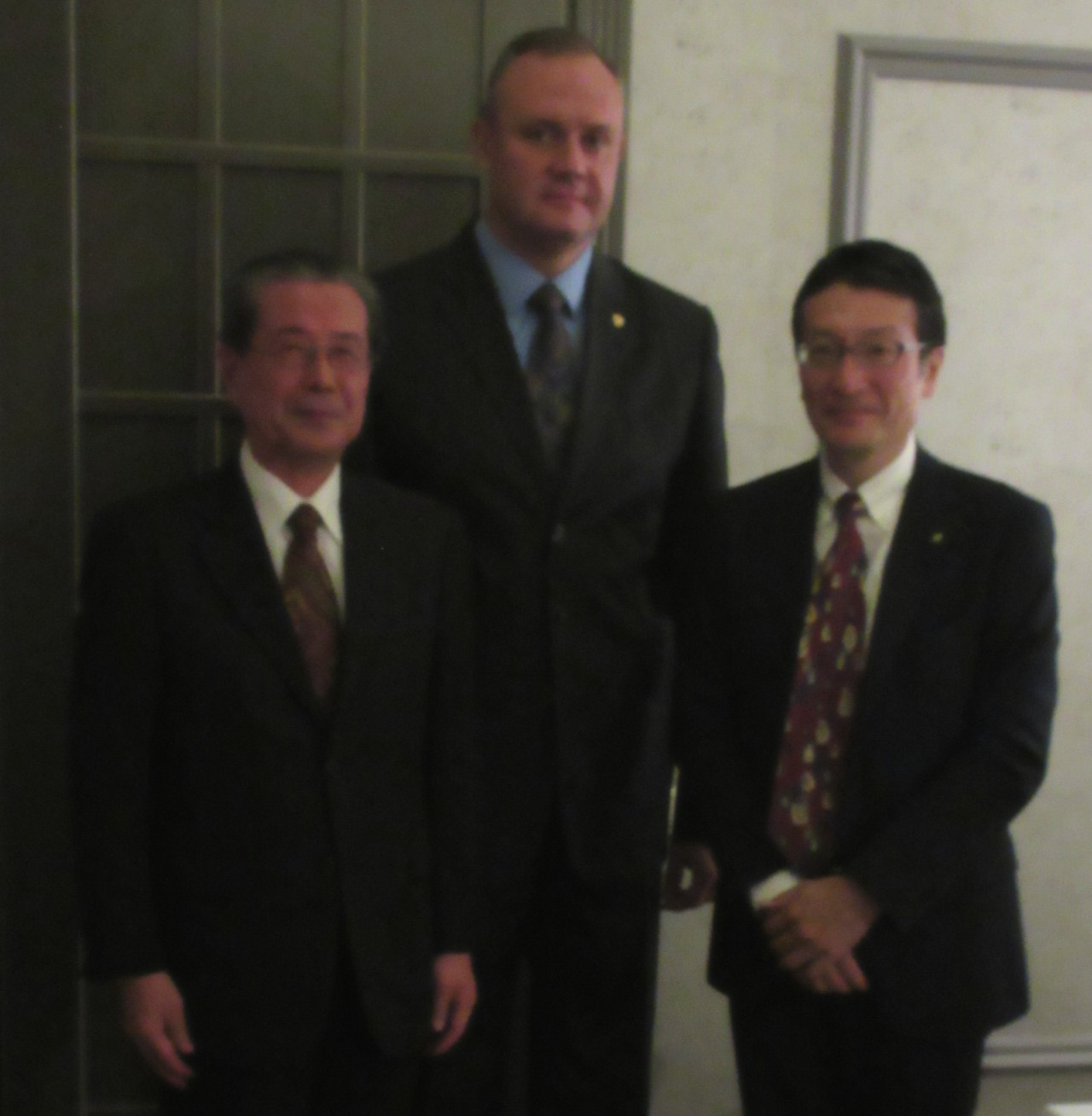 Meeting with Mayor Kosolapov of Volgograd

Mr. Komizo expressed his strong hope to continue working with the City of Volgograd to achieve our common goal of a world without nuclear weapons and handed Mayor Kosolapov the two documents adopted at this year’s Mayors for Peace General Conference, Mayors for Peace Action Plan and the Nagasaki Appeal, as well as this year’s Peace Declaration by the City of Hiroshima. Mr. Komizo also asked for Volgograd’s help in expanding Mayors for Peace membership in Russia. Lastly, Mr. Komizo presented Mayor Kosolapov with a wreath of paper cranes folded by Japanese students. 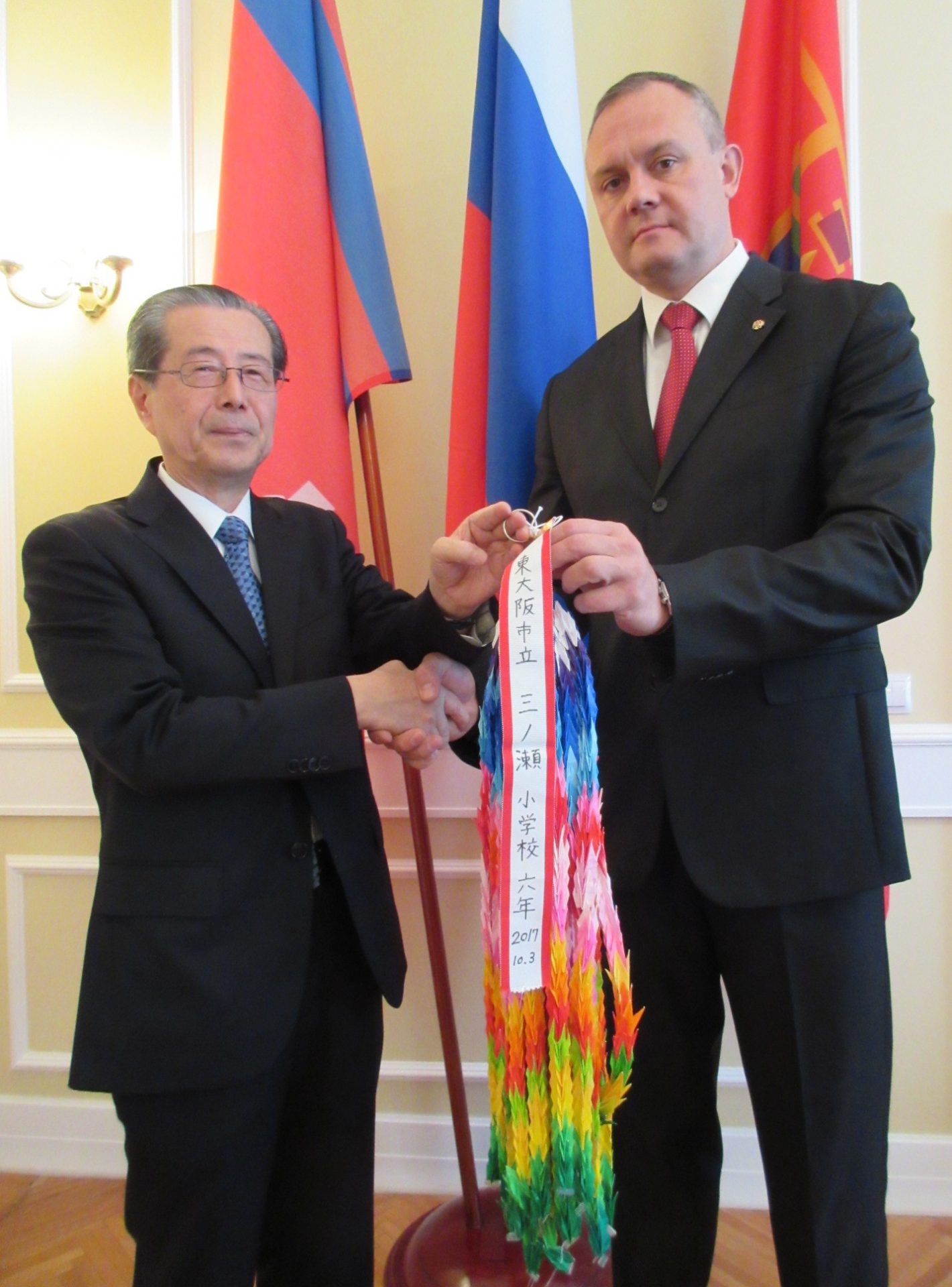 Visit to the Mamayev Hill and other historic sites

Mr. Komizo visited the Mamayev Hill, a memorial complex commemorating the Battle of Stalingrad where the statue “The Motherland Calls” is located. He visited these monuments and also a memorial hall to mourn the victims of the war, which helped him deepen his understanding about the Volgograd’s history during the WWII. 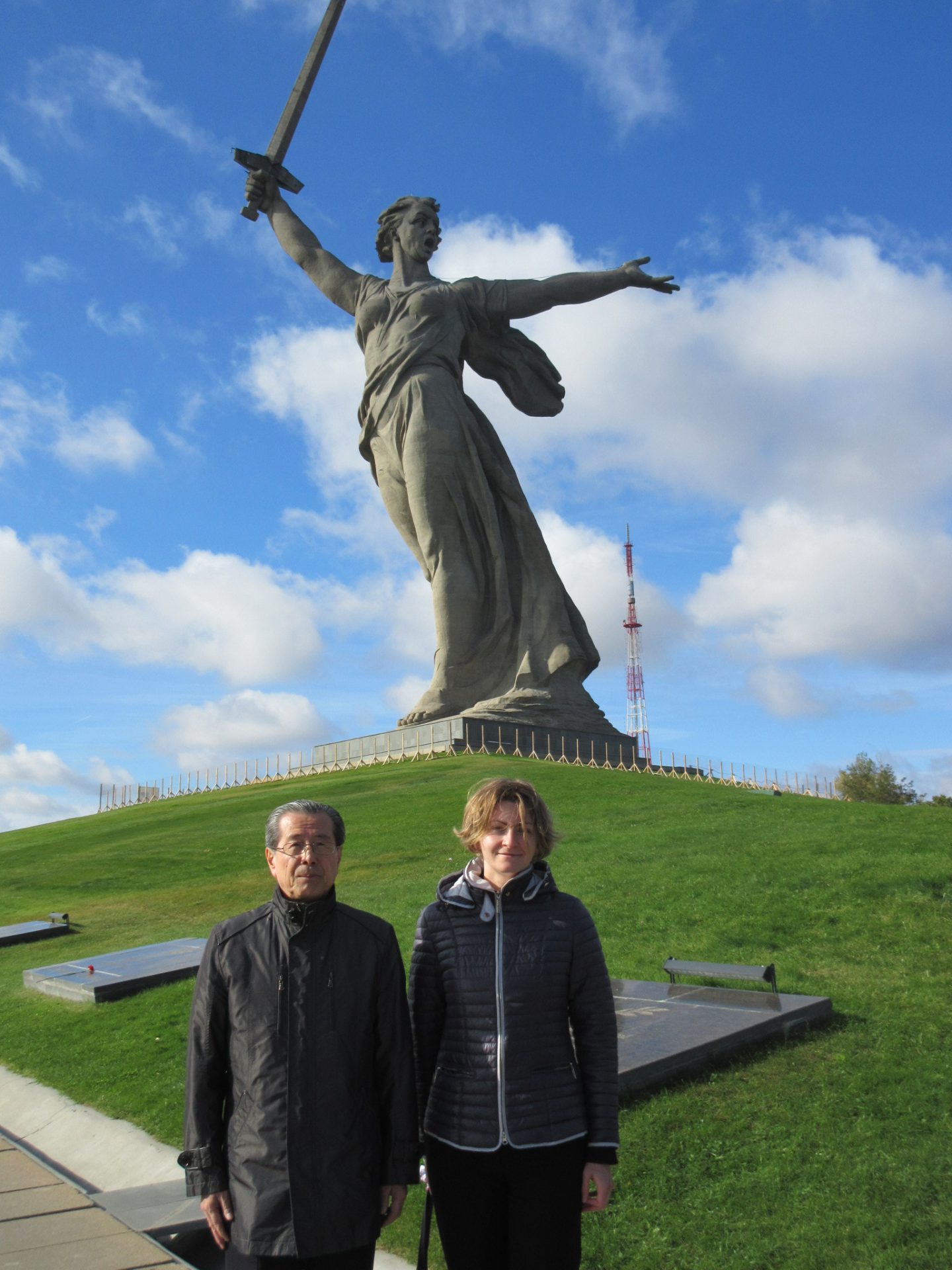 Meeting with Mr. Bernard, Head of the Office of External Affairs, the City of Geneva

Mr. Komizo visited the City Hall of Geneva, a member city of Mayors for Peace to meet with Mr. Steve Bernard, who is in charge of the City’s external affairs. Mr. Bernard commented that Geneva, a city committed to peace, dialogues and negotiations, is truly pleased by the news that the Nobel Peace Prize is being awarded to ICAN, whose headquarters are in Geneva. Mr. Komizo asked the City of Geneva for further support of Mayors for Peace activities. 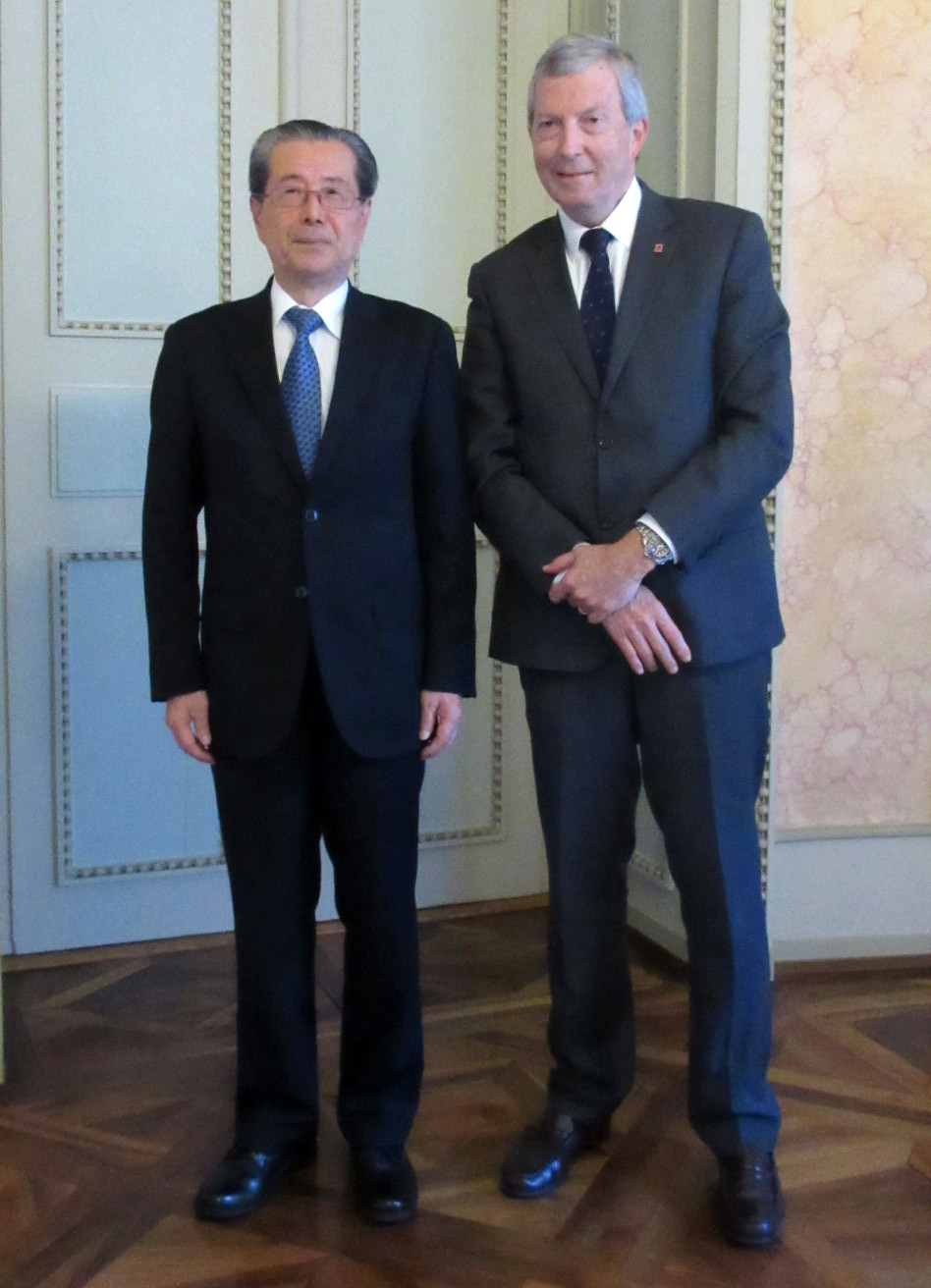 Mr. Komizo visited Dr. Wilfred Wan at the office of UNIDIR, a UN research institute which provides objective research and creative thinking on disarmament and security. Mr. Komizo introduced the work of Mayors for Peace and expressed his hope for future collaboration between UNIDIR and Mayors for Peace. Dr. Wan said that UNIDIR would like to build close relationships with Mayors for Peace through sharing UNIDIR’s research results and providing information on presentation opportunities. 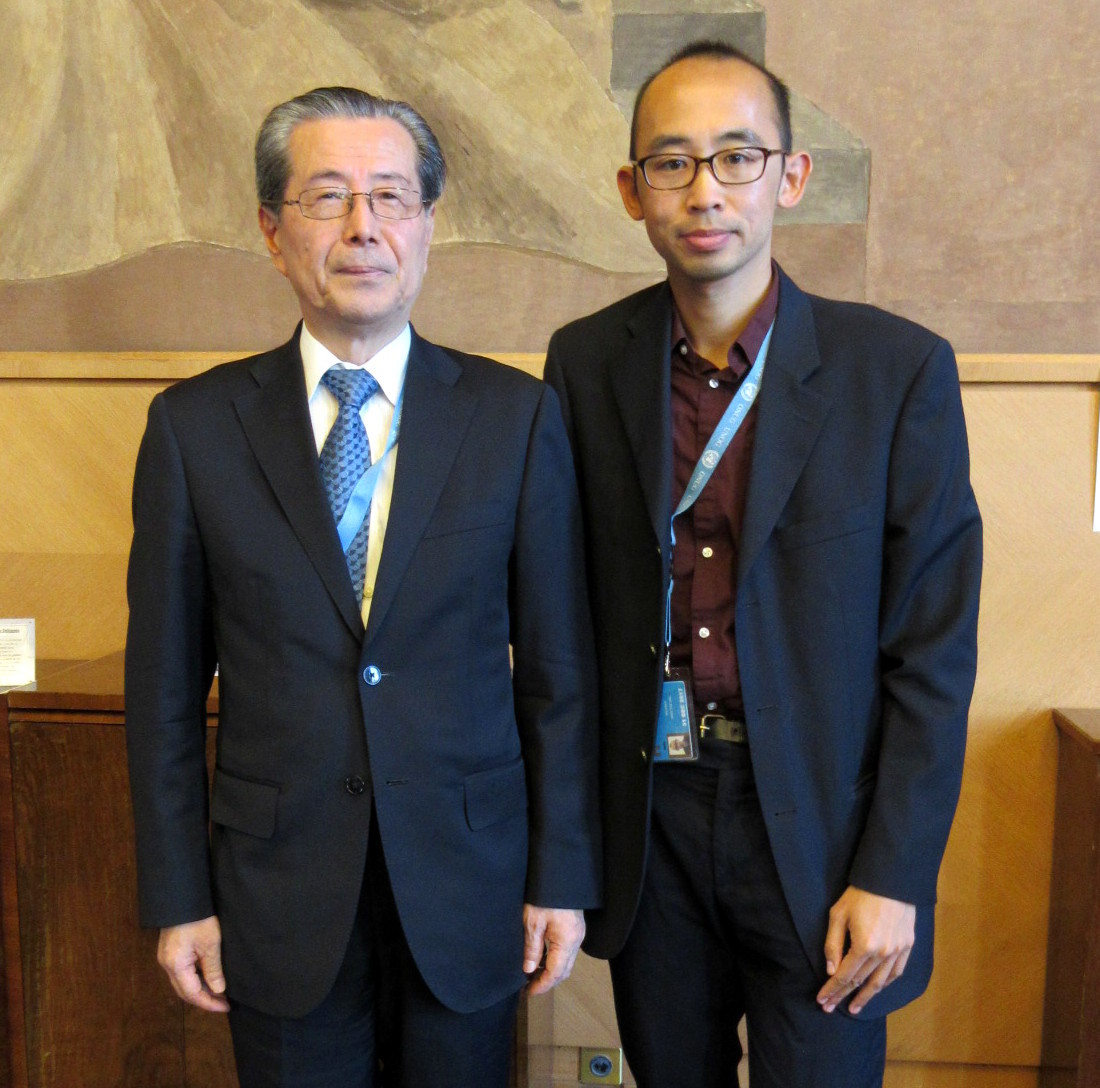 Mr. Komizo visited the headquarters of ICAN, this year’s Nobel Peace Prize winner, to meet with its Executive Director, Ms. Beatrice Fihn. Mr. Komizo discussed which steps must be taken now that the prohibition treaty has been adopted, and stressed the importance of continued efforts to overcome mutual distrust through dialogue. Ms. Fihn mentioned that ICAN is already on its way to developing new plans and will continue to reach out to the general public to convey in an easily understood manner the risks that we currently face, and the civil society initiatives currently being undertaken. Lastly, Mr. Komizo presented Ms. Fihn with a letter of congratulations from Mayor Matsui and a wreath of paper cranes folded by Japanese students. 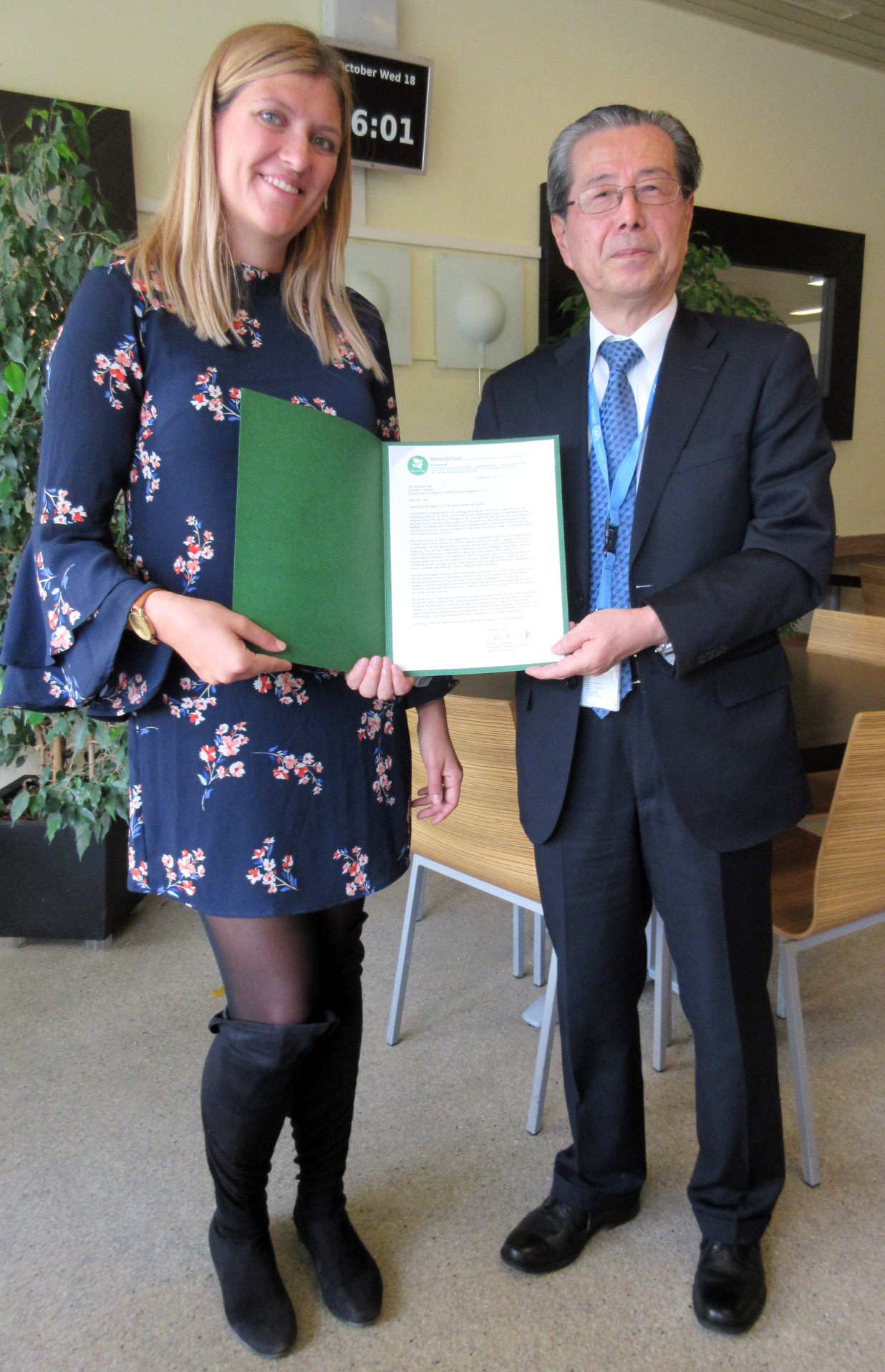 Meeting with Ms. Lawand, Head of Arms Unit of the International Committee of the Red Cross (ICRC)

Ms. Lawand said that the one of the priorities after the adoption of the prohibition treaty is reducing the risk of the use of nuclear weapons through encouraging dialogue with nuclear-armed states and other key actors. Mr. Komizo agreed and mentioned that Mayors for Peace will seize opportunities, such as the meeting of a group of eminent people to be hosted by Japan this year, to facilitate dialogue with nuclear-armed states.

Mr. Komizo briefed Mr. Moller about recent developments in Mayors for Peace, including the decision at this summer’s General Conference to seek solutions to disarmament and security challenges comprehensively, while encouraging Lead Cities in each region to address regional issues such as terrorism, refugees, etc. Mr. Moller commented that despite growing tensions, good news like the adoption of the Treaty on the Prohibition of Nuclear Weapons and ICAN’s receiving of the Nobel Peace Prize can change the course of nuclear disarmament favorably, and the role of Mayors for Peace, which is made up of more than 7,400 member cities, will become increasingly important. 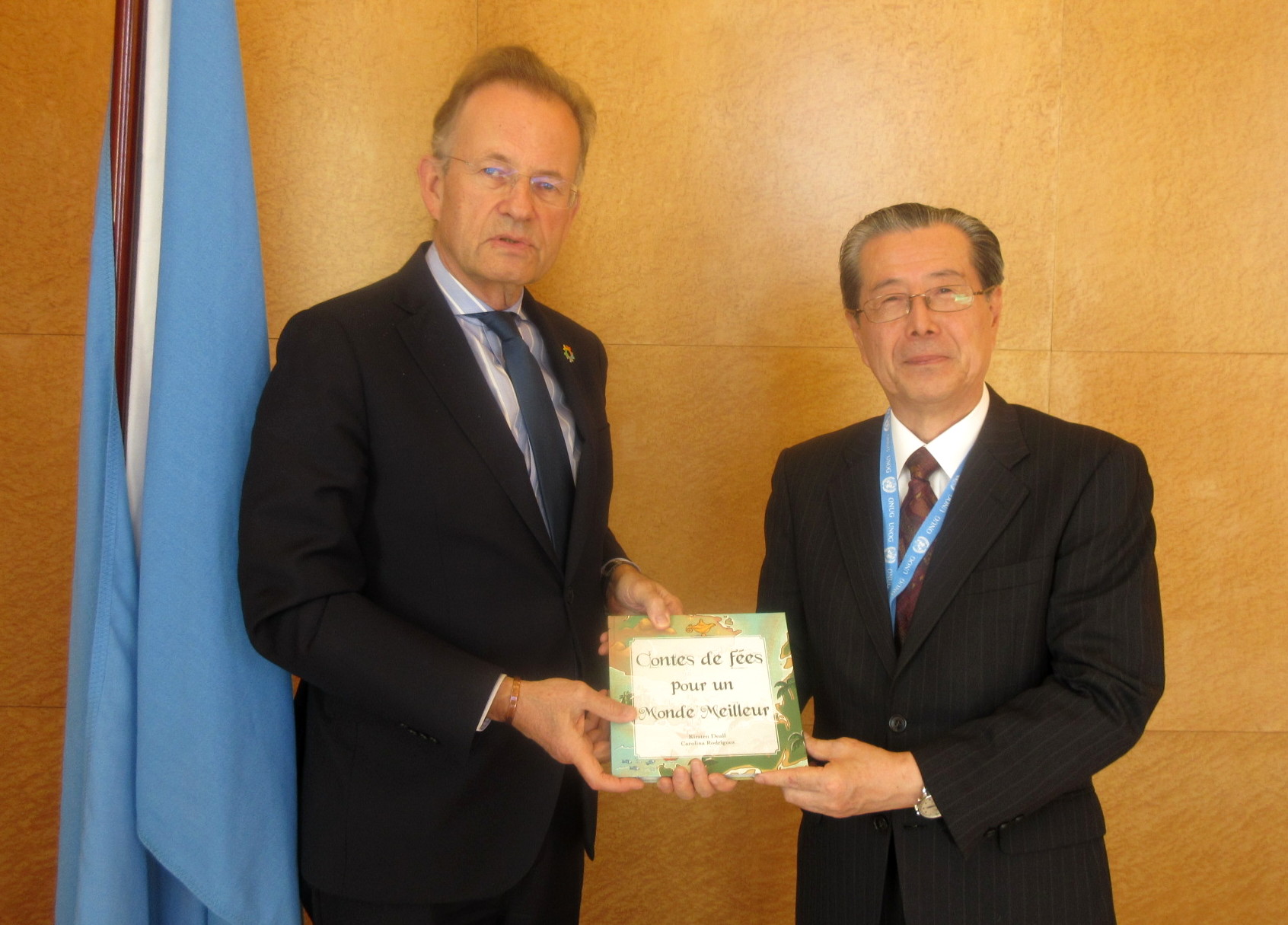 Meeting with Ms. Whyte Gómez, Permanent Representative of Costa Rica to the United Nations Office and other international organizations in Geneva

Ms. Whyte pointed out the lack of knowledge on nuclear weapons among young generations and stressed the need for education. Mr. Komizo said that he would like the aging hibakusha to see the global nuclear disarmament moving forward by the year 2020 and give them a sense of confidence and peace of mind, and expressed the commitment of Mayors for Peace to further promote our efforts to encourage all states to join the Treaty on the Prohibition of Nuclear Weapons. 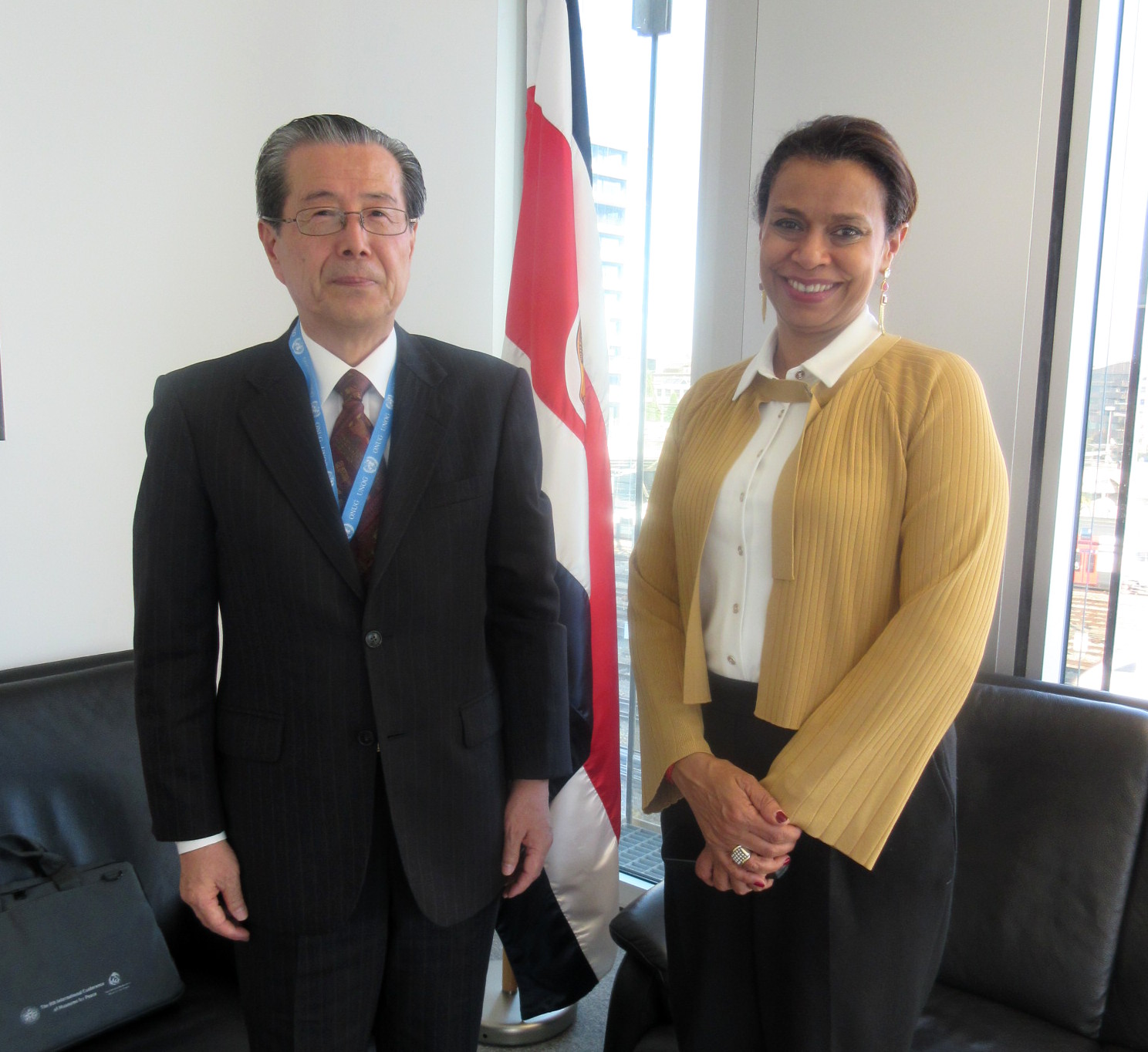 Mr. Komizo introduced Mr. Türk to Mayors for Peace and spoke about our new objective, the “Realization of safe and resilient cities,” under which each regional group seeks to address regional issues such as the refugee crisis. Mr. Türk mentioned the importance of utilizing networks of cities and mayors, like Mayors for Peace does, in addressing the major refugee crisis. 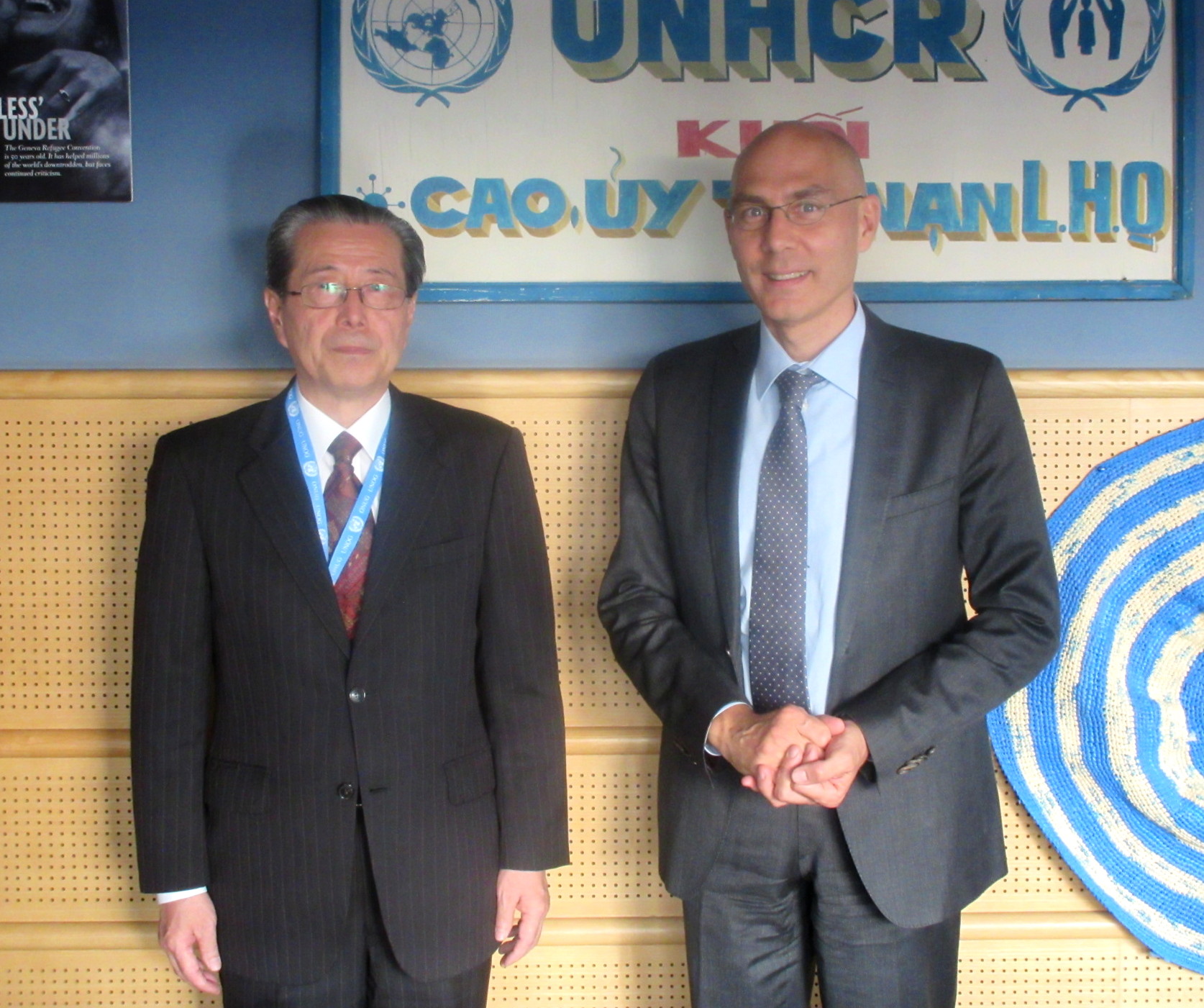