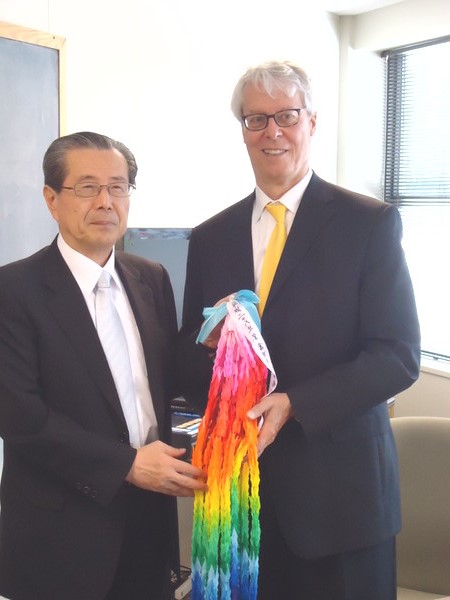 Mr. Komizo had a meeting with representatives and interns of peace/anti-nuclear groups, who are involved in Hiroshima/Nagasaki commemorative events in every August and other peace events in Des Moines area. 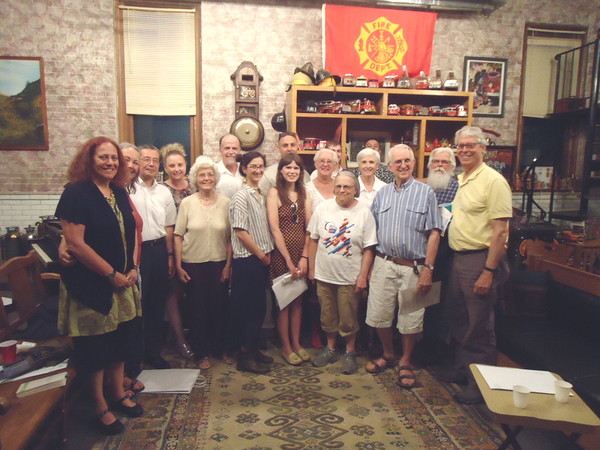 Meeting with Toshiyuki Iwado, Consul-General of Japan in Chicago

Mr. Komizo reported to Mr. Iwado that the Mayor of Des Moines had just agreed to become a U.S. lead city of Mayors for Peace and explained the plans to further strengthen the Mayors for Peace structure in the U.S. for the future.

Mr. Komizo talked to participants of the Conference and attended the opening session, presentation ceremony of Mayors Climate Protection Awards, and other events. 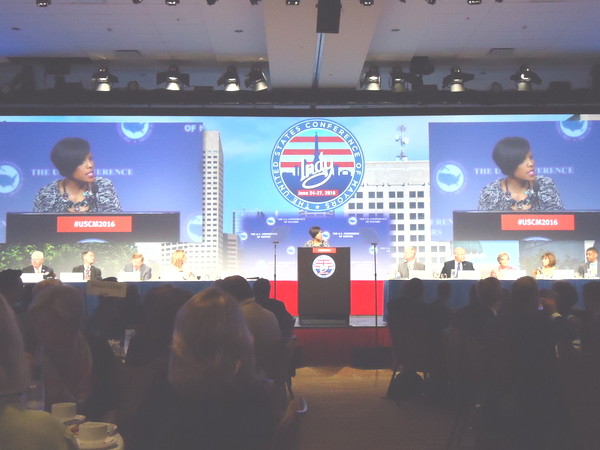 Mr. Komizo handed Mayor Rawlings-Blake a wreath of one thousand paper cranes folded by students of two local schools in Hiroshima. When President Obama visited Hiroshima this May, he handed paper cranes he folded himself, one apiece, to the two children from these schools. 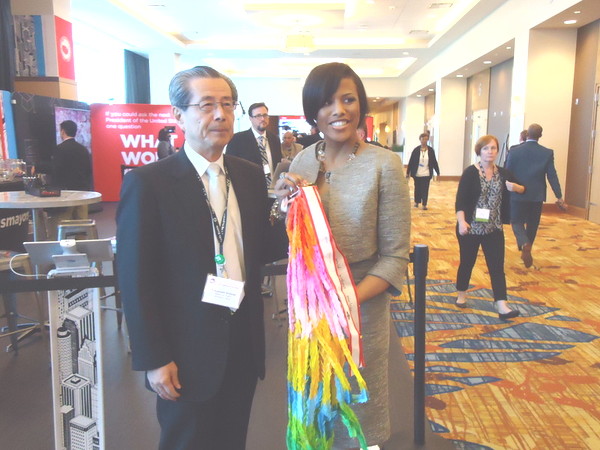 Mr. Komizo met with Mr. Donald L. Plusquellic, former mayor of Akron, Ohio and presented him a letter of appreciation for his longstanding contribution to Mayors for Peace and a commemorative gift. 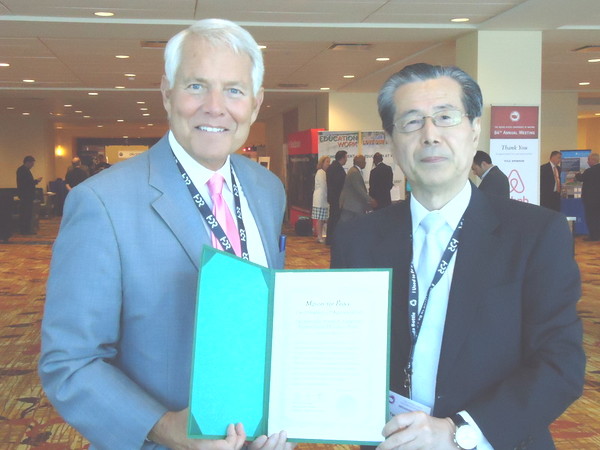 Delivering a Speech at the International Affairs Committee Meeting

Mr. Komizo attended the International Affairs Committee meeting and delivereda speech,in which he appealed that while Mayors for Peace is a non-partisan organization pursuing our common goal of a peaceful world without nuclear weapons, it also honors each member city’s innovative approaches to serve their own needs and aspirations in their own countries and regions. 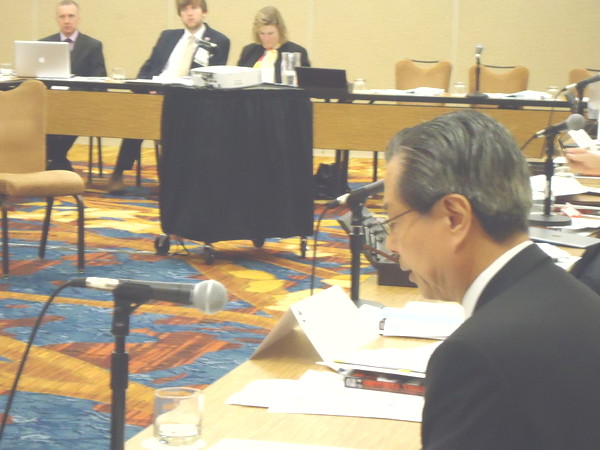 Ms. Suehiro attended the Plenary Session with prominent figures in the panel. 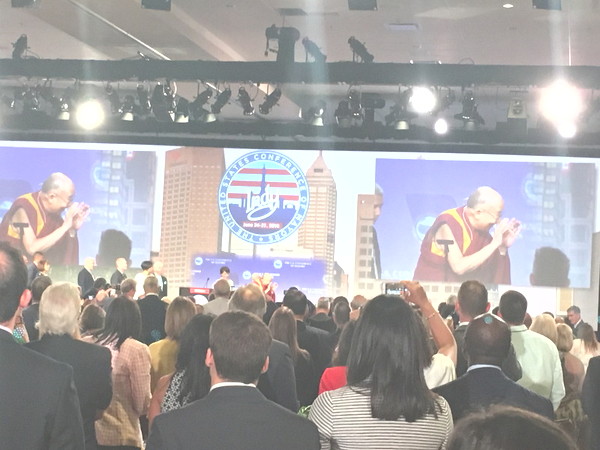 Meeting with representatives of the Stimson Center

Mr. Komizo met with Dr. Barry Blechman, Co-founder of the Stimson Center, and Mr. Brian Finlay, the President and CEO of the institution and gave a briefing about the activities of Mayors for Peace. Dr. Blechman and Mr. Komizo exchanged their views on the elimination of nuclear weapons and agreed on the significance of civil society partners working together to realize the goal. 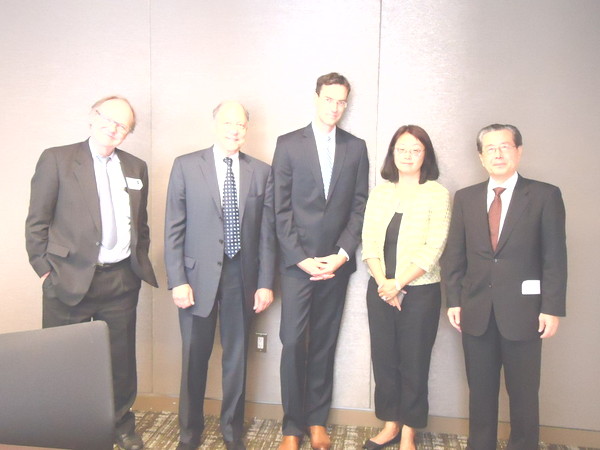 Meeting with Director of Policy for the Ploughshares Fund

Mr. Komizo met with Mr. Tom Z. Collina, Director of Policy for the Ploughshares Fund, and gave a briefing about the development and activities of Mayors for Peace. Mr. Collina expressed his high expectation on the role of Mayors for Peace in nuclear disarmament led by its lead cities. 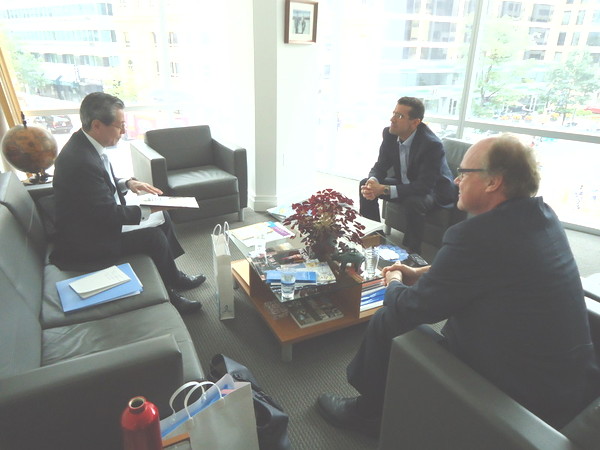 Mr. Komizo explained the purpose and outcome of his visit to the U.S. Mr. Kimball agreed on Mayors for Peace approach to respect U.S. member cities’ autonomy in taking initiatives in their activities in the country. 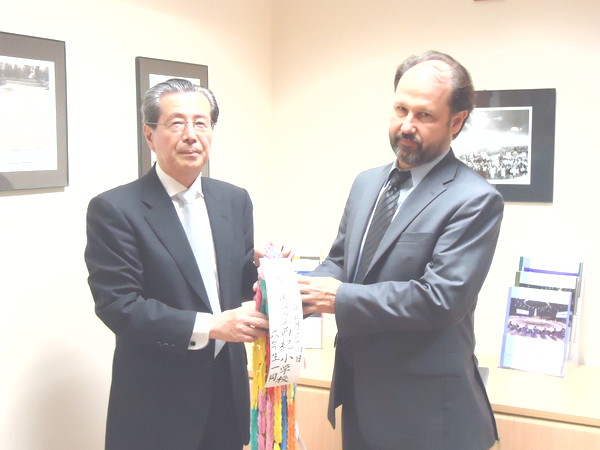 Meeting with U.S. Under Secretary Gottemoeller

Mr. Komizo met with Ms. Rose Gottemoeller, Under Secretary of State for Arms Control and International Security for the U.S. State Department. Mr. Komizo said he came to the U.S. as part of Mayors for Peace efforts to strengthen activities in the U.S., as he believes it is especially important now when the momentum for nuclear disarmament is building with President Obama’s visit to the U.S. and the USCM had just adopted a resolution in support of Mayors for Peace unanimously. 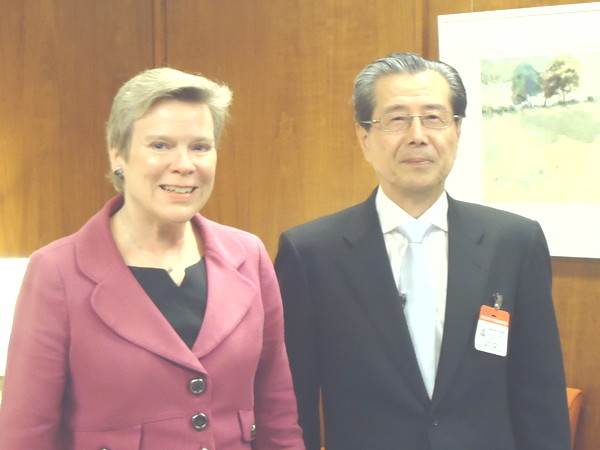 Meeting with Deputy Chief of Mission of the Japanese U.S. Embassy

Mr. Komizo also met with Mr. Atsuyuki Oike, Deputy Chief of Mission of the Japanese U.S. Embassy and exchanged their views on various topics such as public reactions to President Obama’s speech in Hiroshima. Mr. Komizo also gave a briefing about Mayors for Peace activities in the U.S. and asked Mr. Oike for support. 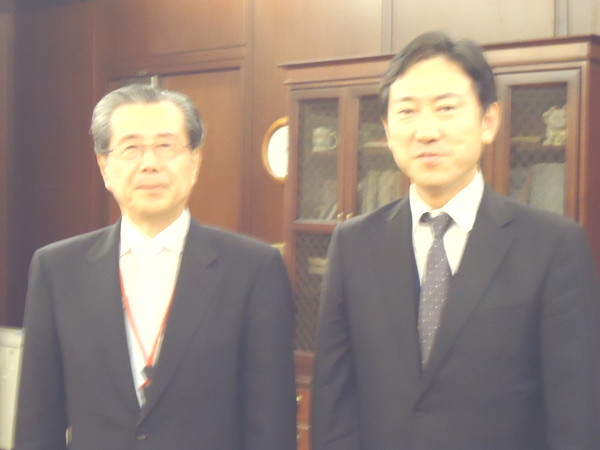