Mr. Kazumi Matsui, Mayor of Hiroshima and President of Mayors for Peace, attended the first three days of the May session of the UN Open-ended Working Group (OEWG) on how to take forward multilateral nuclear disarmament negotiations, which was convened at the Palais des Nations in Geneva, Switzerland. Mayor Matsui appealed to policy makers to demonstrate strong leadership to increase the momentum towards a legal ban on nuclear weapons, as well as urged them to visit Hiroshima and Nagasaki. He also presented the United Nations Office at Geneva with a second-generation A-bombed ginkgo tree and had meetings with representatives of UN officials, of governments and of NGOs during his stay in Geneva. 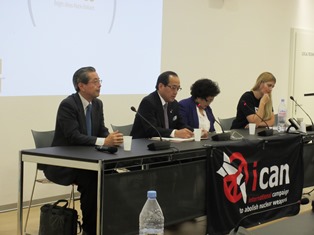 こMayor Matsui met with Ms. Setsuko Thurlow, a hibakusha living in Toronto, and Dr. Kathleen Sullivan, a peace education campaigner who is sharing the stories of hibakusha in the U.S. They are both designated “Hiroshima Peace Ambassadors” by the City of Hiroshima. As both of them attended the ICAN Campaigners Meeting, Mayor Matsui took this opportunity to meet with them and thanked them for disseminating the “spirit of Hiroshima” through their activities. 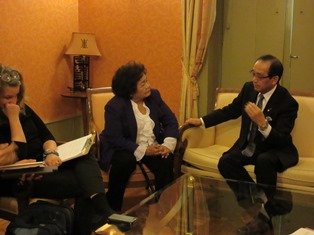 Delivering a Message at the Open-ended Working Group

Mayor Matsui attended the first day of the Open-ended Working Group and gave a statement at the opening on behalf of Mayors for Peace. 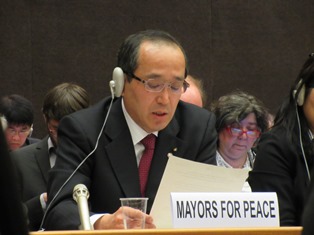 Mayor Matsui presented Mr. Michael Moller, Director-General of the United Nations Office at Geneva, with a second-generation A-bombed ginkgo seedling. This seedling was raised by the City of Lucerne, Switzerland, until the donation ceremony and will be planted on the compound of the Geneva Office by UN Secretary General Ban Ki-moon in the near future.

Information Booth About the Realities of the Atomic Bombings

During this May Session of the Open-ended Working Group, Mayors for Peace set up an information booth in front of the Session’s conference room. At the booth, materials were distributed, the ginkgo seedling that was presented to the United Nations Office at Geneva was exhibited, and a DVD about the atomic bombing of Hiroshima was shown. 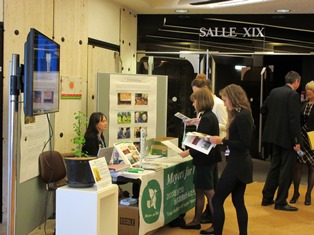 Meetings with Representatives of NGOs

Mayor Matsui met with representatives of Parliamentarians for Nuclear Non-proliferation and Disarmament (PNND) and the International Campaign to Abolish Nuclear Weapons (ICAN). 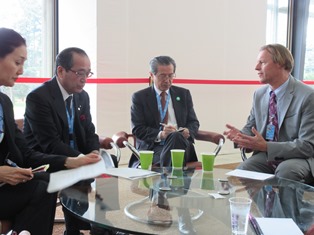 Meeting with Mr. Michael Moller, Director-General of the United Nations Office at Geneva

Mayor Matsui met with Director-General Moller and handed him a letter addressed to UN Secretary General Ban Ki-moon, in which he urged Mr. Ban to work toward the early realization of a nuclear weapons convention. 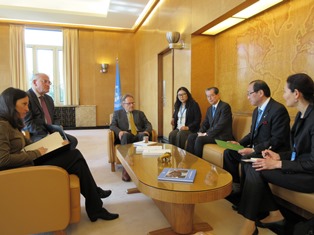 Mayor Matsui expressed his hope that Ambassador Thongphakdi’s chairmanship would be used to skillfully lead the Working Group’s discussions to a final outcome on concrete and practical legal measures related to nuclear weapons. 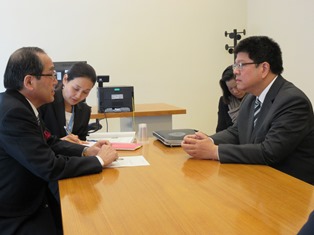