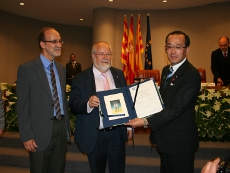 On October 24, 2011, Mayors for Peace was awarded the XXXII Prize for Peace from the United Nations Association of Spain (ANUE). ANUE recognized the work of Mayors for Peace, which now consists of more than 5,000 member cities in 151 countries/regions around the world, for peace, disarmament and especially the elimination of nuclear weapons.

On November 9, Mayor Matsui, Mayor of Granollers, participants of the Executive Conference and mayors of neighboring member cities attended the Awards Ceremony of the“XXXII Prize for Peace”at Diputacio de Barcelona (Barcelona Prefectural Hall) and received the award certificate and the list of extra prize money totaling 18,000 Euro (About 1,900,000 yen).

※The United Nations Association of Spain (ANUE) is an NGO in consultative status with ECOSOC. It was established in 1962 and its headquarters are located in Barcelona.