Mayor Akiba visited Buenos Aires and Mar del Plata, Argentina to attend events related to “Latin American Municipalism Week”, to request understanding and support for Mayors for Peace and the 2020 Vision Campaign and to facilitate recruitment for Mayors for Peace in Latin America. In addition, he met with the chief of cabinet and the minister of foreign relations of Argentina, and called for understanding and support and strengthened ties with local peace NGOs. He also attended the “AFS World Peace Forum” and delivered a speech to arouse international public opinion. The forum was hosted by AFS, a non-profit organization of international education and exchange, which offers an international exchange program for high school students with the goal of realizing a fair and peaceful world.

Mayor Akiba met with Dr. Guillermo Tapia Nicola, Executive Secretary of the Federation of Latin American Cities, Municipalities and Association of Local Governments (FLACMA), and Lic. Juan A. Matteo, Executive Secretary of the Federation of Municipalities Argentina (FAM), and discussed the framework of future collaborations. Both federations expressed full support for Mayors for Peace and a desire to establish cooperative relationships with municipal organizations in Japan in the future. 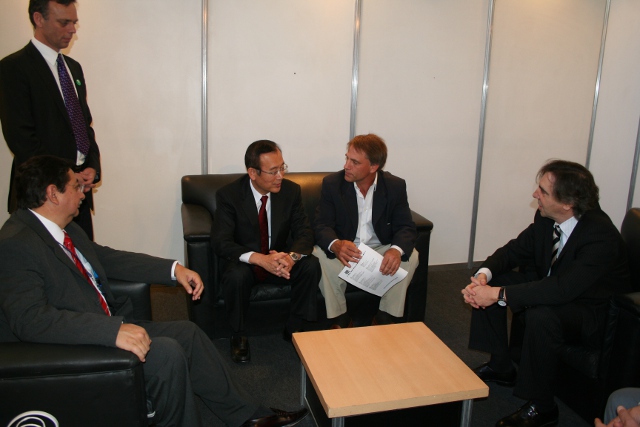 Mayor Akiba attended the opening ceremony of the “Government and Public Services 2010 Exhibition of Latin American Municipalism Week” along with Mr. Julio Miguel de Vido, Minister of Planning and Public Works, and executive secretaries of the local government associations with whom he met the day before. Mayor Akiba gave a keynote speech to an audience of 200, saying that, “We would definitely like Latin American countries, who have concluded the Tlatelolco Treaty, to take a leading role in abolishing nuclear weapons, and it is now that we should realize abolition of nuclear weapons”. His words were received favorably. 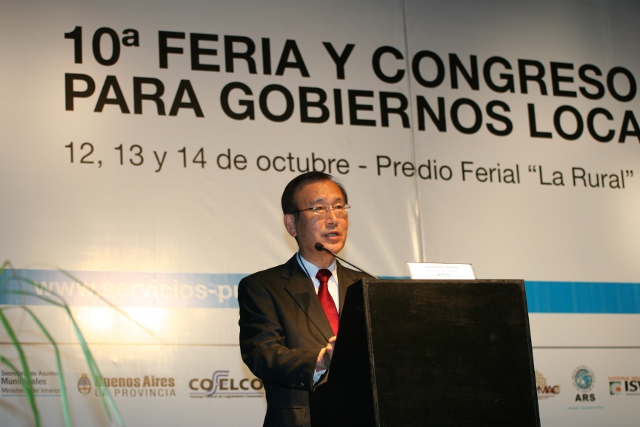 Mayor Akiba visited the presidential palace and met with Mr. Héctor Timerman, Minister of Foreign Relations, and later Dr. Oscar Parrilli, Secretary General of the Presidential Office of Argentina, to ask for their cooperation in expanding Mayors for Peace membership in Argentina and support in abolishing nuclear weapons by 2020. 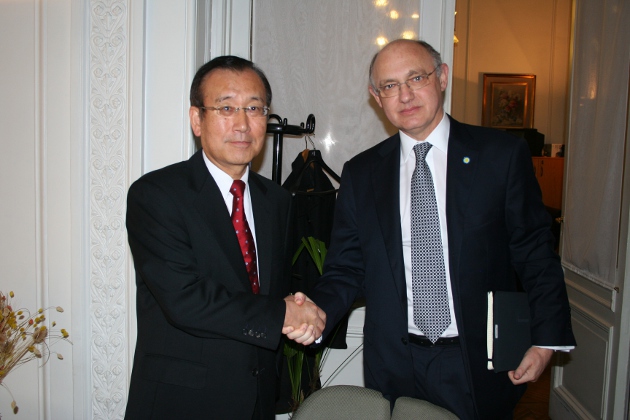 That day, Mayor Akiba also met with Mr. Aníbal Domingo Fernández, Chief of Cabinet, and stressed the importance of the Tlatelolco Treaty, which created a nuclear-weapon-free zone in Latin American countries and was ratified in 1967. In line with that, he called for the leadership of Latin American countries including Argentina in the abolition of nuclear weapons. Cabinet Chief Fernández agreed with Mayor Akiba’s assertion that nuclear weapons need to be abolished for the sake of future generations and that cities must cooperate to resolve global issues. Mayor Akiba also spoke of Hiroshima’s desire to host the 2020 Olympics. 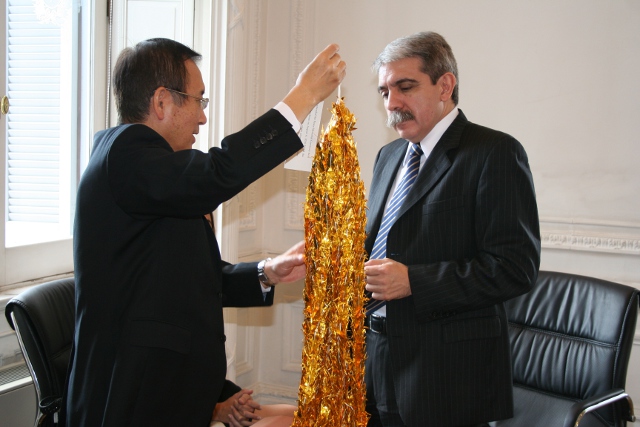 In the evening, Mayors for Peace and FLACMA as well as Mayors for Peace and FAM signed their respective agreements to confirm international cooperation. Mayor Akiba reiterated that efforts must be made to abolish nuclear weapons for the sake of future generations; that time is limited for A-bomb survivors; and that there is a need for a nuclear weapons convention. He further stressed the importance of the Tlatelolco Treaty and the need for Latin American countries to again unify themselves for a common goal. Thirty six mayors from around Latin America submitted their Mayors for Peace registration forms at the venue. Mayor Akiba shook hands with each mayor in appreciation. 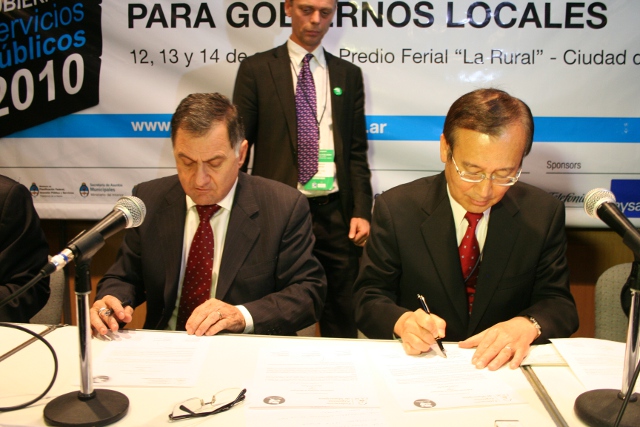 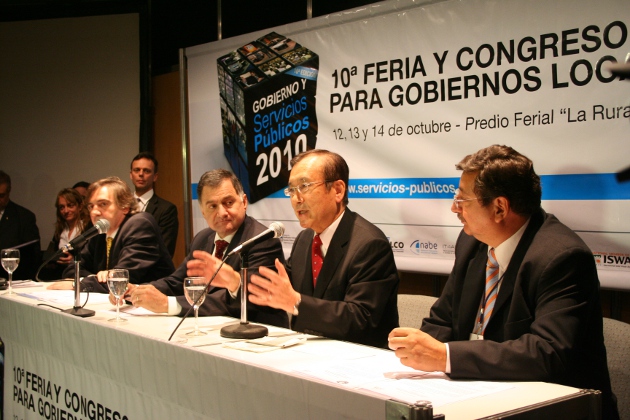 Mayor Akiba met with Mayor Mauricio Macri of Buenos Aires. He acknowledged that Buenos Aires’ historical diversity has given birth to creativity, and that now in the 21st century it was time for cities to contribute to the resolution of global issues. He then called for cooperation with the activities of Mayors for Peace. Mayor Macri responded with his intention to work with Mayors for Peace. 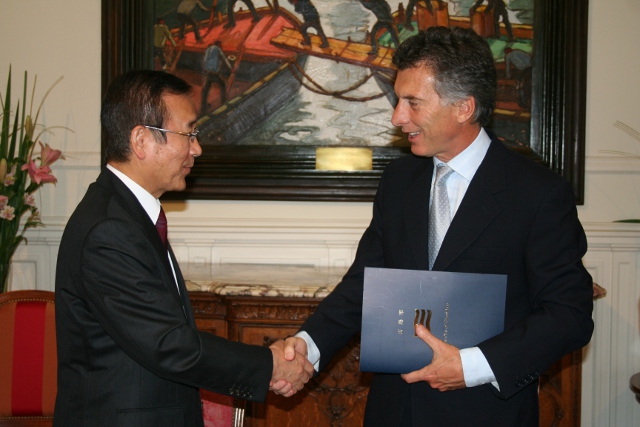 Later, Mayor Akiba visited the Argentine Congress and met with Mr. Pedro Morobiui, Director General of Culture, the Honorable Senate of the Argentine Nation. He called for cooperation with the activities of Mayors for Peace and for a special conference on nuclear disarmament hopefully to be held next year. To make the conference a reality, he asked for cooperation from Argentina. Director General Morobiui voiced his cooperation in considering the matter positively. 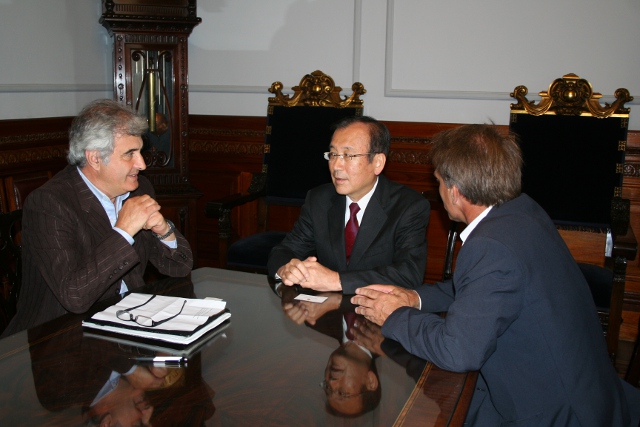 Mayor Akiba also met with Senator Daniele Filmus. Filmus was the former minister for national education and a UNESCO Latin America representative who is very involved in peace activities. He is quoted as saying, “I support Mayor Akiba’s approach. Hiroshima is the symbol of what should never happen again. To spread peace culture, it is important to retain memory of the past, otherwise we will repeat the same mistakes.” 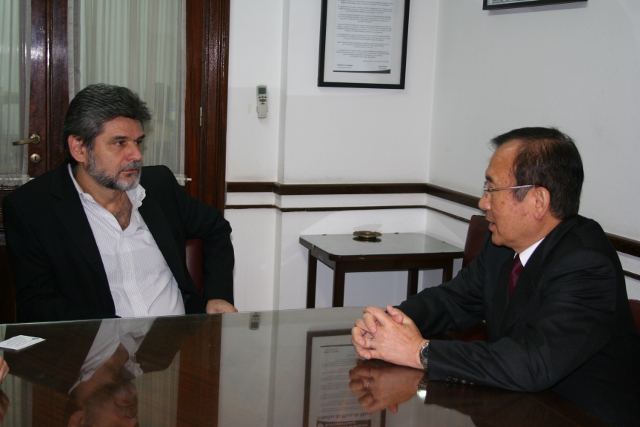 Mayor Akiba visited Escuela Normal Superior en Lenguas Vivas, a school of modern languages in Buenos Aires, and spoke to 40 junior high school and high school students about his own experience studying abroad in high school in America. There he was shocked when he realized how different historical recognitions on the atomic bombings were between the two countries. He told the students that he would like them to try and come to Hiroshima to listen to the hibakusha’s stories. He concluded by asking them to do what they could to help abolish nuclear weapons by 2020. 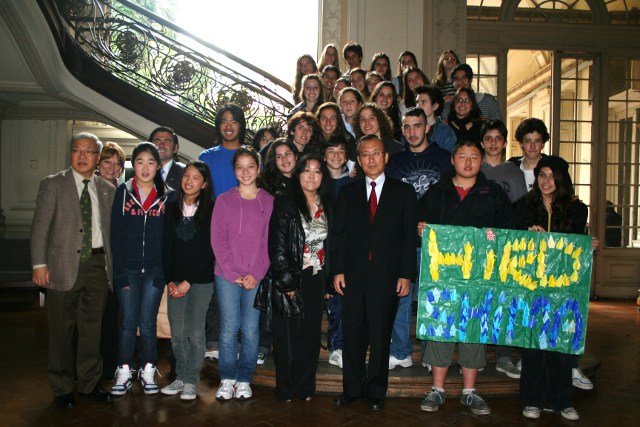 In the afternoon, Mayor Akiba visited the “Sadako and Paper Crane Exhibition” held at a hall in a shopping mall in the city. The exhibition was hosted by the Fundacion Sadako. The foundation was organized by Tomoko Aikawa, who is from Hiroshima and has been living in Argentina for the past 19 years. The poster exhibition and paper crane class attracted the attention of many local citizens, who looked carefully through the posters. Mayor Akiba of Hiroshima was impressed by their efforts in passionately conveying messages from Hiroshima in a country halfway around the world. 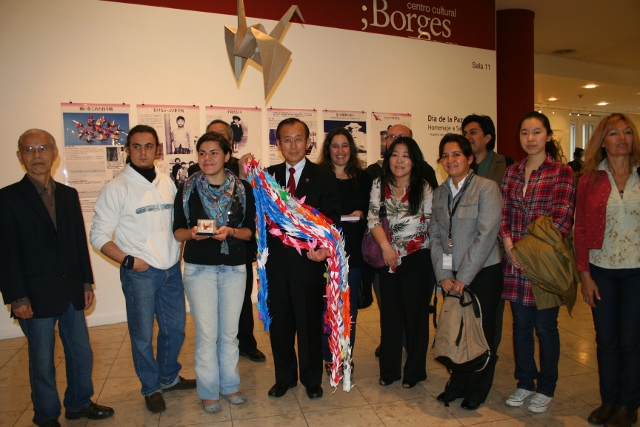 Mayor Akiba once again visited the foreign ministry and met with Foreign Minister Héctor Timerman. He introduced the hibakusha’s message of reconciliation and the necessity of abolishing nuclear weapons while the hibakusha are still alive and requested the leadership of Argentina, which promoted the Treaty of Tlatelolco, in holding a special conference for nuclear disarmament in 2011. Foreign Minister Héctor Timerman said that he would make the effort to work together for the abolition of nuclear weapons. Mayor Akiba left Buenos Aires late at night and arrived at Mar del Plata early the next morning. He held a joint press conference with Mr. Gustavo Pulti, Mayor of Mar del Plata at 9 am. Mayor Pulti talked about the civilian victims of the Falklands Conflict in his city and emphasized the importance of peace before announcing his intent to join Mayors for Peace and handing over the registration form to Mayor Akiba. He touched on his admiration of the Tlatelolco Treaty as Latin American historical achievement and asked for their cooperation to realize a world without nuclear weapons. The audience responded with a round of applause. Including the City of Mar del Plata, that day Mayor Akiba received nine registration forms for Mayors for Peace. 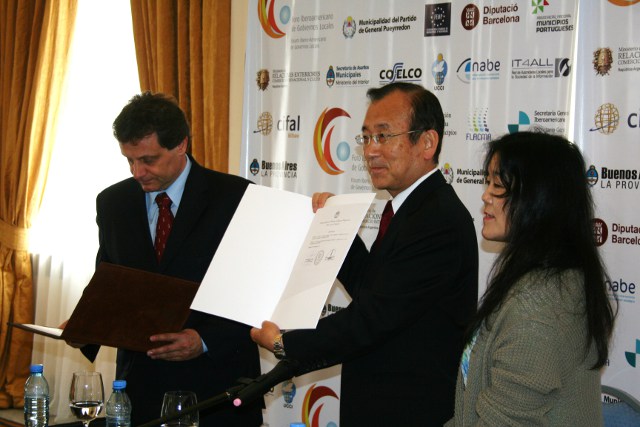 During his speech at the Forum of Latin American Local Governments in the City of Mar del Plata, Mayor Akiba talked about the activities of Mayors for Peace, linking a Japanese rock group’s lyrics to his own message of reaching across borders to cooperate for a common goal. He also stressed the importance of the people’s participation and peace education, and introduced Hiroshima’s hope to host the 2020 Olympics to celebrate a world without nuclear weapons by 2020. His words were accepted favorably.

In the evening, Mayor Akiba returned to Buenos Aires and met with Dr. Luis Hernán Martinez Crespo, Vice Governor of the Province of Santa Cruz, Sr. Alejandro Guillermo Victoria, Member of the Santa Cruz Chamber Legislative and Dr. Carlos Alberto Zannini, Technical and Legal Secretary of the Office of President. The Province of Santa Cruz is the hometown of former President Nestor Kirchner and is also where his wife, President Cristina Kirchner, used to serve as a provincial legislator. Mayor Akiba asked the vice governor to pass on a message to the president about holding a special international conference on nuclear disarmament in Argentina. The vice governor and others promised to convey his message. Mayor Akiba attended the AFS World Peace Forum hosted by AFS, a non-profit organization of international education and exchange. AFS offers an international exchange program for high school students with the goal of realizing a fair and peaceful world. The venue was filled with an audience of about 300, including many young people. Following the host’s speech, Mayor Akiba talked about his own experience of studying in America during high school. He introduced his interpretation of four principles to effect “change” by Professor Cornel West of Princeton University, including “the power to change comes from within us. And it is important that we use that power in historical context”. He also summarized a description of the strengths of cities by Professor Richard Florida of the University of Toronto, saying “an essential characteristic of a city is its diversity. And in order to take advantage of this special feature of a city, what we need is tolerance, tolerance of other people’s views, feelings and value systems” “out of this diversity and tolerance, a city’s creativity is born”. He focused on the roles of cities toward peace and asked for their understanding and cooperation with Mayors for Peace. He touched on his admiration of the 1967 Tlatelolco Treaty and the need for a nuclear weapons convention by 2015 leading to the abolition of nuclear weapons by 2020, like the examples of the biological weapons convention (1972), the chemical weapons convention (1993), the anti-personnel landmine convention (1998) and the cluster munitions convention (2008).

Other attendees were Professor Ole Mjøs, former Chair of the Norwegian Nobel Committee, Rogelio Pfirter, Director General of the Organization for the Prohibition of Chemical Weapons, Ambassador Jorge Arguello, Permanent Representative of Argentina to the UN and Norwegian Ambassador Nils Haugstveit to Argentina.