Mayor Akiba attended the Peace Education Conference, which was held at the University of Copenhagen, and gave a lecture titled “Peace Education in Japan”. Citing words of American philosopher George Santayana, “Those who cannot remember the past are condemned to repeat it”, he introduced photos from immediately after the atomic bombing and illustrations drawn by A-bomb survivors to let the audience learn more of the past. He then spoke of Sadako Sasaki and Dr. Randall Forsberg, who is called “the mother of the anti-nuclear weapons movement”, to stress the importance of peace education and to realize nuclear-weapon abolition. He later met with the Mayor of Copenhagen and delivered a lecture at a school of advanced education to appeal for nuclear-weapon abolition. 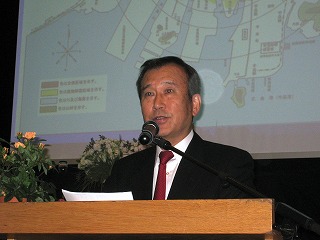 Mayor Akiba gave a lecture at Copenhagen’s Open Gymnasium, a school of advanced education, using photos and pictures to show the realities of the atomic bombings, and stated emphatically that nuclear weapons are inhumane and should be abolished from this world. 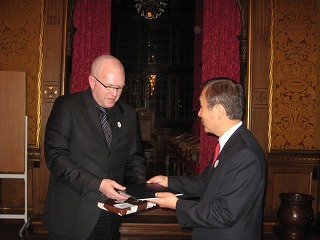 Mayor Akiba met with Copenhagen’s Mayor for the Technical and Environmental area, and called for collaboration in constructing a peaceful world without nuclear weapons through city diplomacy. 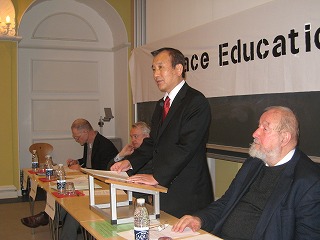 Mayor Akiba gave a lecture at the Peace Education Conference, conveying the reality of the atomic bombings, and also stressed the importance of peace education for nuclear-weapon abolition.