On the occasion of 10th anniversary of the ICJ advisory opinion stating “… the threat or use of nuclear weapons would generally be contrary to the rules of international law”, we participated in commemorative meetings held by European peace NGOs in The Hague (The Netherlands) and Brussels (Belgium) in July 2006. Our delegation consisted of mayors and representatives from 15 cities in 11 countries. 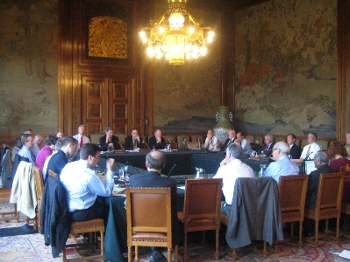 On July 5, 2006, to mark the 10th anniversary of the advisory opinion issued by the International Court of Justice in July 1996, a commemorative meeting sponsored by Mayors for Peace was held in the Japan Room of the Peace Palace in which the ICJ chambers are located. Dr. Kate Dewes, a founder of the World Court Project, and Judge Christopher Weeramantry, former vice president of ICJ, were invited as guest speakers. The meeting of about 40 participants was attended by the Mayors for Peace Mayoral Delegation, IALANA (International Association of Lawyers Against Nuclear Arms), IPPNW (International Physicians for the Prevention of Nuclear War), and many other NGO representatives. Dr. Dewes presented a keynote address on the theme, History of the UN General Assembly Request for an Advisory Opinion. She described the historical process that led to the advisory opinion, including the discussions that were taking place at the time in the General Assembly. Judge Weeramantry, in a speech entitled, The Legal Obligations and Constraints Identified by the Court, spoke about the importance and limits of the advisory opinion as a factor in international law. He pointed to the need for citizen action to demand that the nuclear-weapon states take action toward nuclear disarmament. Next, Mayor Akiba, as representative of Mayors for Peace, announced Phase II of the 2020 Vision Campaign, introducing the Good Faith Challenge. Each member of the Mayoral Delegation then offered comments, followed by a lively discussion involving the NGO representatives and all present.

Good Faith Challenge
* This campaign takes the term “good faith” from Article VI of the NPT and from the ICJ advisory opinion of July 1996.

[City members of the Mayoral Delegation]

We participated in the peace gathering in Aldermaston, where there is only Nuclear Establishment Site, made speeches and handed a letter to the factory director calling for the cessation of the manufacture of nuclear weapons.

We met Lord Mayor Ken Livingston of London, and made a joint signature by Mayor of Hiroshima and Lord Mayor of London reaffirming the establishment of cooperation toward the abolition of nuclear weapons. 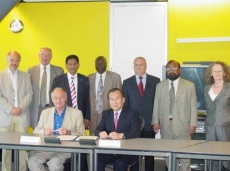 Meeting with the Director General for Defence and Intelligence of UK Foreign Ministry, our mayoral delegation called for the abolition of nuclear weapons and the de-targeting of cities. 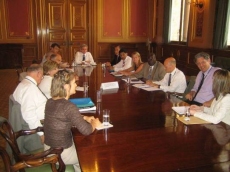 We made a speech at a public opinion exchange organized by peace related NGOs in the UK Parliament. 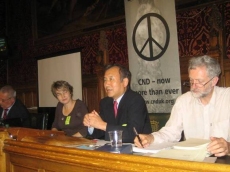 Meeting with the Ambassador at Large of Netherlands’ Foreign Ministry, and we asked for the support for our Emergency Campaign to Ban Nuclear Weapons by 2020 and handed over the Letter of Request for the Prime Minister. 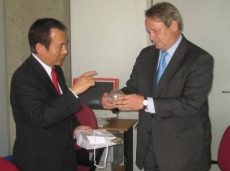 We organized a conference in the Peace Palace in The Hague where the International Court of Justice (ICJ) is located to celebrate the 10th Anniversary of the ICJ Advisory Opinion, and launched the “Good Faith Challenge” 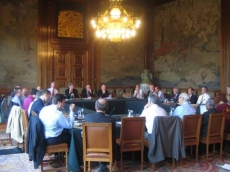 We visited the exhibition of the “International Law Campaign” that was set up by NGO in front of the International Court of Justice. 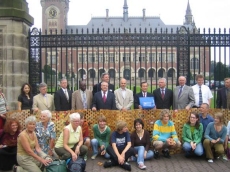 We participated in a Peace Conference with peace related NGOs organized by the city of The Hague and President Akiba delivered a speech.

Meeting with the Minister of Foreign Affairs of Belgium and asked for their actions towards the abolition of nuclear weapons.

We visited the “International Law Campaign” exhibited in the city of Brussels. 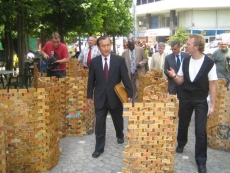 Together with our mayoral delegation we visited the NATO (North Atlantic Treaty Organization) Headquarters, and exchanged opinions on the deployment and elimination of as well as the total abolition of nuclear weapons. 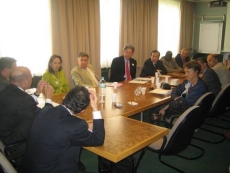 We participated in the conference to celebrate the 10th Anniversary of the ICJ Advisory Opinion in the European Parliament. 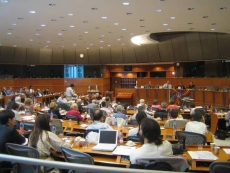 We visited the city of Ieper where the International Secretariat of Mayors for Peace was established, participated in the opening ceremony and unveiled the commemorative monument for Mayors for Peace.