A mayoral delegation organized by Mayors for Peace, which consisted of 167 representatives (51 of them mayors) from 80 cities and municipalities in 16 countries, participated in the Review Conference on the Nuclear Non-Proliferation Treaty (NPT) which was held from May 2 to 27, 2005, at the UN headquarters in New York. 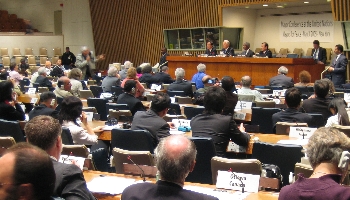 At a special luncheon session arranged for NGO representatives on May 4th at the UN General Assembly Hall, Mayor Itoh of Nagasaki city pointed out the indiscriminate and inhumane nature of nuclear weapons, showing a photo of a charred body of a boy. He said, “I invite you to look at this photograph illustrating the reality of the atomic bombing. What sin was committed by this boy, whose charred corpse we see here?” He rebuked the attitude of the nuclear weapon states that are not willing to fulfill their promise of an “unequivocal undertakings to accomplish the total elimination of their nuclear arsenals.” Underlining the significance of enlarging nuclear weapon free zones and expansion of peace activities among younger generations, he demanded the abolition of all nuclear weapons and establishment of a lasting world peace to ensure that Nagasaki would forever be the world’s last A-bombed city.

Mayor Akiba of Hiroshima, speaking for the A-bomb survivors, showed a replica of a deformed black fingernail of an A-bomb survivor, “This nail is an eloquent symbol of the cruel, endless and mysterious suffering the hibakusha, the survivors of the atomic bombings, have struggled with for 60 years. It embodies their message that no one else should ever suffer as they did”. He affirmed that Mayors for Peace would continue its campaign through active non-violent means designed to apply legal, political and economical pressure on any and all governments and political parties that continue to cling to nuclear weapons. Pointing to the broad support for our Mayors for Peace 2020 Vision Campaign received from around the world, including the US Conference of Mayors, the US National Conference of Black Mayors, and the European Parliament, Mayor Akiba demanded that the Review Conference call immediately for all nuclear weapons to be taken off of launch-on-warning status and to eliminate all nuclear weapons by 2020.

We participated in the Peace March that called for the abolition of nuclear weapons and opposition of wars. About 40000 people from all over the world flooded downtown New York. 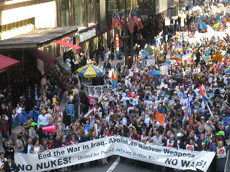 The mayors of Hiroshima and Nagasaki representing Mayors for Peace gave speeches at the Peace Meeting in Central Park. 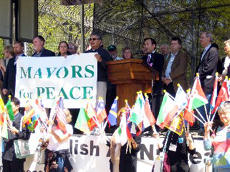 At the opening of the NPT Review Conference, UN Secretary General H.E. Mr. Kofi Annan, in his opening address, stressed that “the only guarantee that nuclear weapons will never be used is for our world to be free of such weapons.” He made clear the mandate of the Review Conference.

A Mayors Conference was held at the Japan Society near UN Headquarters. In the morning session, distinguished guests including H.E. Mr. Nobuyasu Abe, the UN Under-Secretary-General for Disarmament Affairs, and H.E. Ambassador Chowdhury of Bangladesh delivered speeches. A luncheon session followed in Conference Room 4 of UN Headquarters. There, H.E. Secretary General Annan spoke as our distinguished guest, expressing his high hopes for Mayors for Peace and his belief in the possibility of realizing the abolition of nuclear weapons through the initiatives of civil society and especially the Mayors for Peace.
On this occasion, Mayor Akiba personally handed the Secretary General a Request for Leadership and Positive Action toward the Total Elimination of Nuclear Weapons. 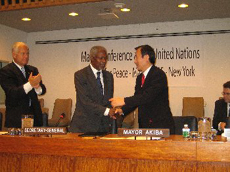 In addition to the Secretary General, speakers included the mayors of Nagasaki, Volgograd and Milan. In the afternoon, the Mayoral Delegation gathered again at the Japan Society and discussed the future agenda of Mayors for Peace.

Speech at the Review Conference on the Non-Proliferation Treaty

At a special session set up for NGO representatives at the UN General Assembly Hall, President Akiba and others delivered speeches and strongly called for the realization of the abolition of nuclear weapons by the year 2020. 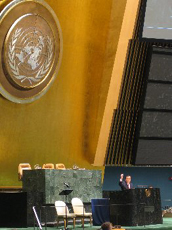 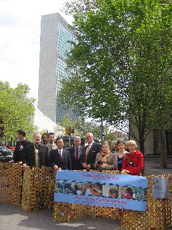 Participating at the Opening Ceremony of the A-bomb Exhibition

We attended the opening ceremony of the A-bomb exhibition in the lobby of the UN on the occasion of the NPT Review Conference. The exhibition was organized by the Nihon Hidankyo – Japan Confederation of A- and H-Bomb Sufferers Organization. 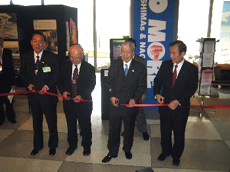 Members of the Mayoral Delegation that gathered in New York from all over the world to attend the NPT Review Conference and to appeal for the abolition of nuclear weapons. 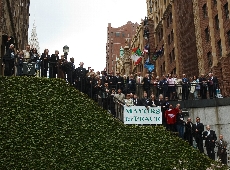