Mayors for Peace wholeheartedly welcomes the momentous occasion of the number of states ratifying the Treaty on the Prohibition of Nuclear Weapons (TPNW) reaching fifty, ensuring its entry into force in ninety days. We would like to rejoice at this moment from the bottom of our hearts with our member cities, their citizens, our partner peace NGOs, and most importantly, with the hibakusha, who long more than anyone else for a world without nuclear weapons. They have each gone through the indescribably painful experience of the humanitarian devastation caused by the atomic bombings, yet continue their efforts based on their unshakable conviction that “no one else should suffer as we have.” We especially must never forget the historical fact that their voices have pushed international society forward and led to the conclusion of the treaty.

With the hope of realizing a world free of nuclear weapons while the hibakusha are still alive, in 2003, Mayors for Peace developed the “2020 Vision.” We have since then been working for the abolition of nuclear weapons and the implementation of legal measures to prohibit them.

At the First Session of the UN Negotiations on the TPNW in 2017, we made substantial proposals to achieve effective legal prohibition of nuclear weapons. After the treaty was adopted, we sent the United Nations and national governments a “Special Resolution Requesting the Early Bringing into Effect of the Treaty Prohibiting Nuclear Weapons,” and delivered speeches at sessions of the Preparatory Committee for the NPT Review Conference. Through these and other acts we extensively sought greater understanding of the reality of the atomic bombings and of the hibakusha’s desire for peace. In addition, we strongly appealed for the conclusion of this treaty, which is in line with the obligations imposed on all NPT States Parties to negotiate in good faith for nuclear disarmament. In our member cities all around the globe, we have stimulated citizens to be engaged in peace activities, such as carrying out petition drives calling for all states to join the treaty as soon as possible. We believe that these activities and concrete contributions have been successful in fostering and growing international public support for abolishing nuclear weapons and have led to the adoption of the TPNW, and now, its fiftieth ratification.

However, even while there are still many nuclear weapons existing on this planet, nuclear disarmament is now stagnant. It is also a fact that the TPNW’s entry into force does not bring us the immediate total elimination of nuclear weapons. Nuclear-armed states and their allies under the nuclear umbrella continue to be opposed to the treaty. Our forthcoming challenges are to make the treaty a comprehensive and fully effective legally binding instrument, including verification and other strong confidence-building measures. To this end we urge the nuclear-armed states and their allies to participate in discussions for effective implementation and development of the treaty, and to attend the meetings of States Parties as observers. From now on, initiatives promoting wider participation in the treaty must be implemented to gain its universal adherence and accelerate the abolition of nuclear weapons.

Mayors for Peace will therefore work for further expansion of our network, currently composed of nearly 8,000 member cities in 164 countries and regions. With this solidarity, we are determined to continue strengthening our efforts to widely convey to members of the public throughout the world that nuclear weapons are an absolute evil that must not exist, and also that this treaty establishes an unambiguous international norm for the abolition of nuclear weapons. We shall cultivate peace consciousness in civil society by promoting “a culture of peace”, in which each citizen thinks about and acts for peace in their daily lives. These actions will create real momentum for peace and will, in turn, help create an environment in which policymakers can take decisive leadership for policy changes to realize a world without nuclear weapons. Let us keep moving steadily toward our goal.

Mayors for Peace Activities for the TPNW 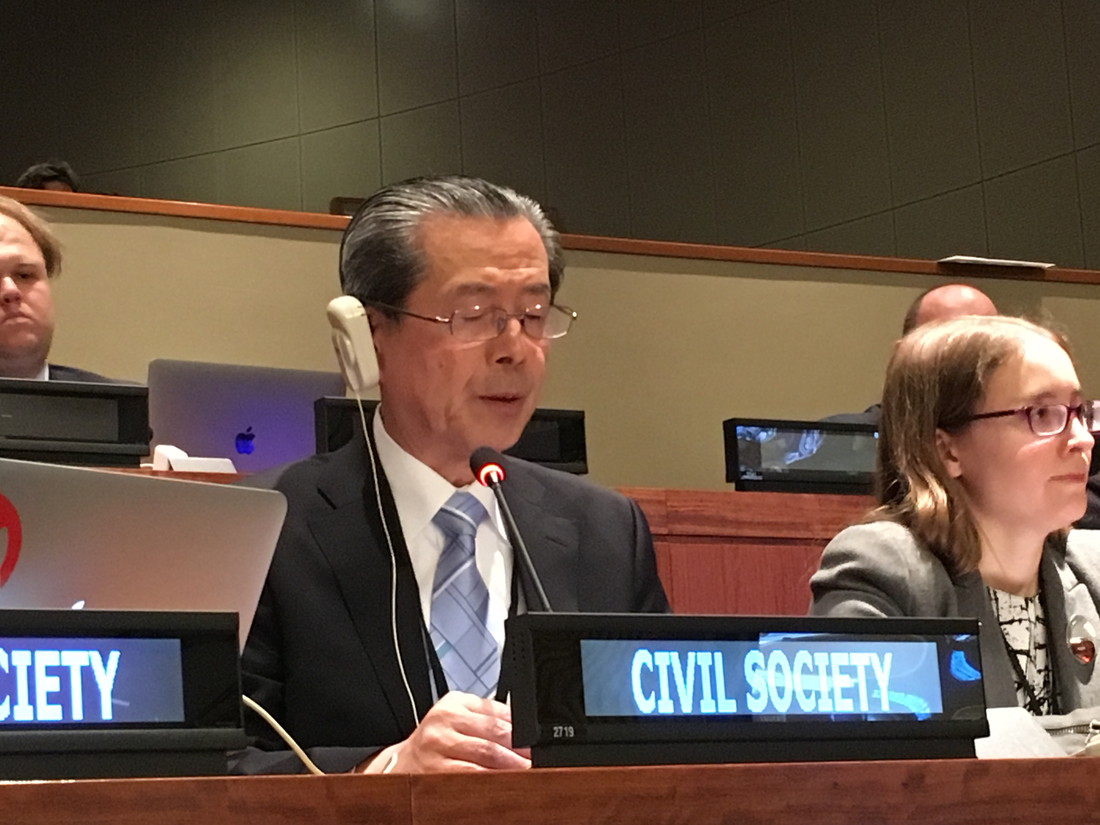 March 2017: Secretary General Komizo delivering speech at the First Session of the UN Negotiation on the TPNW 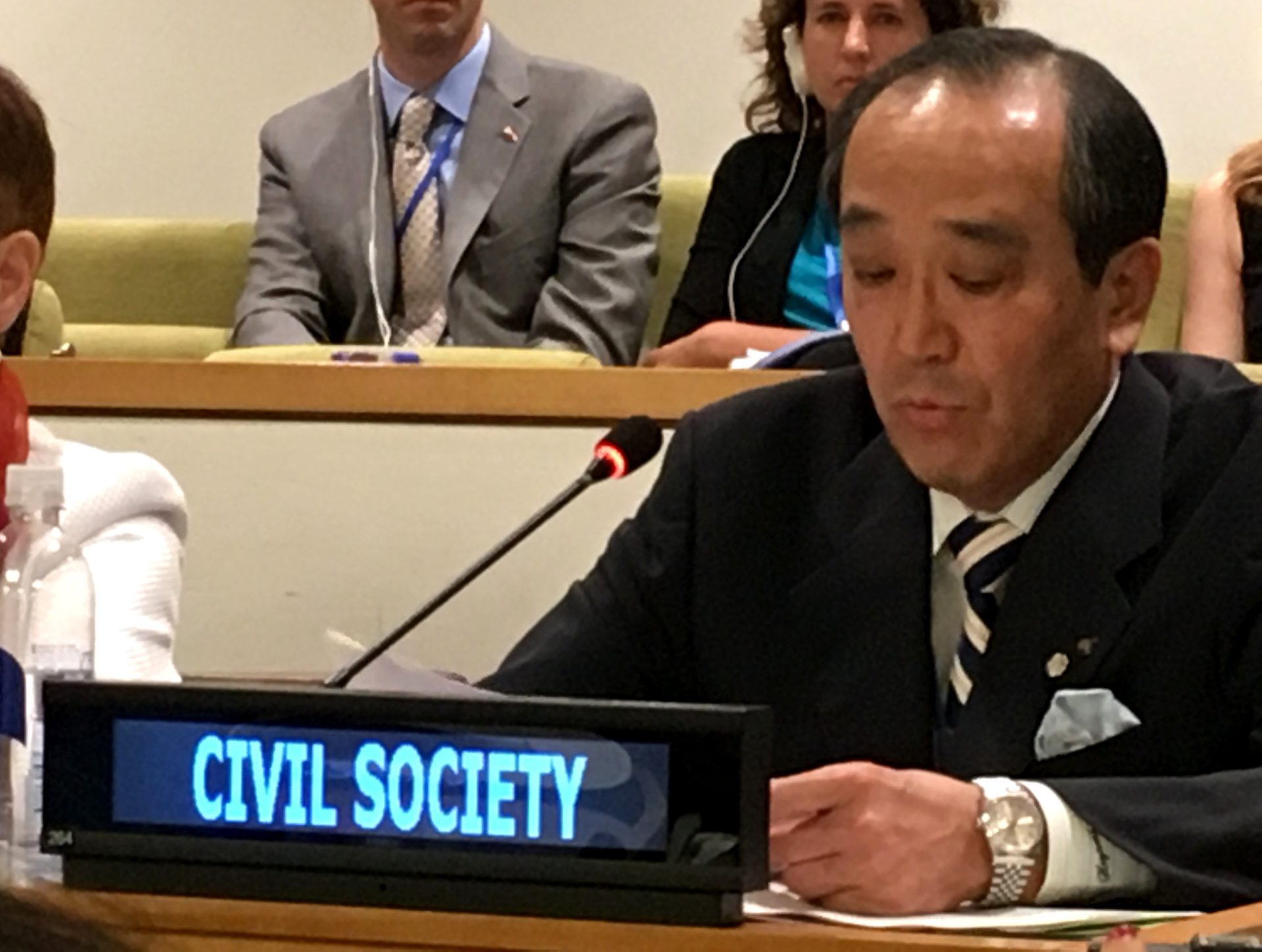 June 2017: President Matsui delivering speech at the Second Session of the UN Negotiations on the TPNW 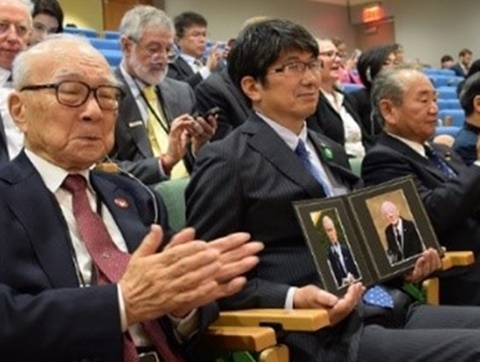 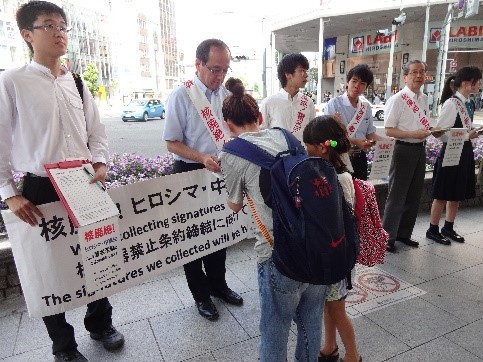 July 2017: Petition drive by President Matsui and high school students in the street 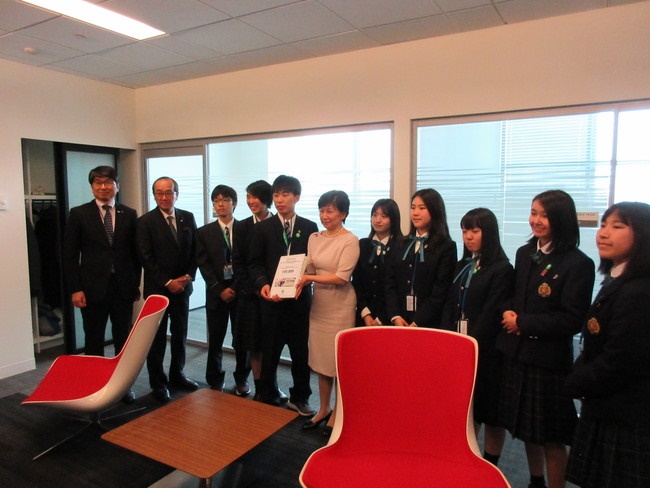 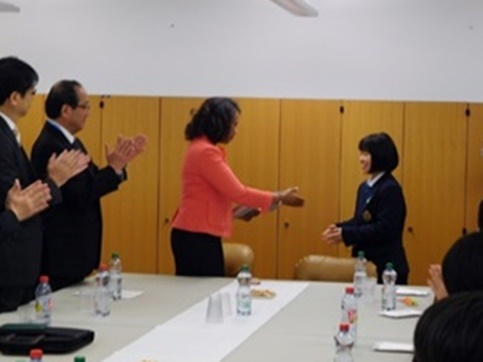 April 2018: High school students presenting signatures to Ambassador Elayne Whyte Gomez, the President of the UN Negotiation on the TPNW