Taking this opportunity, President Matsui gave a lecture at Punahou School to communicate the hibakusha’s earnest desire for nuclear weapons abolition and to share their message of peace.

Meeting with Former US Ambassador to Japan Ms. Caroline Kennedy

On behalf of President Matsui, Secretary General Komizo attended a meeting with Ms. Kennedy, alongside the Managing Director of the City of Honolulu, Japanese Consul General in Honolulu Mr. Ito, and the Mayors of the Honolulu’s three sister cities in Japan (Uwajima, Chigasaki and Nagaoka Cities). Mr. Komizo expressed his gratitude to Ms. Kennedy for her efforts to realize Former US President Obama’s visit to Hiroshima in 2016, and asked for her continued support and cooperation with initiatives of Mayors for Peace aimed at the realization of a world without nuclear weapons. 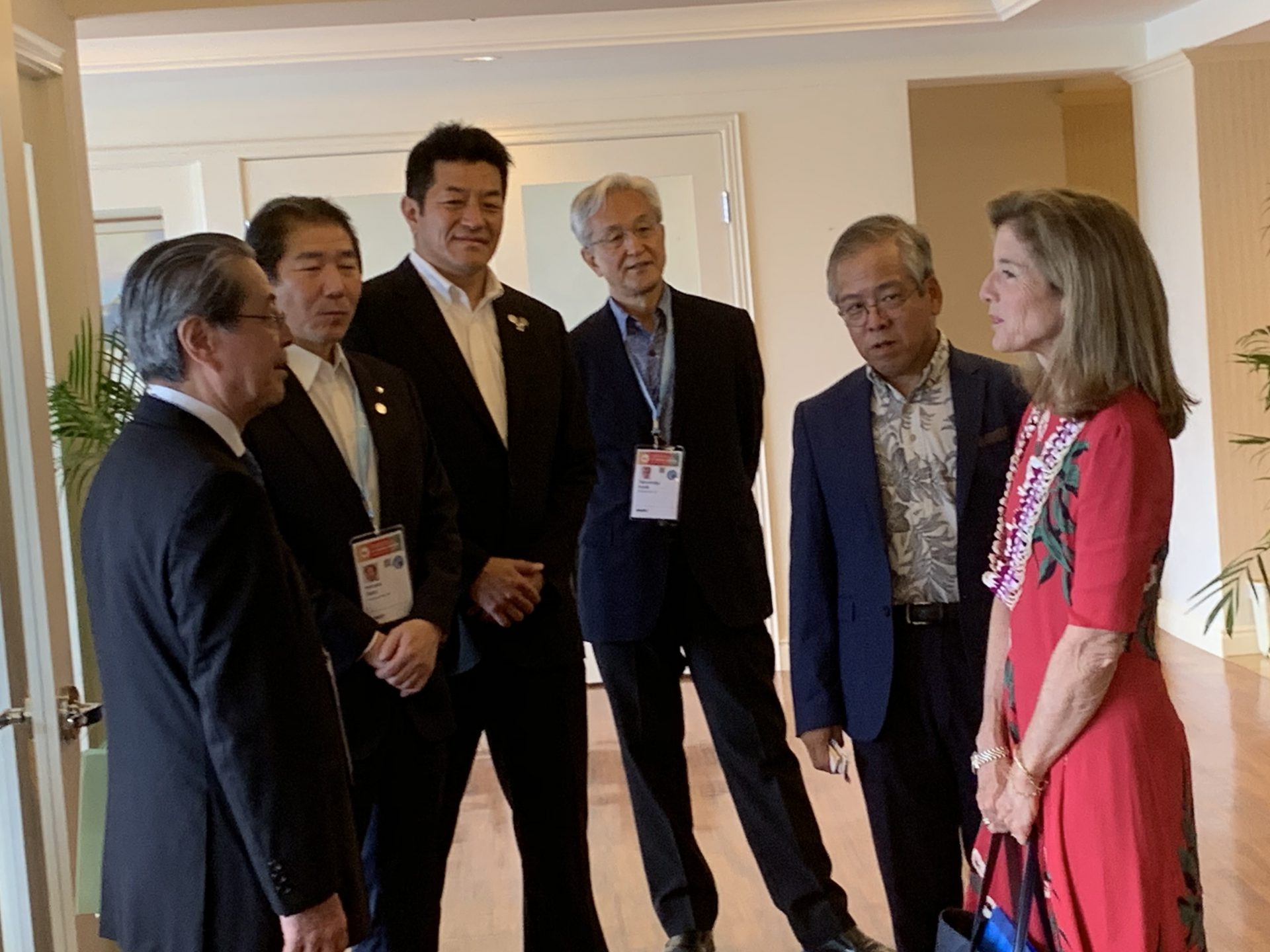 Secretary General Komizo participated in a Sister City Summit on behalf of President Matsui. This summit was joined by representatives from the Japanese Consulate General, the City of Honolulu, and the above-mentioned three Japanese cities. Each representative shared the background of their sister city agreement, and they discussed how to incorporate sister city exchanges into their municipal projects and further develop them. Mr. Komizo pointed out that many Japanese immigrants in Honolulu have their origin in Hiroshima, which led to the sister city relationship. He then introduced those present to the activities of Mayors for Peace and asked for proactive involvement from the participating sister cities. 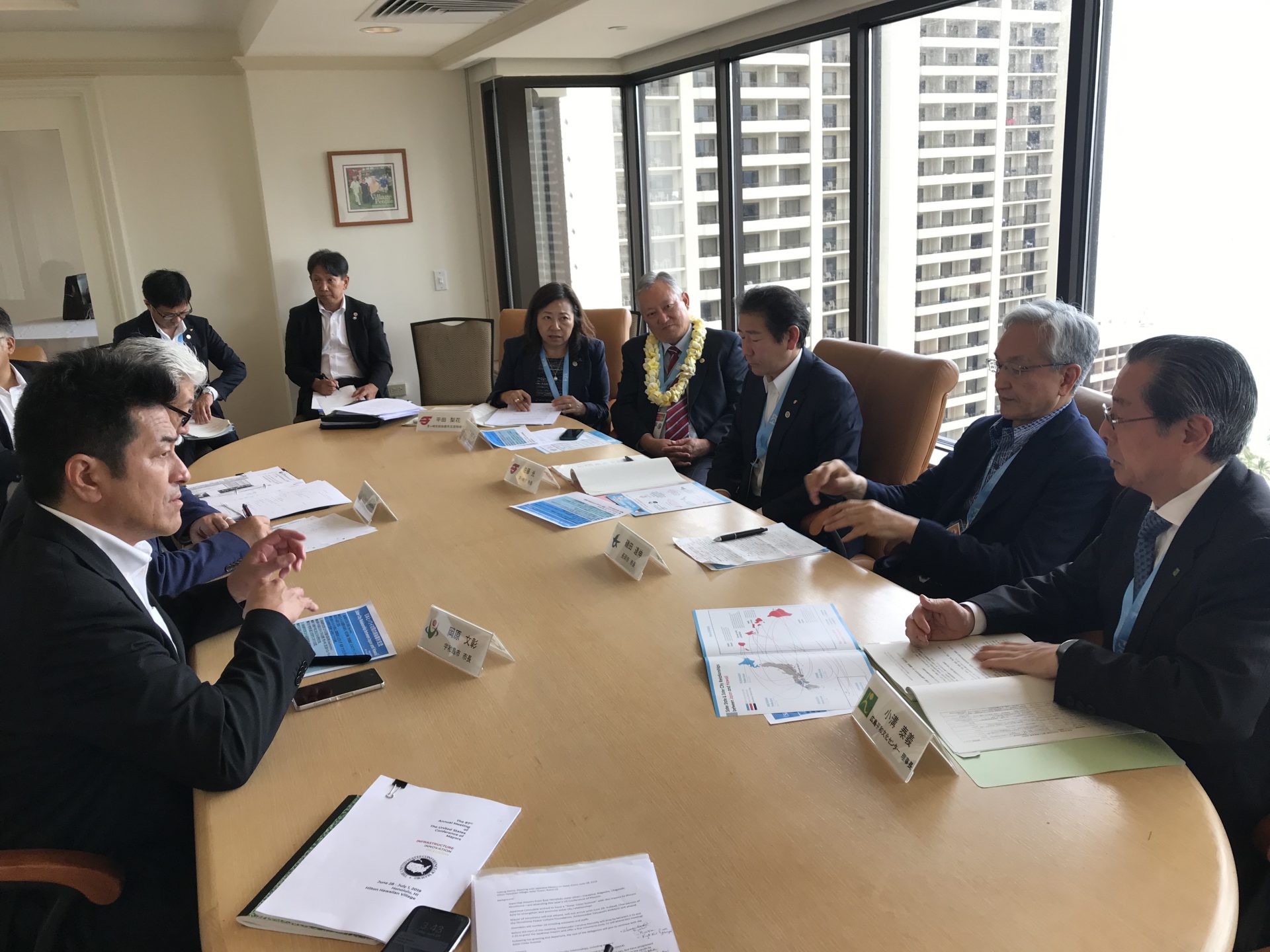 During the morning plenary session, Former US Ambassador Kennedy gave a speech, and shared stories of her father, Former US President Kennedy, such as his view that not only Washington but also mayors who tackle civic issues everyday actually drive the nation in many ways, and his desire for a world without nuclear weapons. She then spoke of the key concepts of President Obama’s speech in Hiroshima―“reconciliation” and “moral awakening”―and emphasized the importance of them, adding her own memories and her thoughts on Hiroshima. After the speech, Mr. Komizo had a chance to make a comment. He expressed his appreciation to Ms. Kennedy for her efforts to make President Obama’s visit to Hiroshima possible, and called for continued collaboration with Mayors for Peace for the realization of a world free from nuclear weapons. 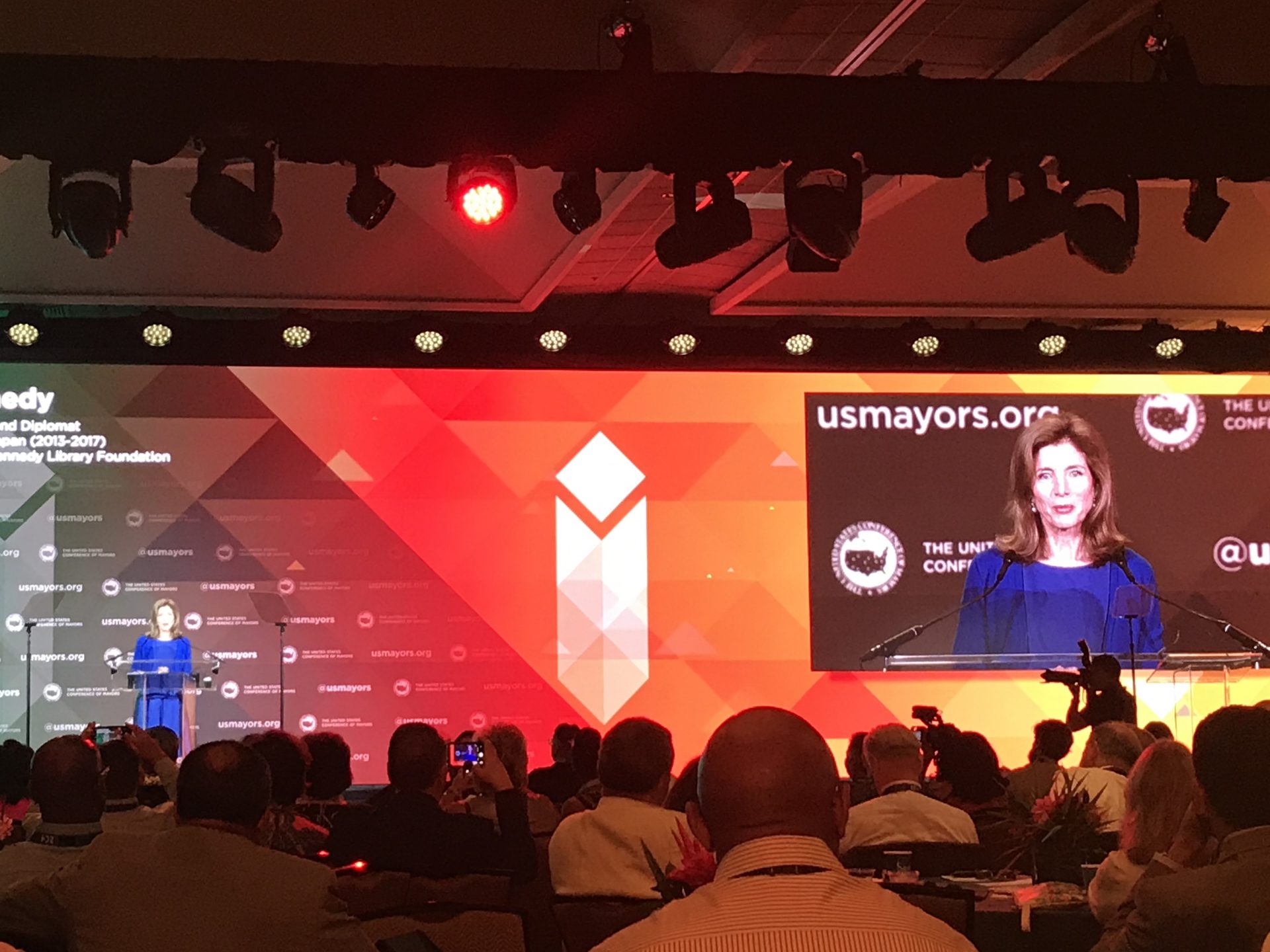 After arriving at Honolulu, President Matsui paid a visit to the Hawaii Japanese Immigration Cenotaph and other memorials. In honor of the immigrants from Hiroshima who struggled to settle down in Hawaii and in mourning of those lost in World War I and II, the President laid flowers and observed a moment of silence.

During the session, “The Pathway to 100% Renewable Energy in America’s Cities,” Mayor Caldwell of Honolulu referred to President Obama’s visit to Hiroshima in 2016 at the beginning of his own speech, and introduced President Matsui saying “From that historical city, the Mayor of Hiroshima has come to join us. Next year will be the 75th anniversary of the atomic bombing of Hiroshima. We should never repeat the tragedy of Hiroshima and Nagasaki.” President Matsui stood up and bowed in response, which was greeted by an applause by the audience. 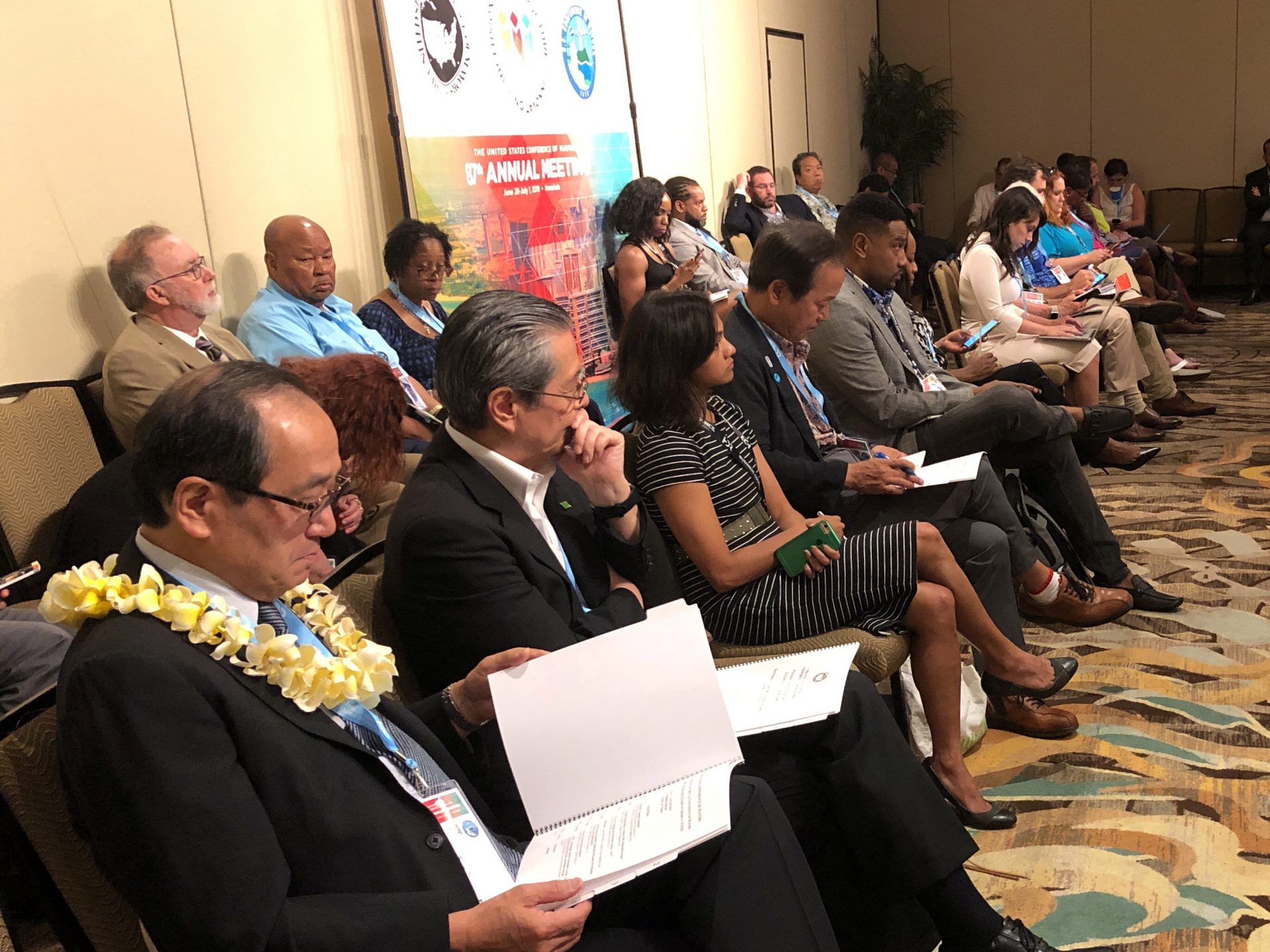 President Matsui had the opportunity to deliver a speech at the USCM meeting. President of the USCM, Mayor Benjamin of Columbia, South Carolina, introduced Mr. Matsui, saying “As the President of Mayors for Peace, he has been tirelessly working with member cities […] including Mayor of Des Moines Cownie to foster and expand international support for a world without nuclear weapons. […] Our two organizations have had a long and productive relationship for many years. In the world we live in never has this Mayors for Peace mission been more important and timely,” and invited Mr. Matsui to take to the stage.

After explaining the initiatives of Mayors for Peace, President Matsui said, “The hibakusha, whose average age is over 82, continue to passionately appeal for a world without nuclear weapons based on their conviction that no one shall ever again suffer as we have,” and added, “while every one of the nuclear-armed states is spending billions of dollars to modernize and upgrade their arsenals, that money could be much more productively spent to meet the needs of cities and the people who live in them. As mayors, you are working every day for the wellbeing of your citizens, but all your efforts could be for naught if nuclear weapons are used again. I am here today to share my sincere wish for all of you to walk with us on the path towards a world without nuclear weapons,” which received a round of applause.
（President Matsui’s speech） 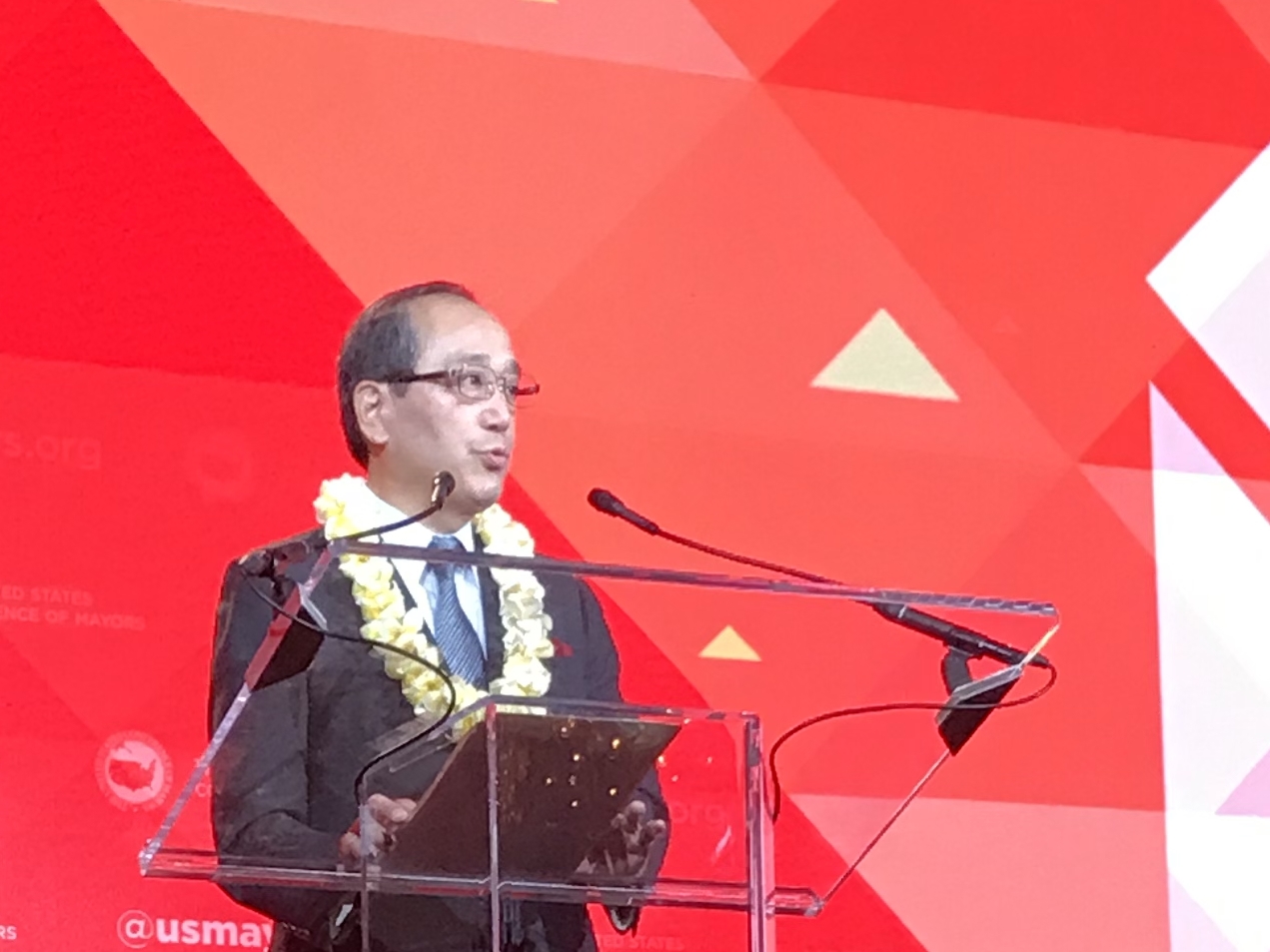 During an afternoon session with the theme “Women Mayors Leadership,” President Matsui listened to a speech by Ms. Gabbard, a member of the US House of Representatives from Hawaii who has announced running for President of the United States. As Mr. Matsui mentioned in his speech, Ms. Gabbard pointed out that a lot of tax has been spent on the development of nuclear weapons and said, “In Hawaii for example, that money should be used for the renewal of aging infrastructure. As such, national security issues directly affect citizens’ lives. I decided to run for President to appeal for this.” After her speech, President Matsui greeted Ms. Gabbard and asked her to visit Hiroshima and to collaborate with Mayors for Peace. 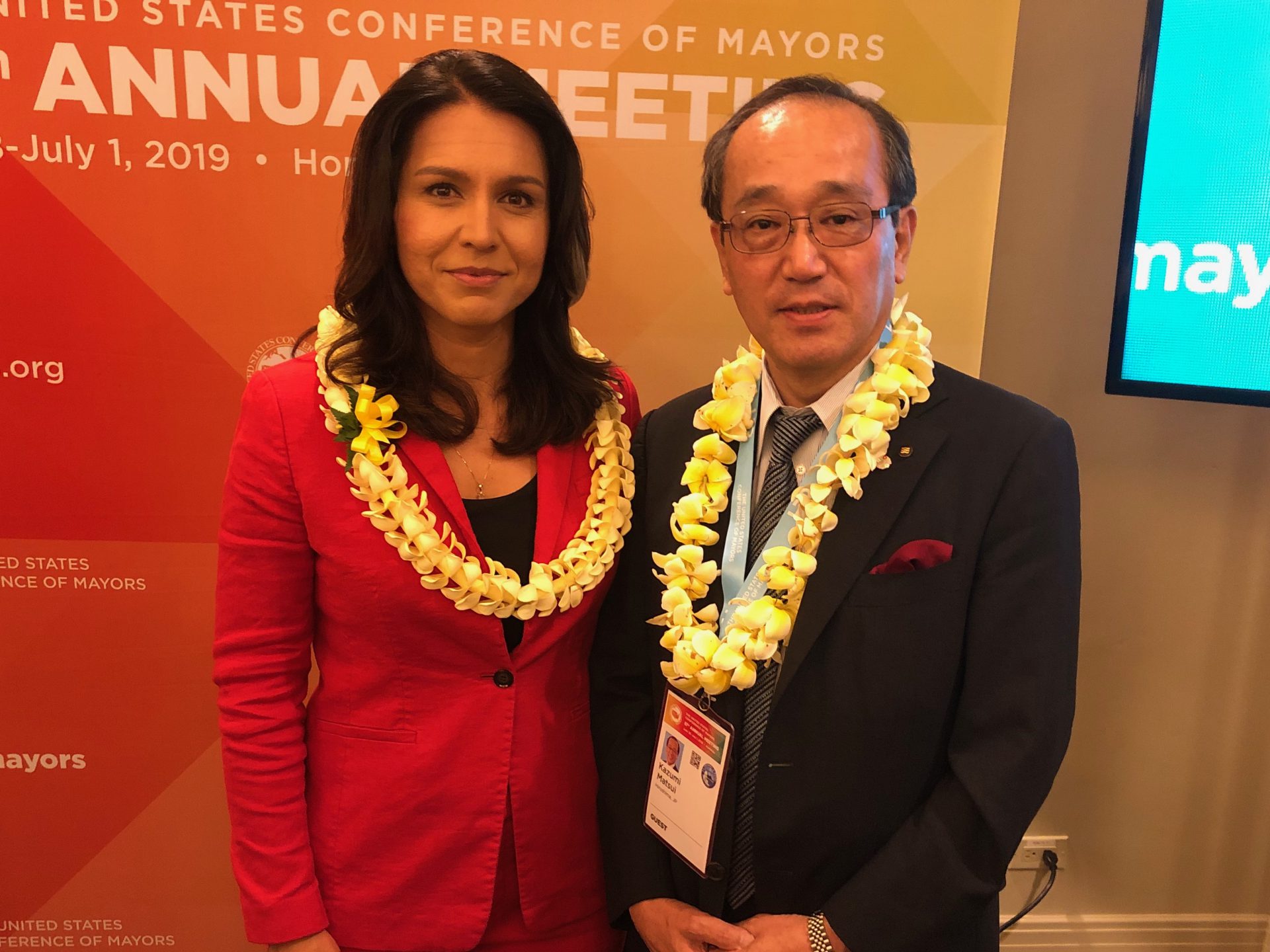 President Matsui gave an interview to a Hawaiian newspaper. He said, “My mother and some relatives are hibakusha, but they didn’t want to speak of their cruel experiences. After being elected Mayor, I had a chance to listen to many hibakusha stories and their messages. That made me further understand how my mother and relatives felt.”

The second half of the interview was joined by Mayor Doyle of Beaverton, Oregon, who has co-sponsored the USCM resolutions calling for nuclear weapons abolition in support of Mayors for Peace. Mayor Doyle made a powerful comment that mayors, along with citizens, drive the countries, and Mayors for Peace will thus make changes in countries around the world to realize a world without nuclear weapons.

Interview with Mayor Matsui by “the Maui Times” 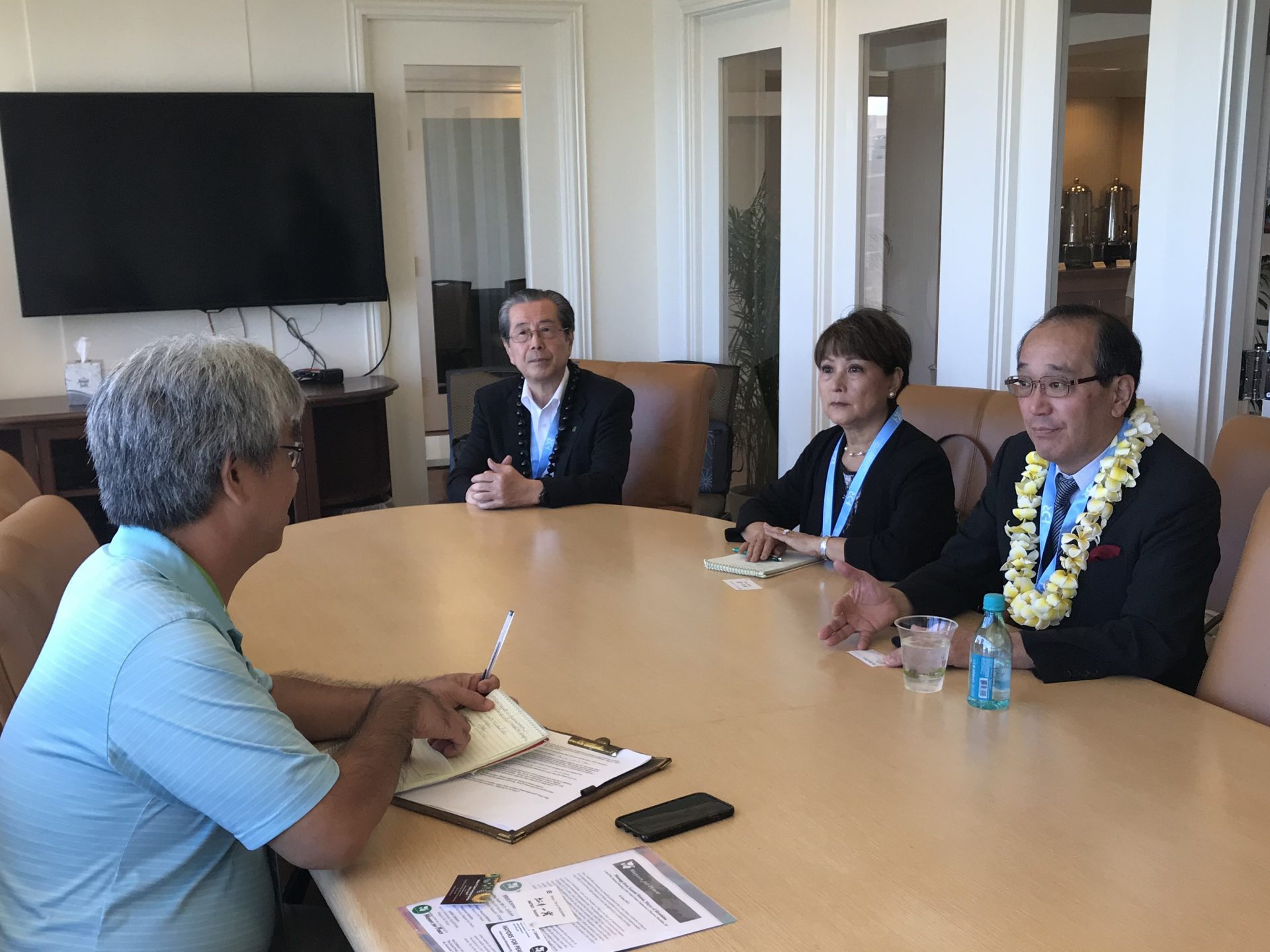 President Matsui gave a lecture to approximately 130 high school students studying Asian history during a summer school hosted by Punahou School, former US President Obama’s alma mater. He communicated the realities of the atomic bombing and the message of the hibakusha, and called for “walking together with us on a path toward a world without nuclear weapons.” The students took notes while listening to the lecture and asked many questions after the talk. In response to one of the questions, President Matsui said, “The dropping of the atomic bombs was a very sad event for all mankind. In order not to repeat the tragedy, it is important for us to think reasonably how to solve conflicts of opinion peacefully and to pass down a sustainable Earth.” He handed out a thousand paper cranes which were folded by junior high school students of Kanagawa Prefecture to a young representative from the audience, passing on his message of peace.

Video of the lecture at Punahou School by President Matsui 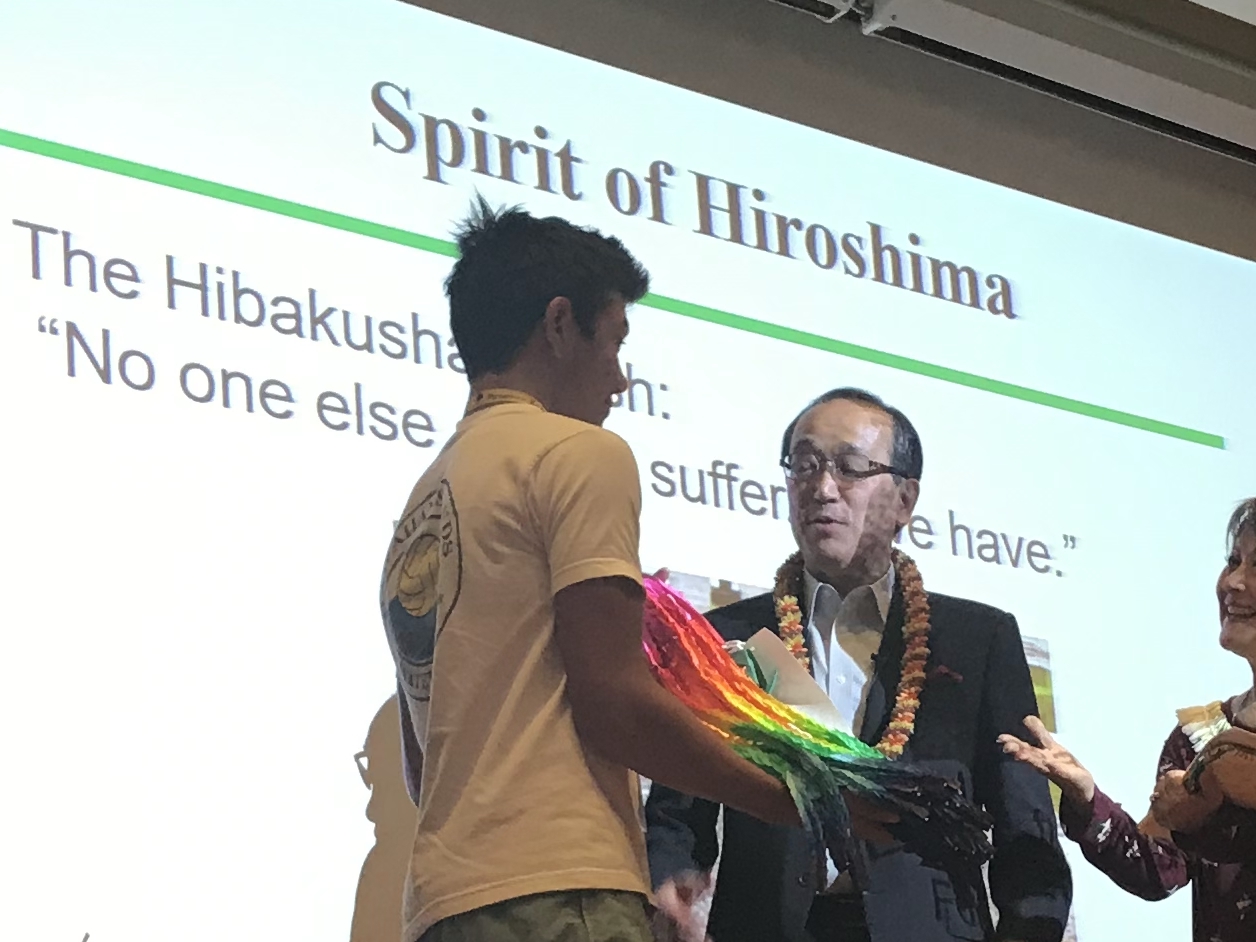 Adoption of the Resolution

During the morning session, a resolution calling for nuclear weapons abolition in support of the initiatives of Mayors for Peace was unanimously adopted by the USCM for the 14th consecutive year since 2006.
（Resolution）

During this day’s session, Mayor Barnett of Rochester Hills, Michigan, delivered an inaugural speech as the incoming President of the USCM. Mayor Barnett emphasized that everyone has a right to live a happy life and that mayors should strive to make that possible. After the speech, President Matsui handed Mayor Barnett one thousand paper cranes folded by junior high school students of Osaka Prefecture, and invited Mayor Barnett to join Mayors for Peace.

At an evening event hosted by the City of Honolulu, Mr. Matsui called on two mayors to join Mayors for Peace, receiving positive responses. They were Mayor Benjamin of Columbia, who has served as the President of the USCM until this annual meeting and will announce a peace city declaration this August, and Mayor Callaway of Hillsboro, Oregon, which has grown a second generation A-bombed ginkgo tree. 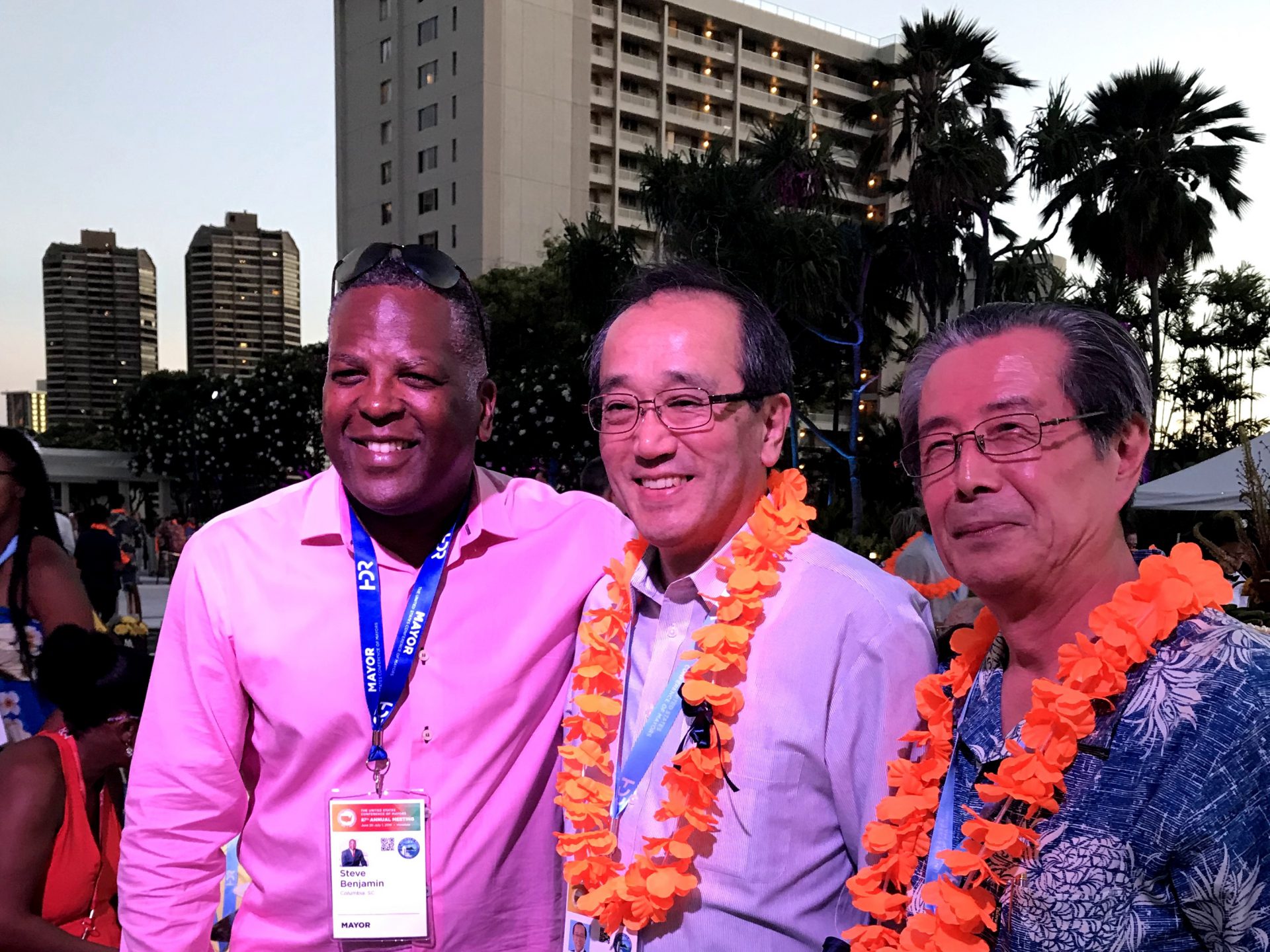 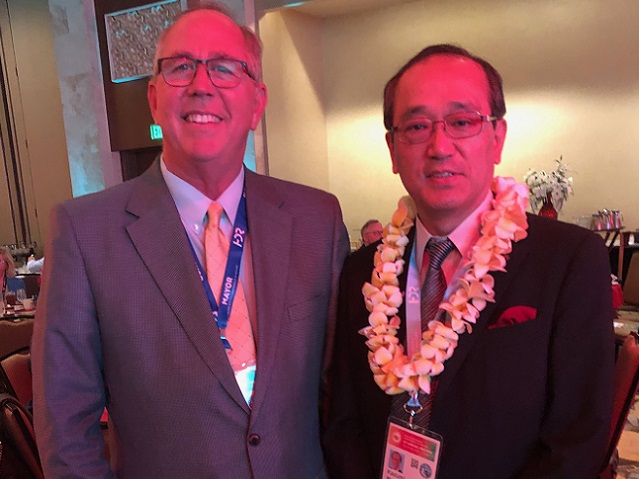