A Mayors for Peace delegation, including the mayors of Hiroshima and Nagasaki, who serve as the President and Vice President of Mayors for Peace respectively, attended the Third Session of the Preparatory Committee (PrepCom) for the 2020 NPT Review Conference held in New York. They emphasized to the representatives of the UN and national governments the need for good faith negotiations—in accordance with Article VI of the NPT—and the importance of promoting the Treaty on the Prohibition of Nuclear Weapons (TPNW) to bring about the abolition of nuclear weapons. They also emphasized that Mayors for Peace would encourage the creation of conditions that support the leadership of politicians who aim to create a world without nuclear weapons by fostering more widespread solidarity among civil society. During the PrepCom, Mayors for Peace also hosted a side event, the “Mayors for Peace Youth Forum”, and Mr. Matsui, President of Mayors for Peace and Mayor of Hiroshima, gave a lecture at the United Nations International School.

During her opening remarks, Ms. Izumi Nakamitsu, who is the UN Under-Secretary-General and High Representative for Disarmament Affairs, stated that it will soon be 50 years since the NPT entered into force, and that it is important to establish an NPT regime that brings peace through dialogue and negotiations in good faith among states, amid the recent challenging circumstances surrounding nuclear weapons. 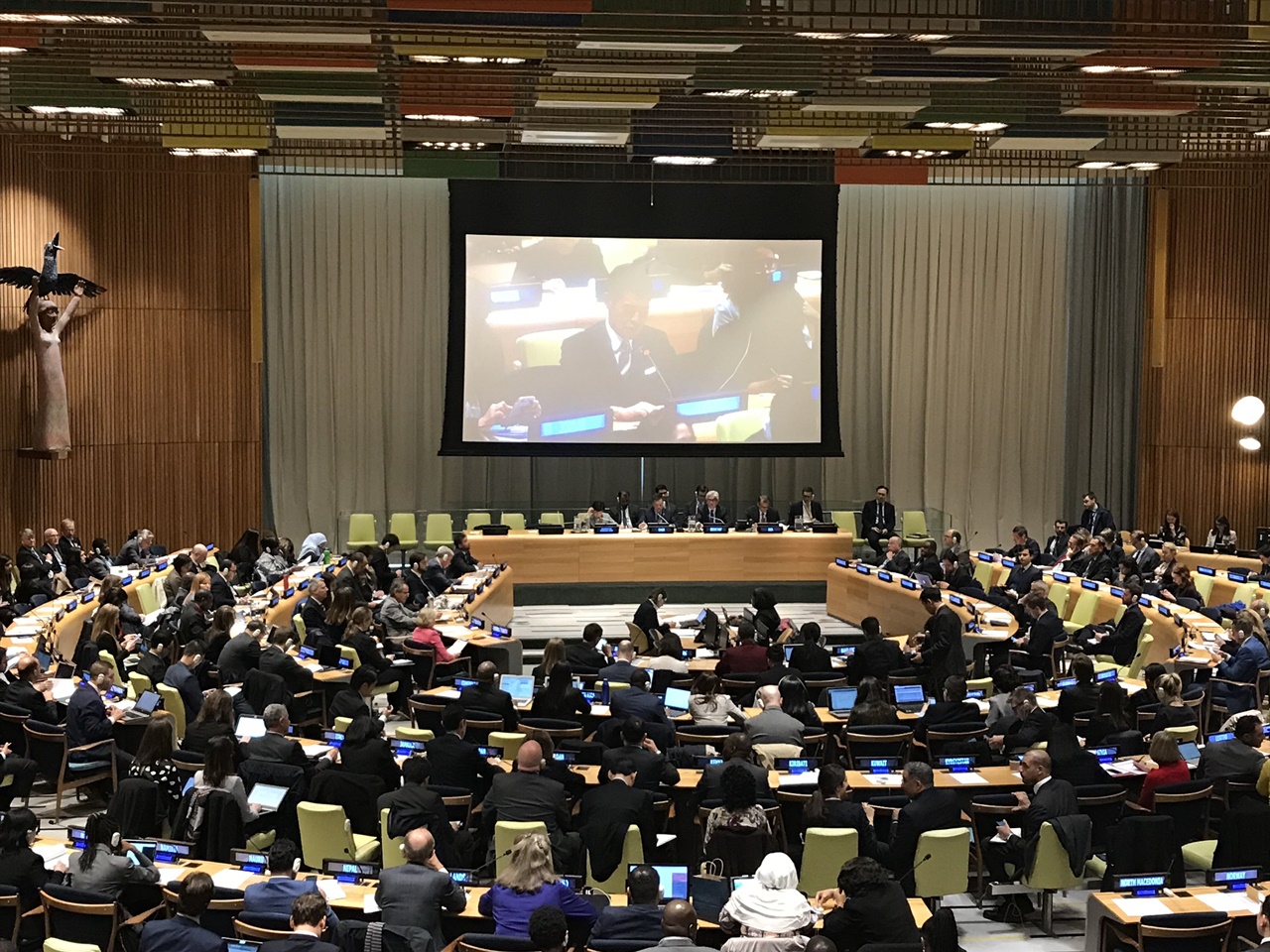 President Matsui and Vice President Taue asked Ambassador Nobushige Takamizawa to support the Chair Syed’s visit to the A-bombed cities. Secretary General Komizo told the Ambassador about movement towards a resolution on the abolition of nuclear weapons among state and city legislatures in the United States. 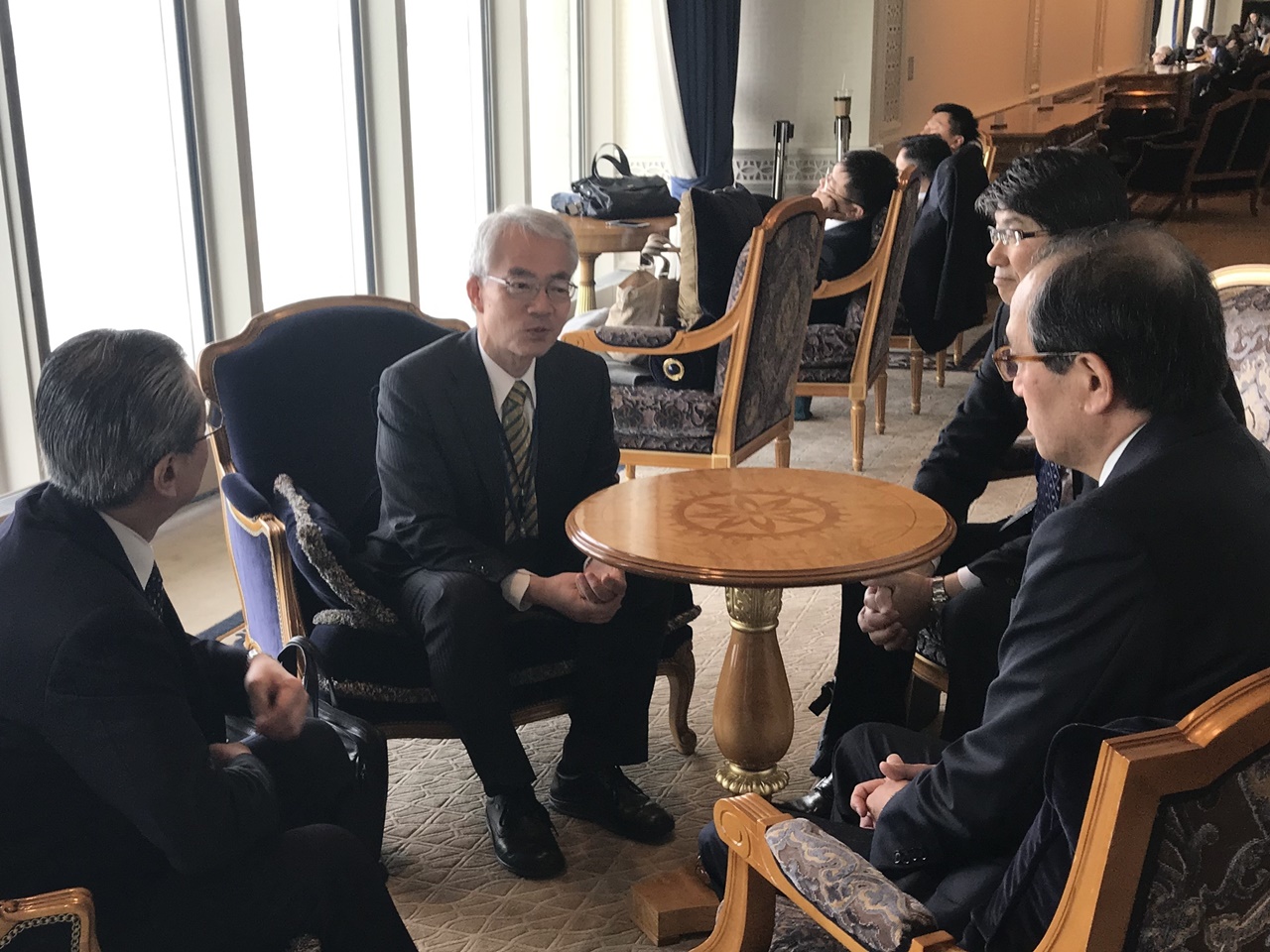 President Matsui emphasized that if all states could work in a spirit of transparency and dialogue as the UK does, we would be able to find a way to reach common ground. He also expressed his hope to Ambassador Aidan Liddle that the United Kingdom would demonstrate leadership among the nuclear states on the path towards the abolition of nuclear weapons, sharing in the Hibakusha’s ardent desire for nuclear abolition. 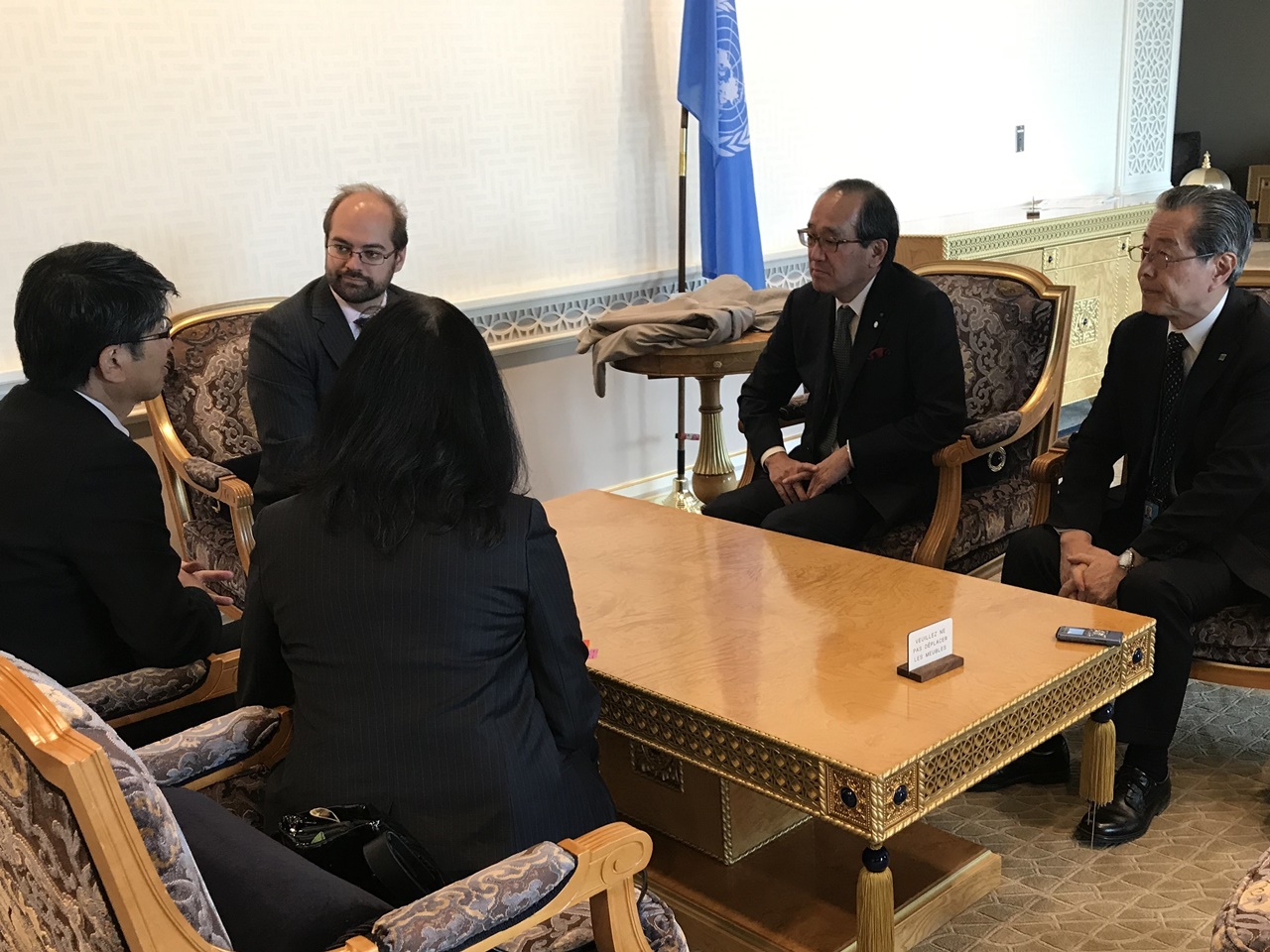 President Matsui said that it is important to increase the number of member cities in nuclear armed states and to generate momentum for nuclear abolition in civil society. He also expressed his particular hope to work on raising awareness of nuclear weapons issues among young people. 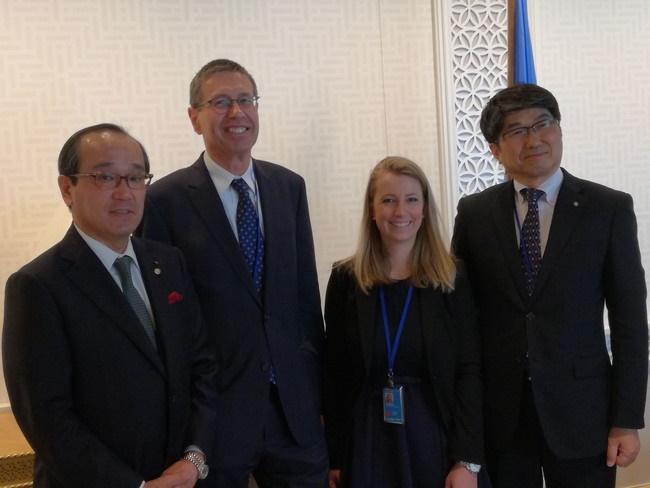 President Matsui gave a lecture to about 130 second grade students of the United Nations International School. He presented the realities of the A-bomb and the hibakusha’s wishes for peace. He also emphasized that while states continue to pursue national interests, it might be difficult to change their reliance on nuclear deterrence. However, he insisted that it is crucial to spread throughout civil society around the world the belief that nuclear weapons should be eliminated, so that mankind can live peacefully and our planet Earth can be a sustainable one.

After the lecture, 8 high school students from Hiroshima gave a presentation to about 40 first grade students, and they engaged in an active discussion on what they could do to build a peaceful world as young people. The Hiroshima students have been involved in the Mayors for Peace petition campaign, which calls for all states to join the Treaty on the Prohibition of Nuclear Weapons as soon as possible.

※A video of the lecture by President Matsui has been uploaded by UNIS. 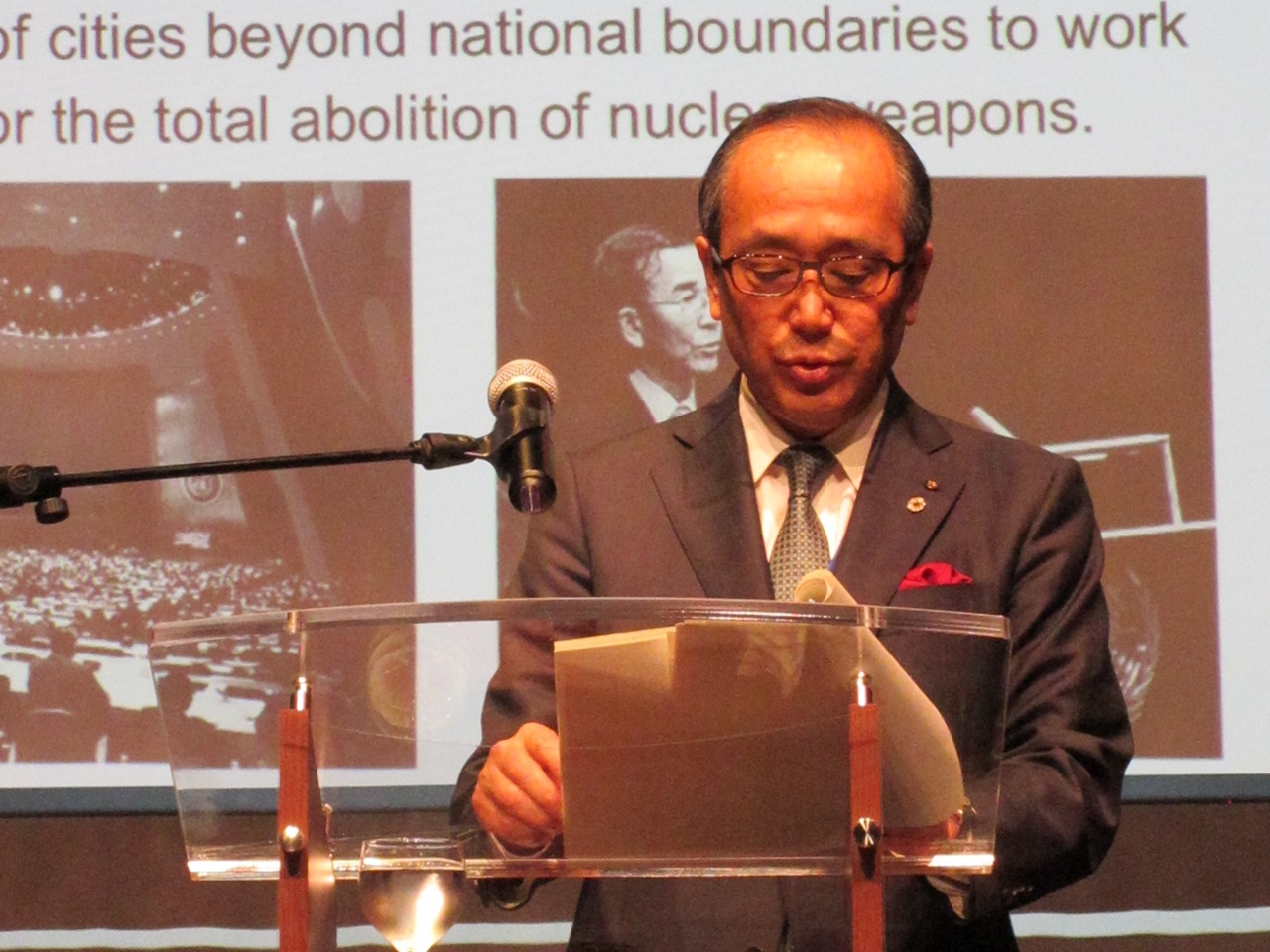 After President Matsui told her about the Hiroshima high school student delegates’ activities, the student delegates had an opportunity to present UN High Representative Nakamitsu with a certificate of approximately 120,000 signatures having been collected during the past year, and this was followed by a discussion.

President Matsui expressed that Mayors for Peace, which consists of Mayors who work for their citizens’ safety and security, hopes to work with a focus on ‘a sustainable earth’ to prevent a repeat of the tragedies in Hiroshima and Nagasaki. He added that the City of Hiroshima has been working on the renewal of the Hiroshima Peace Memorial Museum including the improvement of its exhibitions. He expressed his hope that more and more people will see those exhibitions, thus building public support for nuclear abolition. President Matsui asked Ambassador Dell Higgie to continue to promote nuclear disarmament in collaboration with neighboring countries to increase the number of ratifications of the TPNW. Ambassador Higgie said she hopes civil society will continue to be active in this regard. 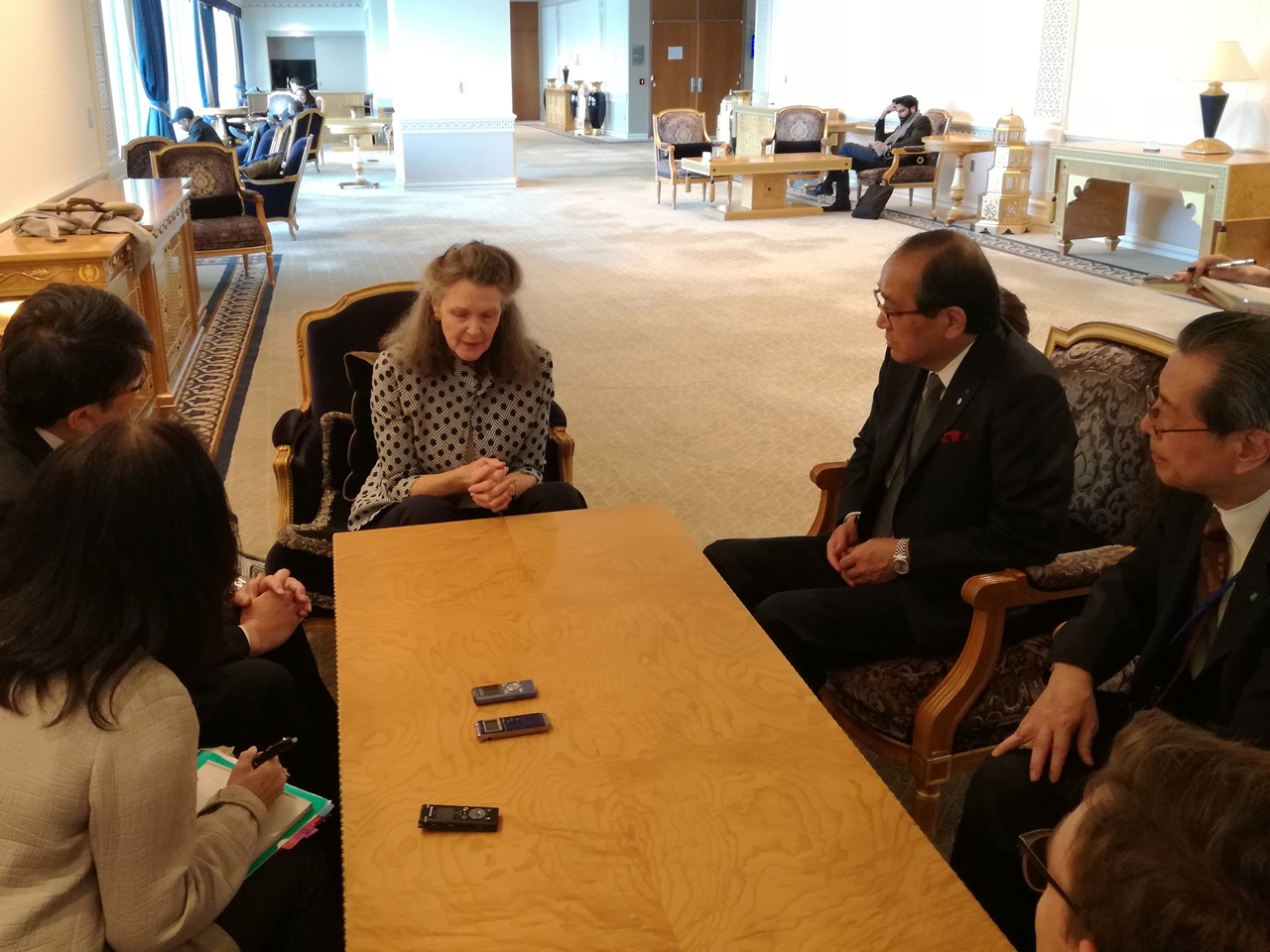 President Matsui and Vice President Taue gave speeches as mayors of the A-bombed cities at the NGO session. They declared their determination that while nuclear armed states continue to modernize their arsenals, rather than fulfilling their NPT Article VI disarmament obligations, Mayors for Peace will with the hibakusha’s wishes in mind continue to push policymakers for nuclear abolition with its partners around the world. They also requested that policymakers of all states, including the nuclear states, take the initiative to earnestly engage in dialogue to seek innovative solutions to turn the confrontational security environment into one of cooperative security. 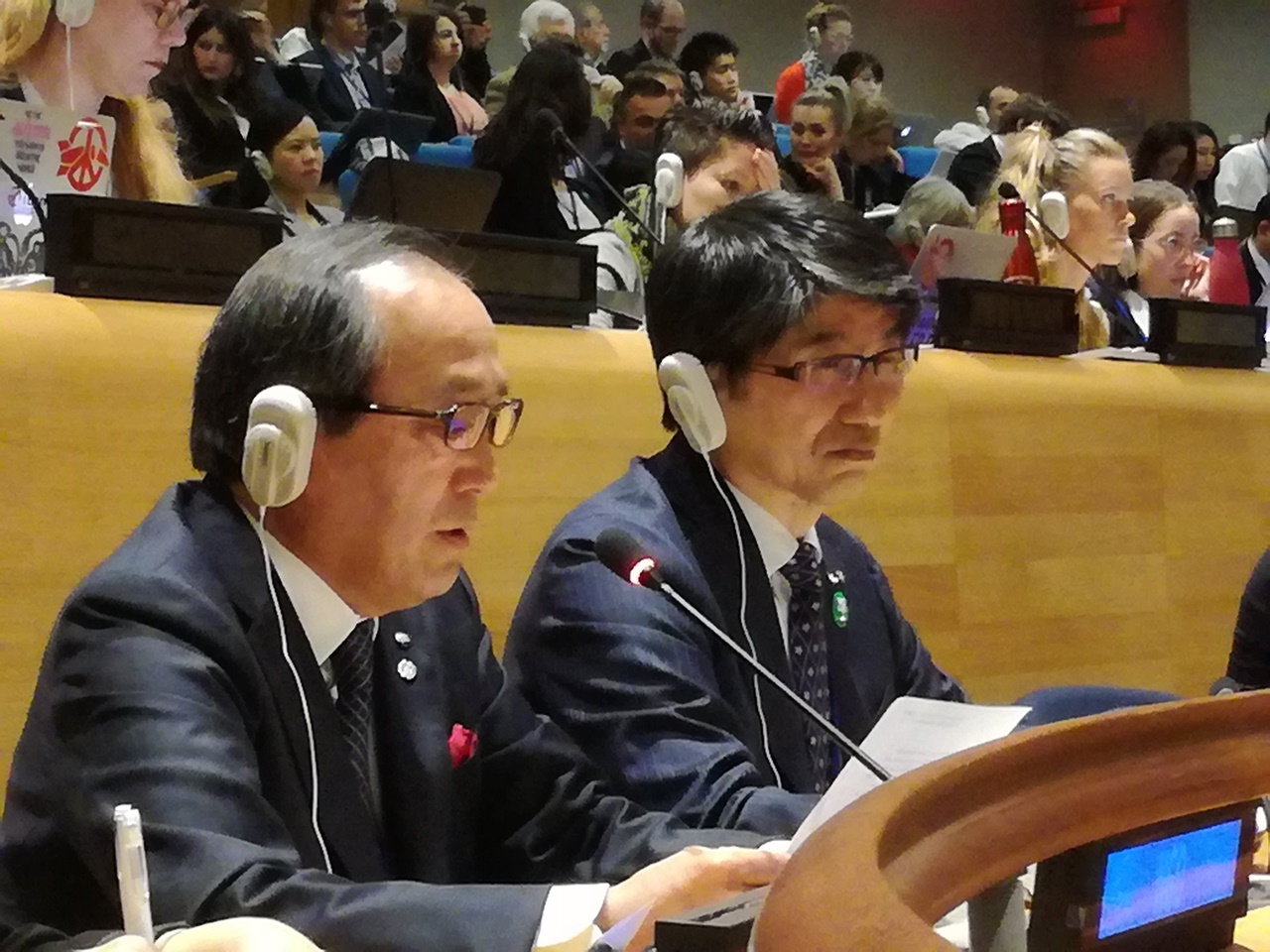 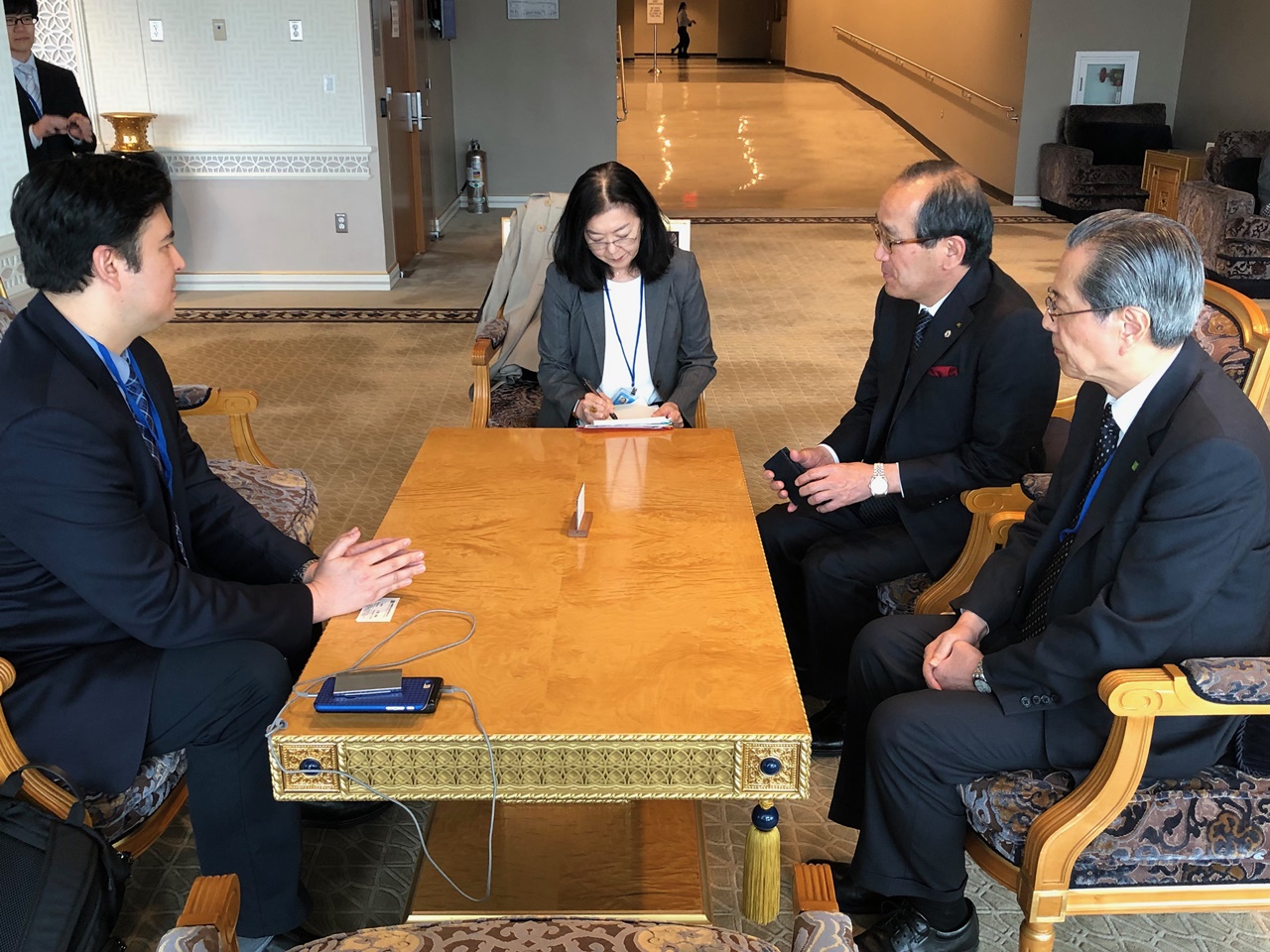 Chairperson Syed Mohamad Hasrin Aidid talked about his plan to make a list of recommendations aimed at consensus building ahead of next year’s Review Conference. He also told how he hoped for support from civil society, especially young people, and that civil society would play a significant role in generating public support for nuclear abolition.

President Matsui explained that Mayors for Peace would devote itself to passing down a ‘sustainable earth’ to future generations, while placing importance on dialogue with citizens and the hibakusha’s wishes. He also expressed his hope that all states might, with next year in mind, work together with respect, mutual understanding, and a comprehensive perspective. 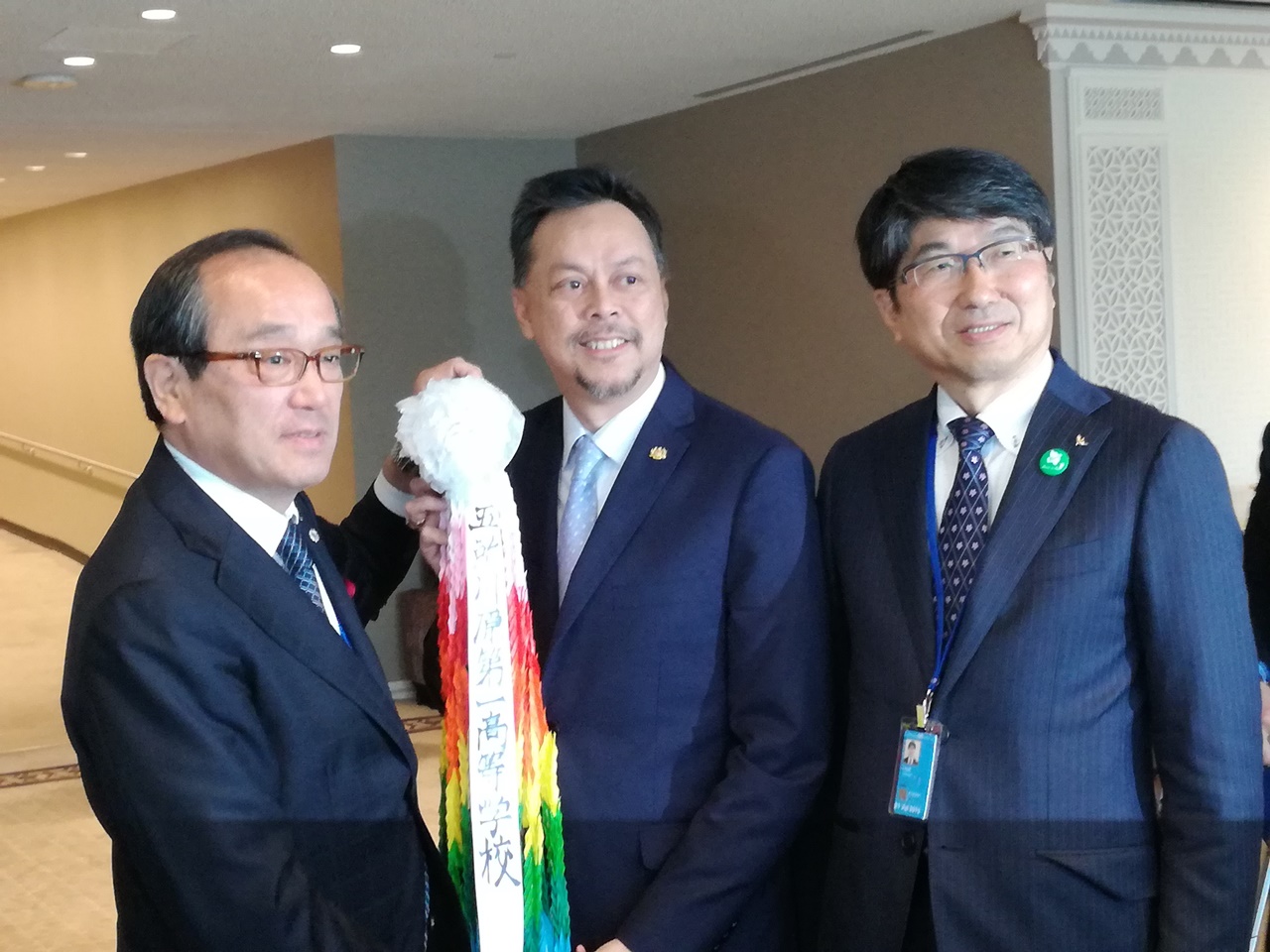 President Matsui expressed his gratitude for the members’ spreading ‘the Spirit of Hiroshima.’ He also told them that while working for his city’s government, he places top priority on citizens’ peaceful lives. He added that he would like to encourage citizens to develop a point of view about what they can do to build and sustain a city where they can live peacefully.

Youth delegations from Hiroshima, Nagasaki, and several NGOs made presentations on their efforts and desire for peace and shared their opinions with each other. 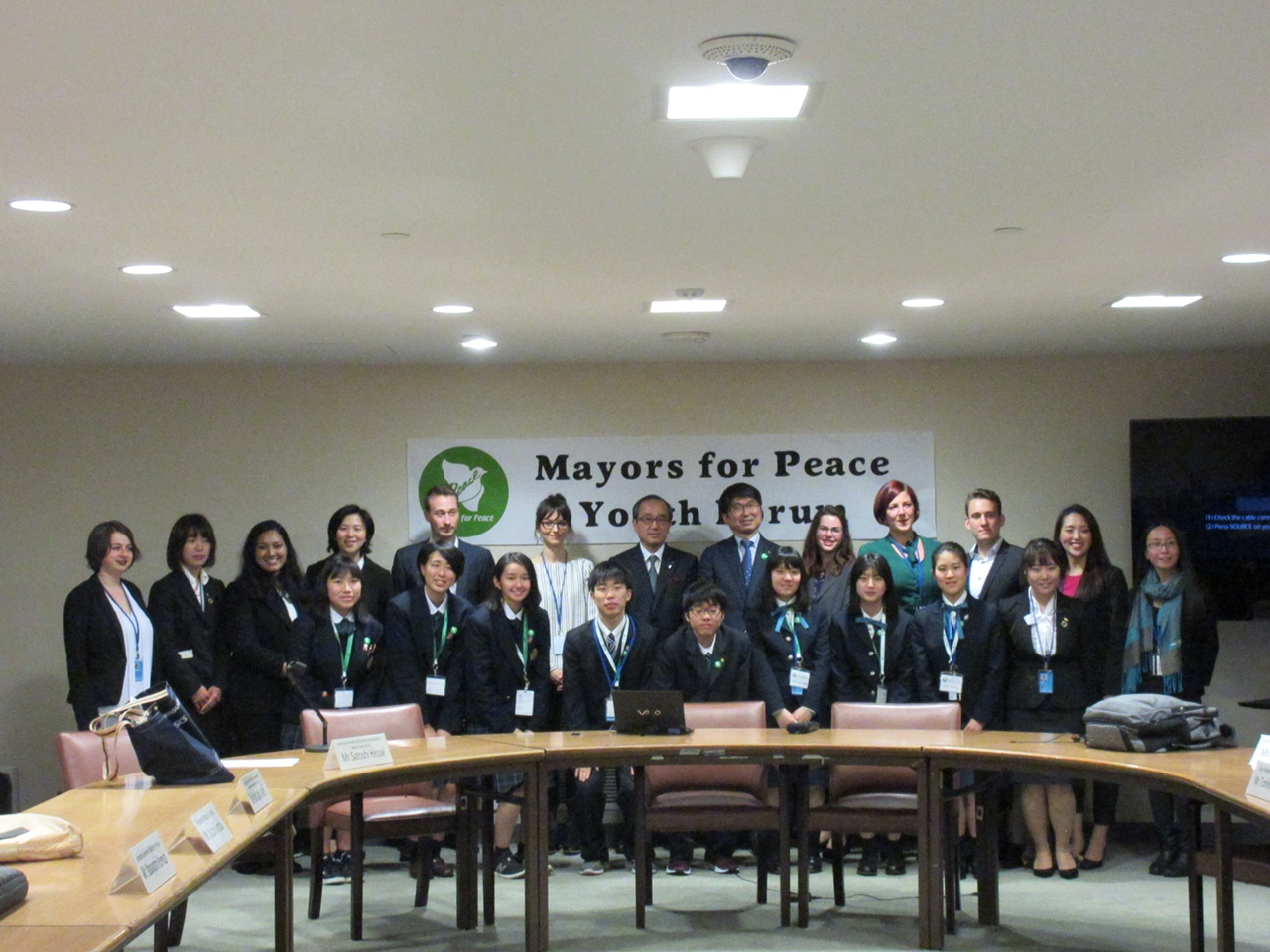 Meeting with Mayor of New York

President Matsui and Vice President Taue were joined at this meeting by Mr. T.M. Franklin Cownie, Mayor of Des Moines, which is the lead city of Mayors for Peace in the US. Mayor Cownie told Mayor Bill de Blasio of New York that resolutions supporting nuclear disarmament and Mayors for Peace activities have been adopted annually for 13 years at the Annual Meeting of the U.S. Conference of Mayors, and that resolutions demanding that the US government sign the TPNW were adopted by the Council of the District of Columbia and other municipal legislatives. He also asked Mayor de Blasio to join Mayors for Peace, a global network of mayors taking responsibility for the well-being of citizens, and work together for lasting world peace. 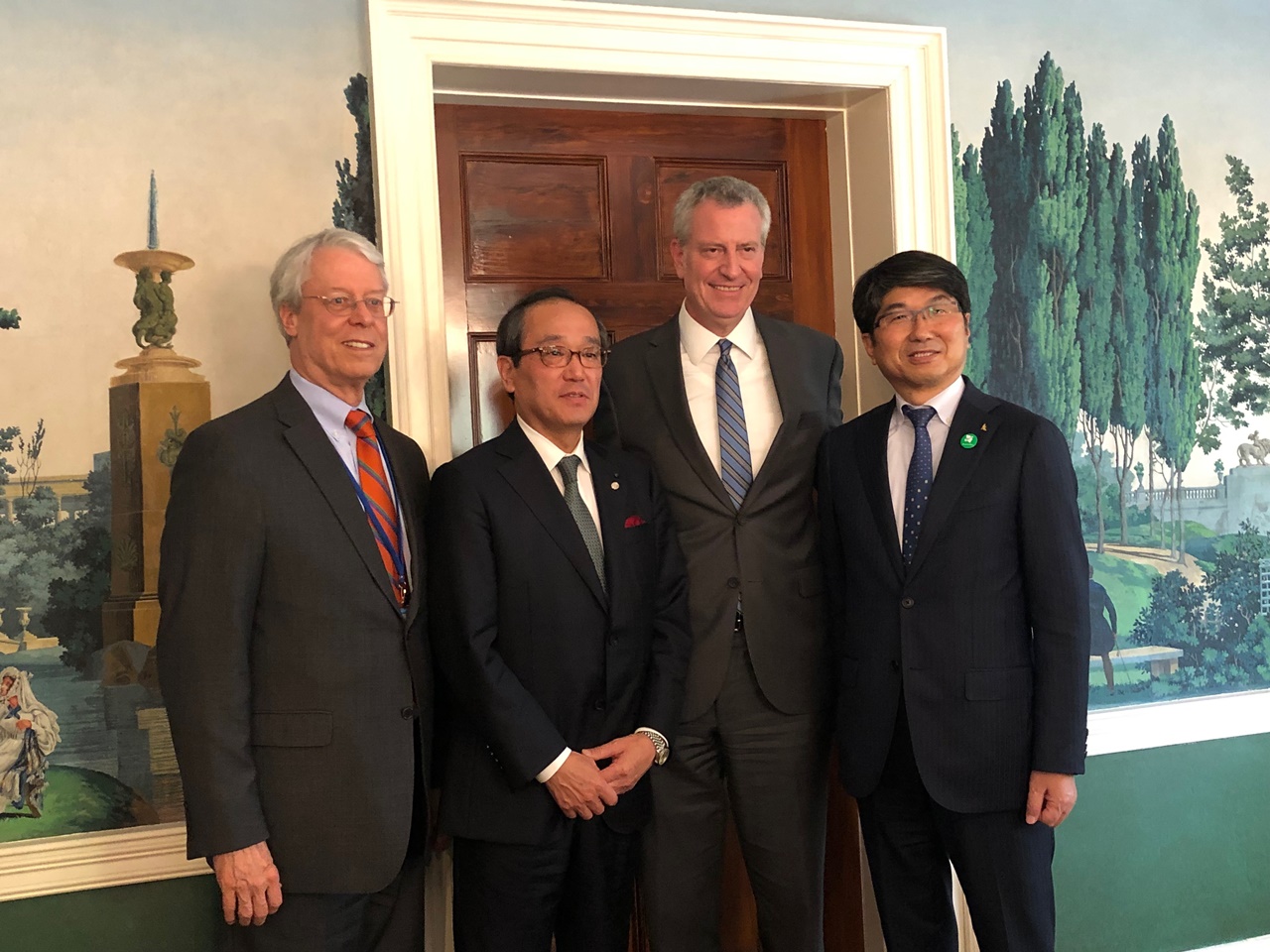 President Matsui stated that it is important to maintain the safety and security of the places where citizens live, and bring together various municipalities’ policies to achieve nuclear abolition while appreciating differences in values. 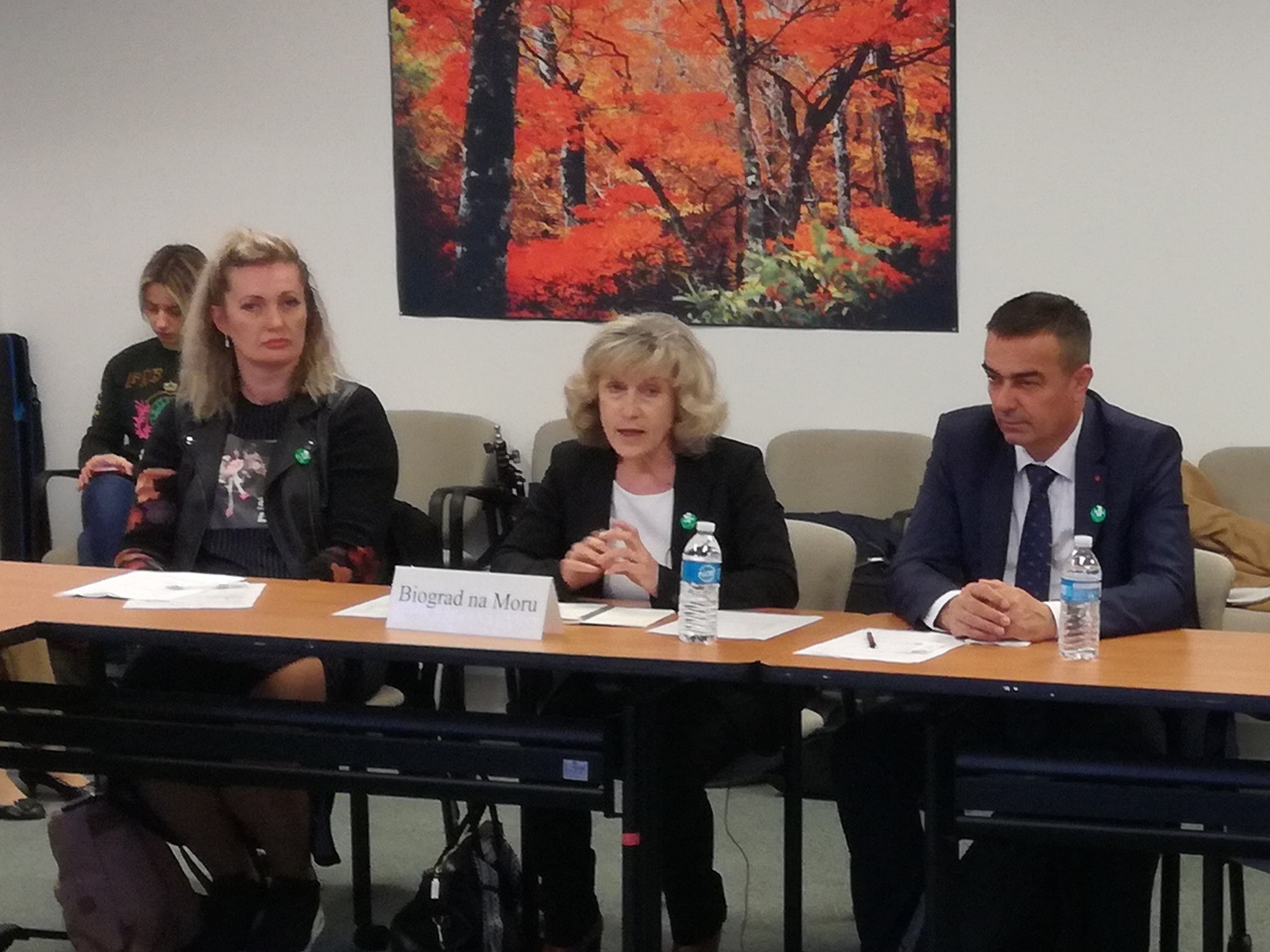 The awards acknowledge and uplift those individuals and organizations who have challenged social norms. Mayors for Peace received the Hersey Prize, a prize that was established last year to recognize contributions in the field of nuclear disarmament and world peace. When President Matsui accepted the trophy, a hammer with a red head, he pretended to bring it down saying: “Let’s smash the doctrine of nuclear deterrence with this!” He then presented a wreath of a thousand paper cranes he had brought from Hiroshima as a symbol of peace, to which the audience responded with a warm round of applause in support. Mayors for Peace hosted a poster exhibition at the United Nations Headquarters at New York, where the PrepCom was held, aiming for the PrepCom participants to deepen their understanding of the reality of atomic bombings.