Mr. Kazumi Matsui, Mayor of Hiroshima and President of Mayors for Peace, and Mr. Yasuyoshi Komizo, Secretary-General of Mayors for Peace, visited the U.S. to attend the 86th Annual Meeting of the United States Conference of Mayors (USCM) held in Boston, MA. President Matsui expressed their hope to see efforts for lasting world peace expand at the municipal and citizen level in the U.S. and asked the mayors in attendance for their support and understanding of Mayors for Peace activities and also invited them to join Mayors for Peace if they have not yet done so.

While he was in the U.S., President Matsui also visited a public school in Cambridge, MA and the Carnegie Endowment for International Peace in Washington D.C., where he gave a talk and shared the realities of the atomic bombing and the hibakusha’s earnest wish for nuclear abolition.

Attendance at the first day of the USCM Annual Meeting

President Matsui attended the opening press conference conducted by the USCM’s executive mayors. In the afternoon, he attended the plenary session where he met Mayor Cownie of Des Moines, IA, the U.S. Mayors for Peace Lead City, and Mayor Caldwell of Honolulu, HI, a sister city of Hiroshima and the host of next year’s Annual Meeting of the USCM. 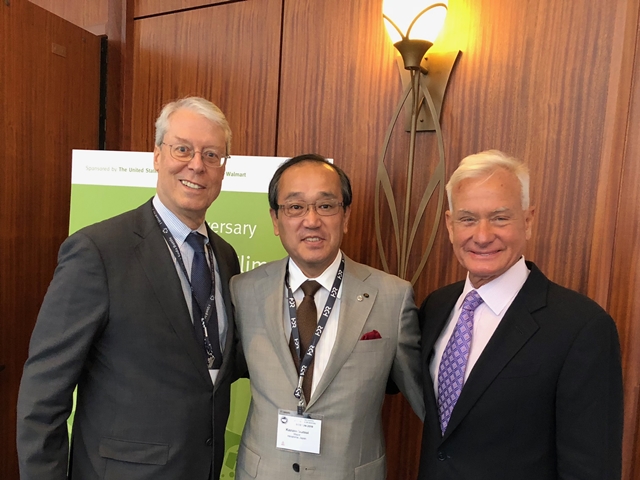 Presentation at the Cambridge Rindge and Latin School

President Matsui visited the Cambridge Rindge and Latin School, a public school in Cambridge, MA, where he gave a talk to about 100 high school students studying world history.

He shared the message of hibakusha that “no one else should ever suffer as we have” and expressed his hope for young people to transcend differences of race, religion and language and engage in forward-looking dialogue so they can create a future without nuclear weapons.

After the presentation, the students asked many questions, and President Matsui responded stressing the importance of mutual understanding through dialogue, respect for diversity and the role of civil society in electing the right political leaders who pursue global sustainable development; and in creating an environment that supports such leaders.

Report of President Matsui’s visit is posted on the school’s website. 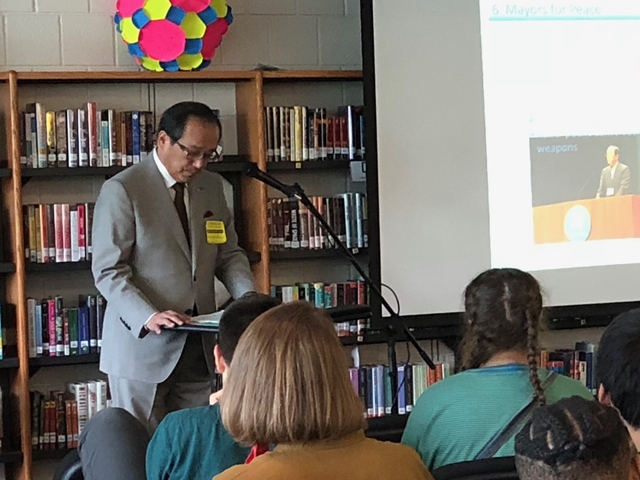 Dinner with Consul General of Japan in Boston

President Matsui met with Mr. Rokuichiro Michii, Consul General of Japan in Boston and reported on his presentation at the high school and exchanged views on various topics, such as the characteristics of the educational systems in the U.S. and Japan. President Matsui expressed his hope that the Hiroshima-Nagasaki Peace Study Courses Mayors for Peace is promoting will be established at many universities in Boston.

Attendance at the second day of the USCM Annual Meeting

At the opening plenary session, Mayor Walsh of Boston welcomed the participants as the host. He referred to the fact that he was born and raised by immigrant parents and stressed that under the current administration’s immigration policy, mayors’ roles are more important than ever, as they represent citizens with various ethnicities and diverse backgrounds.

Mayor Benjamin of Columbia, SC, the incumbent USCM President, talked about the mayors’ shared goals to make sure every citizen can lead a better life through various strategies to improve air quality, providing safer and better environments at schools, and meeting human needs by tackling poverty.

President Matsui also joined an evening event, where he met the Mayor of Beverly Hills, CA, Mayor of Garland, TX, and other mayors, and shared with them our activities and asked them to join Mayors for Peace. 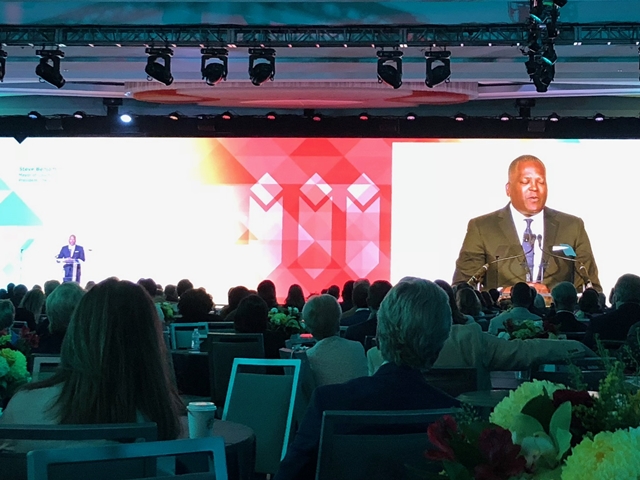 Attendance at the third day of the USCM Annual Meeting

President Matsui attended the standing committee on international affairs, where the participants discussed various resolutions, among which was the one supporting nuclear disarmament and Mayors for Peace activities sponsored by the Mayor of Des Moines. It was unanimously decided that the resolution, which was co-sponsored by 26 mayors―the highest ever since the USCM started adopting resolutions in support of Mayors for Peace―would be submitted to the Plenary where it was unanimously adopted.
（Resolution）

President Matsui had the opportunity to deliver his message at the plenary luncheon, at which an audience of about 300 welcomed him with a standing ovation. In his speech, he stressed that the common challenge faced by all mayors is to ensure the safety and peaceful lives of their citizens, without which world peace cannot be achieved, and introduced that Mayors for Peace is working to that end through working to achieve two key objectives: “Realization of a world without nuclear weapons” and “Realization of safe and resilient cities”. President Matsui expressed his hope that more mayors will join U.S. member cities, led by Des Moines, the U.S. Mayors for Peace Lead City, and engage in proactive activities of their own.
（President Matsui’s speech）

After his speech, a number of mayors came to express their support. President Matsui asked those mayors in attendance who have not joined Mayors for Peace to join, and received favorable responses. 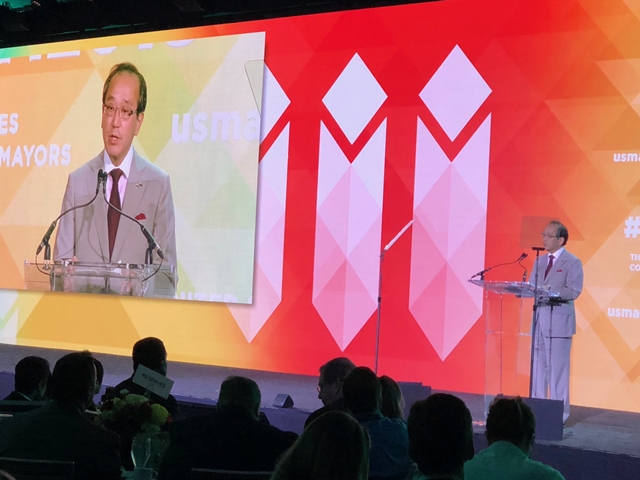 Attendance at a discussion at the Carnegie Endowment for International Peace

President Matsui was invited to participate in a discussion hosted by the Carnegie Endowment for International Peace, a foreign-policy think tank based in Washington, D.C. that has led extensive outreach efforts in diverse fields such as nuclear disarmament and non-proliferation, and addressed about 50 participants including representatives from peace NGOs, journalists, and college students.

In his speech, President Matsui shared the hibakusha’s earnest wishes for nuclear abolition and said that while nobody can predict how the US-North Korea Summit will affect Northeast Asia or how the uncertain future of the JCPOA will affect the Middle East, he hopes for world leaders to engage in earnest dialogue regardless of their political and ideological positions and start seeking to establish a cooperative security policy without reliance on nuclear deterrence as a better long-term solution, one that not only serves one country’s own interest but all of humanity.
（President Matsui’s speech）

President Matsui then joined a panel discussion with Mr. James L. Schoff and Mr. Jon Wolfsthal, who have experience serving at the U.S. Department of Defense and the U.S. Department of State, respectively, as advisors in international security policies and arms controls, and also with Mr. Yasuyoshi Komizo, Secretary-General of Mayors for Peace.

Report of President Matsui’s visit is posted on the Foundation’s website. 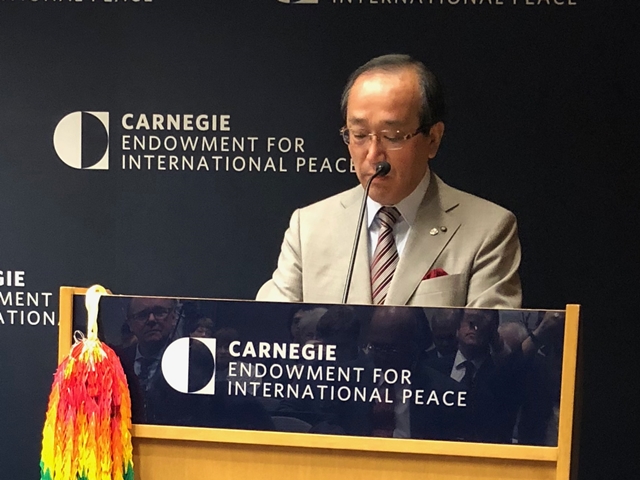 President Matsui met with Mr. Thomas Countryman, Chair of the Board of Directors of the Arms Control Association, a Washington-based think tank and exchanged opinions regarding the U.S.-North Korea Summit and Japan-U.S. relations.

President Matsui expressed his respect and appreciation for Senator Markey’s longstanding efforts in the field of nuclear disarmament. He asked that Senator Markey continue contributing to shaping public opinion in the U.S. in favor of the Treaty on the Prohibition of Nuclear Weapons’ early entry into force and nuclear abolition. President Matsui also asked Senator Markey for his support in membership expansion of Mayors for Peace. 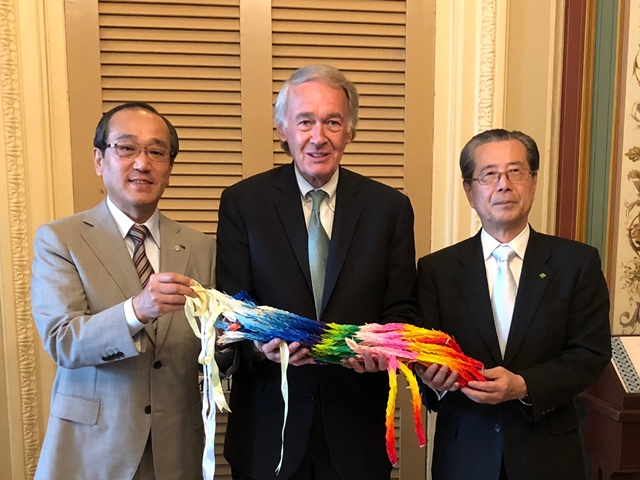 President Matsui shared with Mr. Kazutoshi Aikawa, Deputy Chief of Mission at the Embassy of Japan to the US, that Mayors for Peace will continue to be committed as a non-partisan, non-governmental organization to working for the global public good of nuclear abolition, as he believes that nuclear weapons pose great threat to the safety and peaceful lives of citizens and asked him for support of Mayors for Peace’s activities. 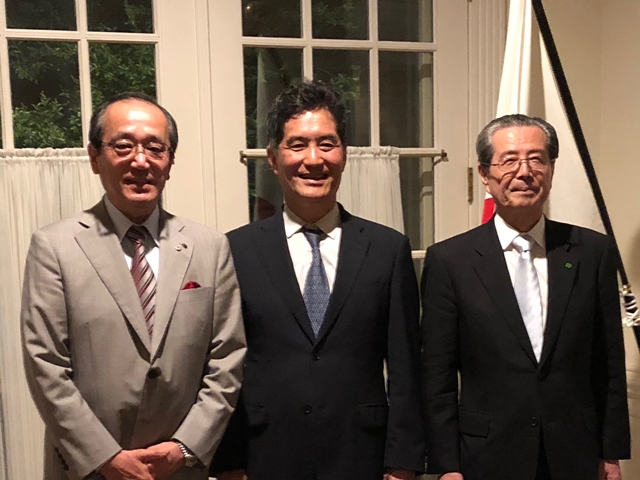