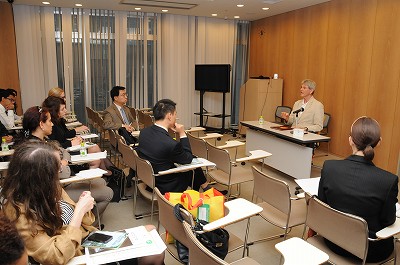 The United Nations Disarmament Fellows visited Hiroshima from September 28 to 30. They learned the realities of the terrible devastation created by the atomic bombing in Hiroshima and received a briefing on Mayors for Peace.

On September 29, as part of the training program, the fellows took a study tour of the A-bomb Dome and Peace Memorial Museum, and received a briefing on Mayors for Peace, which was established in 1982, and the development of its 2020 Vision Campaign, which was launched in 2003, from Chairman Leeper of the Hiroshima Peace Culture Foundation. After the briefing, an impassioned question and answer session was held to discuss such issues as what kind of efforts were needed for the abolition of nuclear weapons by 2020.
Subsequently, the fellows learned the realities of the terrible devastation incurred by the atomic bombing in Hiroshima by listening to Keijiro Matsushima’s testimony on his experience of the A-bombing.
The fellows’ comments included “Experiences in Hiroshima were very impressive. I was moved,” and “I want to make use of what I learned in Hiroshima for my work in the future.”

What is the United Nations Disarmament Fellowship Program?

This is a program to provide young diplomats in the disarmament field, mainly from developing countries with a series of training exercises including visits to the United Nations General Assembly, Conference on Disarmament in Geneva and other countries concerned. The program aims to produce competent professionals in the disarmament field.
After its implementation was decided at the 1st UN Special Session on Disarmament in 1978, this program has been carried out annually since 1979.
At the 2nd UN Special Session on Disarmament in 1982, the Japanese government proposed to invite the fellows to Hiroshima and Nagasaki. Since 1983, Japan has accepted the fellows every year. Commissioned by the Ministry of Foreign Affairs, the Hiroshima Peace Culture Foundation has provided a program to learn about the realities of the terrible devastation created by the A-bombing in Hiroshima.
This is the 30th visit of the UN Disarmament Fellows to Hiroshima and Nagasaki. 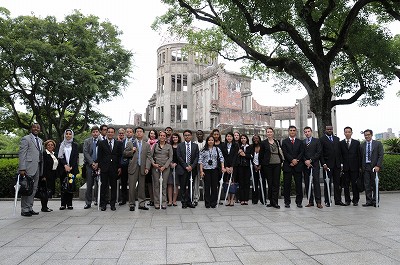 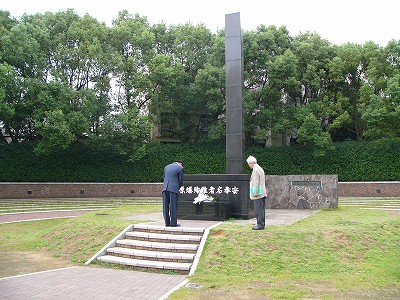 A member of the fellows offers flowers at the Hypocenter of the Atomic Bombing in Nagasaki.

Following the program in Hiroshima, the fellows visited Nagasaki from September 30 to October 1 and learned the realities of the devastation caused by the atomic bombing in Nagasaki.