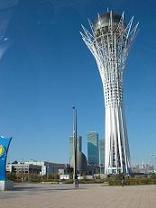 At the Semipalatinsk nuclear test site in Kazakhstan, more than 450 nuclear tests had been conducted for 40 years since 1949 during the era of the former Soviet Union. Without conveying accurate information to the local residents, radioactive contaminations had been repeated and more than a million people were said to be exposed to radiation.

Then, the people of Kazakhstan decided to close the nuclear test site in 1991, almost at the same time as its independence from the Soviet Union, and abolished their nuclear arsenals.

To commemorate the 20th anniversary of the closure of the test site, an International Forum for A Nuclear Weapons-Free World was taken place in Astana, the capital city of Kazakhstan on October 12 and 13, 2011. I attended this forum as the mayor of the A-bombed city Nagasaki, as well as on behalf of Mayors for Peace. My report of the forum including side events is as follows: 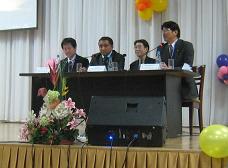 Prior to the International Forum, we hosted an exhibition of photographs about the atomic bombings of Hiroshima and Nagasaki at the Palace of Independence, the venue of the forum, on October 11. Then, we visited Kazakhstan University of the Humanities and Law. Ms. Chiyoko Motomura, an A-bomb survivor appointed as the “Special Communicator for a World without Nuclear Weapons” by the Japanese government, shared her A-bomb experience in front of more than 300 students. I believe that Ms. Motomura’s attitude in actively trying to communicate with the students through her testimony surely left a strong impression on the heart of young people in Kazakhstan. 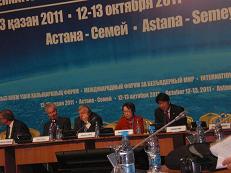 The following day on October 12, “An International Forum for A Nuclear Weapons-Free World” started and I was given an opportunity to deliver a speech during the Panel Session 1 themed “Achieving a Nuclear Weapon-Free World” followed the Opening Ceremony.

I appealed, “by wasting vast amounts of money, time and scientific technology in the development and maintenance of nuclear weapons, rather than securing safety we are in fact putting at risk and threatening the whole world through the existence of these weapons. This is the “reality” that we now face. And if we are going to face up to this reality surely it must be appreciated that it is only the achievement of a world without nuclear weapons that will free our cities from the threat of nuclear weapons and secure permanent safety for international society.”

I also asked all the representatives of both the nuclear states and the nations without nuclear weapons to move towards the abolition of nuclear weapons, including the efforts for the early entry into force of the Nuclear Comprehensive Test Ban Treaty (CTBT) and the early commencement of multilateral negotiations aimed at conclusion of a Nuclear Weapons Convention (NWC). 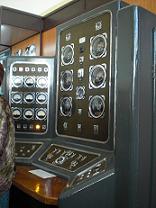 On October 13, as one of the program of the Forum, we visited Semey City, formerly called Semipalatinsk City.
In Kurchatov, a secret city built for nuclear tests, we visited the Museum of Semey Testing Site and saw the exhibits describing nuclear tests. The artifacts include switches for testing, a pig’s head exposed to a nuclear test, organs exposed to nuclear tests and various instruments used for measuring the test results. 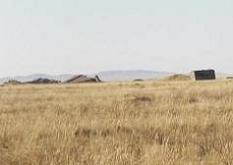 We also visited the nuclear testing site where the first A- and H-bomb tests of the Soviet Union were conducted.

In the midst of a vast wilderness called the Steppes, concrete ruins of observation facilities were scattered across the land. We saw ground zero marked with a red flag approximately 1 kilometer away from where the helicopter we had boarded landed. I was deeply shocked by the fact we were in the place where tremendous damage had been inflicted on the victims by more than 450 nuclear tests. 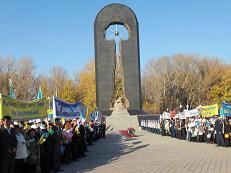 In conclusion of the Forum, approximately 20,000 residents gathered at the park in Semey City, where the “Stronger than Death” Monument to mourn the victims of nuclear tests is located, a public meeting is being held dedicated to the 20th anniversary of the closing of Semipalatinsk nuclear test site.

I delivered a speech in which expressed our sincere hope that “movements by people will spread throughout the world towards the courageous path chosen here in Kazakhstan for a ‘world without nuclear weapons’ ”, and Kazakh people “made the courageous decision to close down the nuclear testing site” and abolish nuclear weapons. Kazakhstan “played a leading role in putting into effect the Treaty of Semipalatinsk, which creates a Central Asian Nuclear-Weapon-Free Zone including Kazakhstan and four other Central Asian countries”. 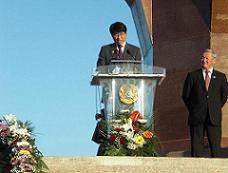 Mayor of Nagasaki Speaking in Semey

During the visit to Kazakhstan this time, especially in Semey, I received cheers from Kazakh people gathered there when they heard the word “Nagasaki”.

I think that was because many of Semey people knew that the Nagasaki Association for Hibakusha’s Medical Care (NASHIM), organized by the City and the Prefecture of Nagasaki, Nagasaki University and others, has been sincerely providing medical care for the radioactive victims in the areas contaminated with radiation. As the mayor of the atomic-bombed city Nagasaki, I am very proud of their efforts.

At the same time, I renewed my determination to achieve a world without nuclear weapons as soon as possible, through conveying the horror of nuclear weapons. in cooperation with Kazakhstan.