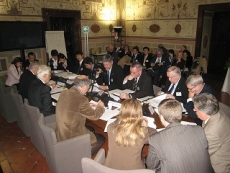 The 7th Executive Conference of Mayors for Peace was held in the city of Florence, Italy.

Approved to launch 2020 Vision Campaign as the NPT Review Conference Preparatory Committee Meeting will be taken place around the same time, determined the direction for campaign structure and fund raising.

In addition hold the Seventh General Conference in Nagasaki in August 2009 as well as adopt the Resolution on the Abolition of Nuclear Weapons and the Final Communique.

In this conference, 9 cities participated out of 12 Executive Cities, engaged in active debates in order to encourage activities of Mayors for Peace even more.