We formed Mayoral Delegation of member cities of Mayors for Peace and participated in the NPT Review Conference held in Vienna, Austria. At the NGO Session, President Akiba delivered a speech and appealed to the international community for the abolition of nuclear weapons. He also proposed to the member states of the Conference on Disarmament to start negotiations for the Fissile Material Cut-off Treaty and called the nuclear-weapon states for starting negotiations for nuclear disarmament and to freeze the development of nuclear weapons. On this occasion, the delegation met with some government representatives that participated in the conference and handed over letters of request addressed to the presidents and prime ministers of nuclear-weapon states. During their stay in Vienna, the delegation also visited among others the CTBTO (Comprehensive Nuclear Test Ban Treaty Organization) and the IAEA (International Atomic Energy Agency). 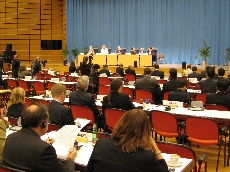 The Mayoral Delegation attended the First Preparatory Committee held in Vienna directed at the 2010 NPT Review Conference. At the beginning of the opening ceremony, Yukiya Amano, Ambassador of the Permanent Mission of Japan to the International Organizations in Vienna, who acted as chairman of the committee mourned in his speech the late Iccho Itoh, former mayor of Nagasaki, and all participants offered silent prayers. 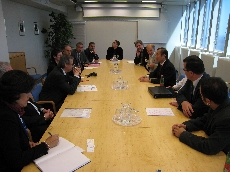 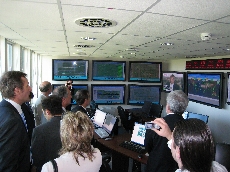 Mayoral Delegation visited CTBTO (Comprehensive Nuclear Test Ban Treaty Organization). The group met with Ambassador Tibor Toth, Executive Secretary of the Organization, and asked for further cooperation for the Mayors for Peace activities. The representatives also visited the monitor room and deepened their understanding of the activities of CTBTO. 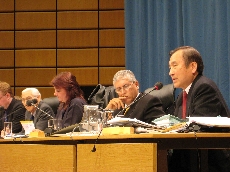 President Akiba gave a speech at the event of launching the “International Campaign to Abolish Nuclear Weapons (ICAN)” organized by the IPPNW (International Physicians for the Prevention of Nuclear War). He made an appeal for the importance of the collaboration between mayors and physicians and the mutual cooperation in the “Cities are Not Targets” project promoted by Mayors for Peace. 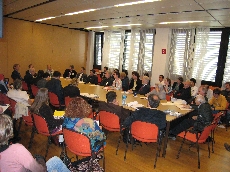 Mayors for Peace held a workshop with the International Association of Peace Messenger Cities and called for the building of a framework for the abolition of nuclear weapons and the cooperation with mass media. 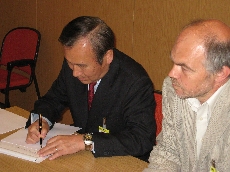 Mayoral Delegation held a signing ceremony for the proclamation of the “Cities Are Not Targets (CANT)” project and received signatures of all who attended. 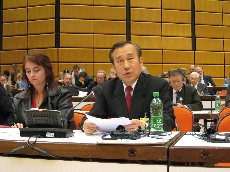 President Akiba delivered a speech at the NGO Session at the NPT PrepCom where government representatives listened to the opinions of NGOs. He also asked the member states of the Conference on Disarmament to start negotiations for the Fissile Material Cut-off Treaty and proposed to the nuclear weapon states to begin negotiations for nuclear disarmament and to freeze the development of nuclear weapons for 5 years. 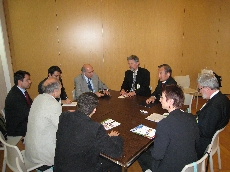 During its stay in Vienna, Mayoral Delegation had a meeting with the various government representatives participating in the PrepCom. Mayoral Delegation explained the activities of Mayors for Peace and handed over letters of request addressed to the presidents and prime ministers of nuclear-weapon states. The photo shows the group making an appeal to the Ambassador of Turkey. 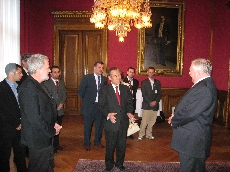 Mayoral Delegation paid a visit to the Mayor Haupl of Vienna and requested to strengthen the further collaboration. It also asked for his assistance to get the resolution of support for our “Cities Are Not Targets (CANT)” project at the CEMR (Council of European Municipalities and Regions). CEMR is the largest association of self-governing bodies in Europe and is currently presided over by the mayor of Vienna.