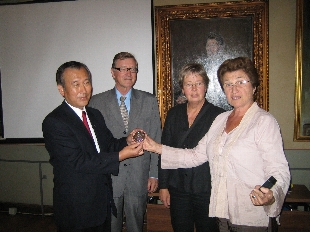 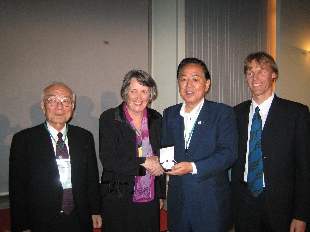 The international peace NGO IPB has given Mayors for Peace its Sean MacBride Peace Prize in recognition of its achievements in arousing international public demand for the abolition of nuclear weapons and lasting world peace through the 2020 Vision (Emergency Campaign to Ban Nuclear Weapons) and other global peace promotion activities.

In explaining the award, IPB Chairwoman Cora Weiss also expressed great expectations for continued Mayors for Peace campaigning and the desire for closer cooperation with IPB.

Chairwoman Weiss presented a medal to Mayor Akiba, president of Mayors for Peace. The same medal was presented by former IPB Vice Chairwoman Kate Dewes to Mayor Itoh of Nagasaki at the Global Citizens’ Assembly held in Nagasaki in October.

IPB is an international NGO founded in 1892 to work toward a world without war. It is based in Geneva, Switzerland. In 1910, it received the Nobel Peace Prize. Today, it is actively promoting peace in 70 countries, working toward “Sustainable disarmament for sustainable development.”

Sean MacBride of Ireland was chairman of IPB from 1968-74. He was president from 1974-85. In honor of his many achievements, an award in his name is given to individuals or groups that show outstanding achievement in the fields of peace, disarmament and human rights. The award was established in 1992 to commemorate the 100th anniversary of IPB.